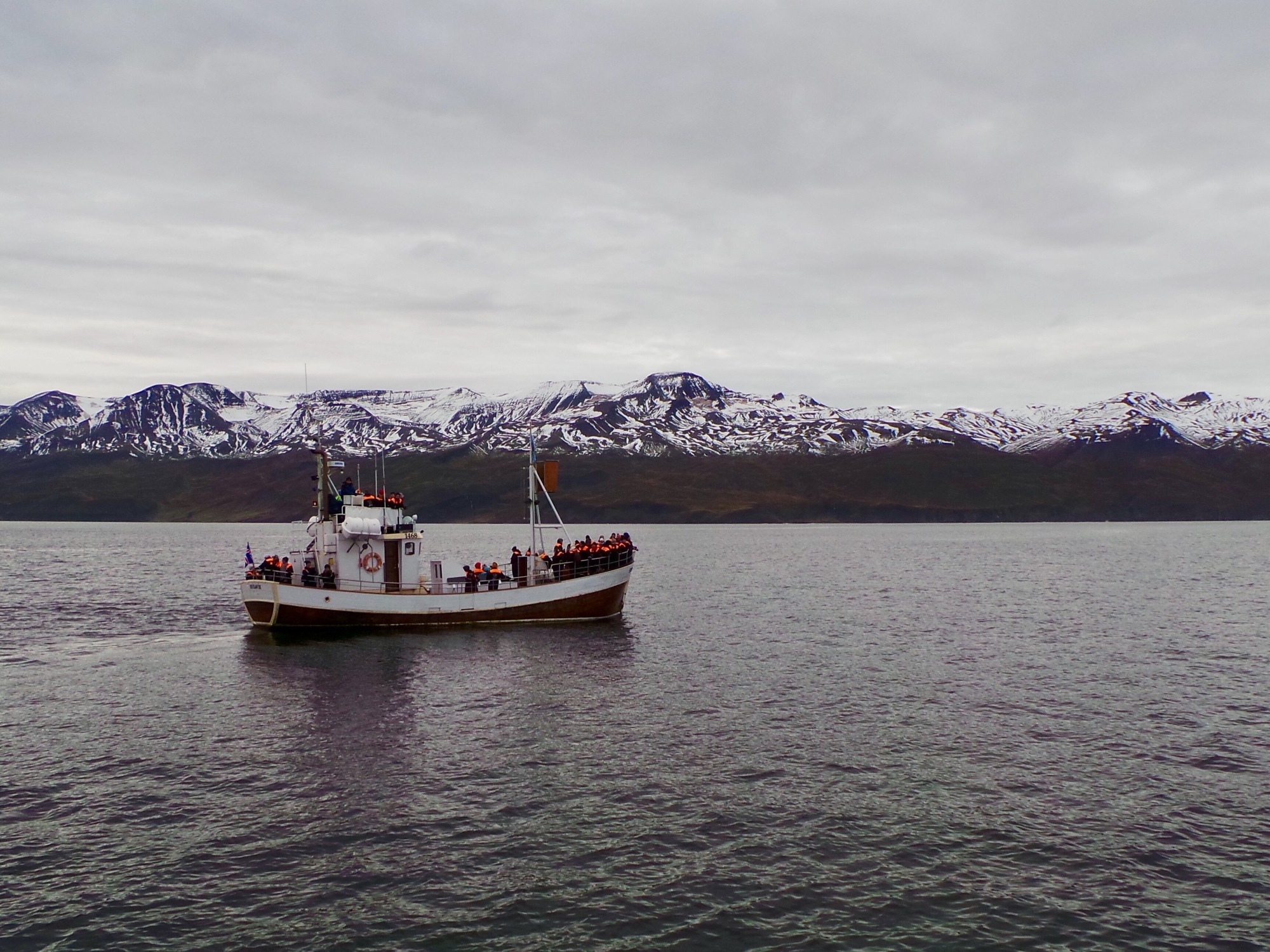 We enjoyed an early Icelandic Breakfast in the hotel before a short drive to the Krafla volcanic area, in particular the Crater. We were first there so Josh got to fly his drone and capture footage without tourists except us 😂 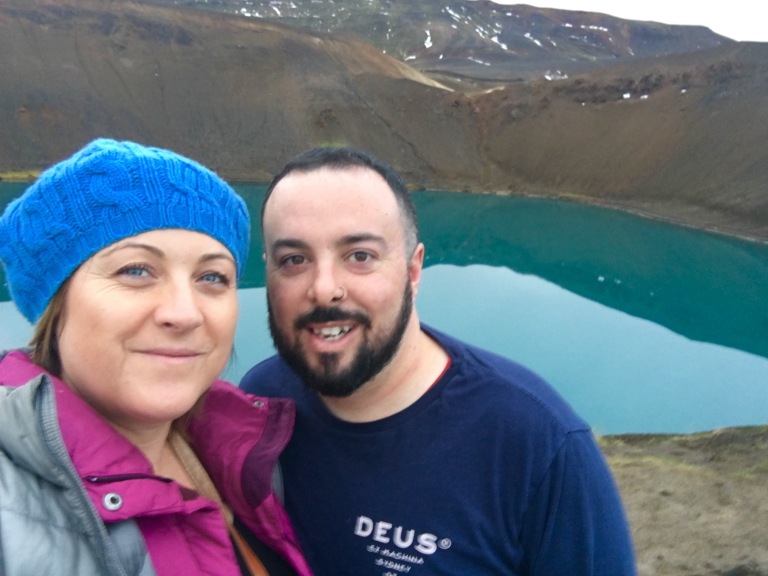 The area has a lot of geothermal activity and is home to the Krafla Power Plant. Even this is other worldly, with steam rising from fissures in the earth and streams and  holdings that look like space ships.  🚀 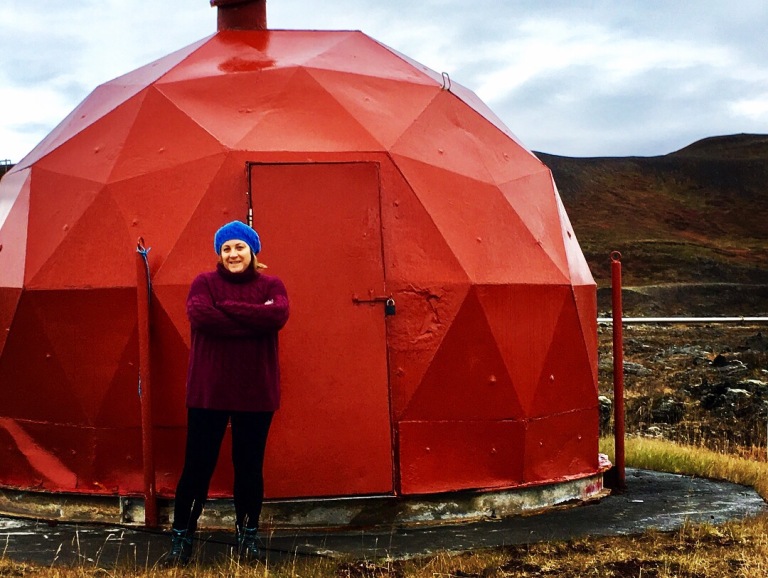 We stopped by the road side to clean our muddy shoes in the snow and ended up having an impromptu snowball fight. Guess who started it?

Drive to Hùsavik for some Whale watching.

What an adventure! The boat used the age old method of whale spotting – head straight to where the other boats are. They don’t use sonar equipment or anything that can disturb the whales. We suited up in some warm floatation suits and headed toward the snow capped shore across the harbour. 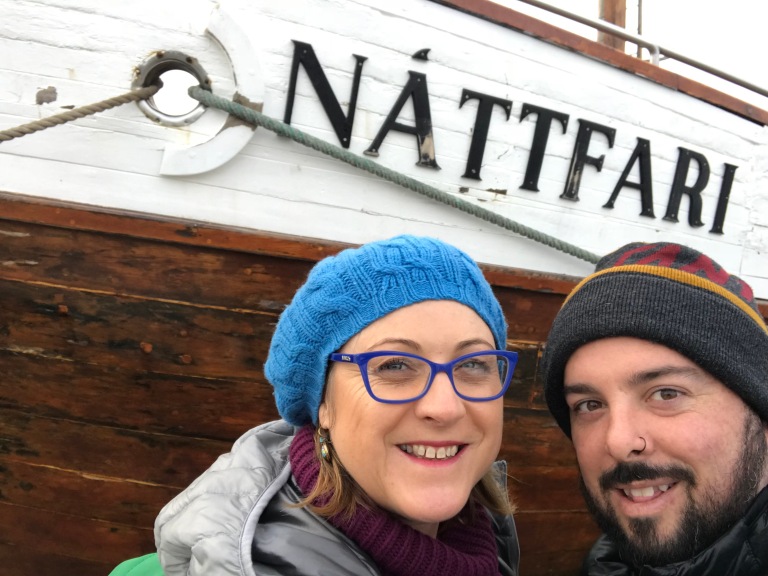 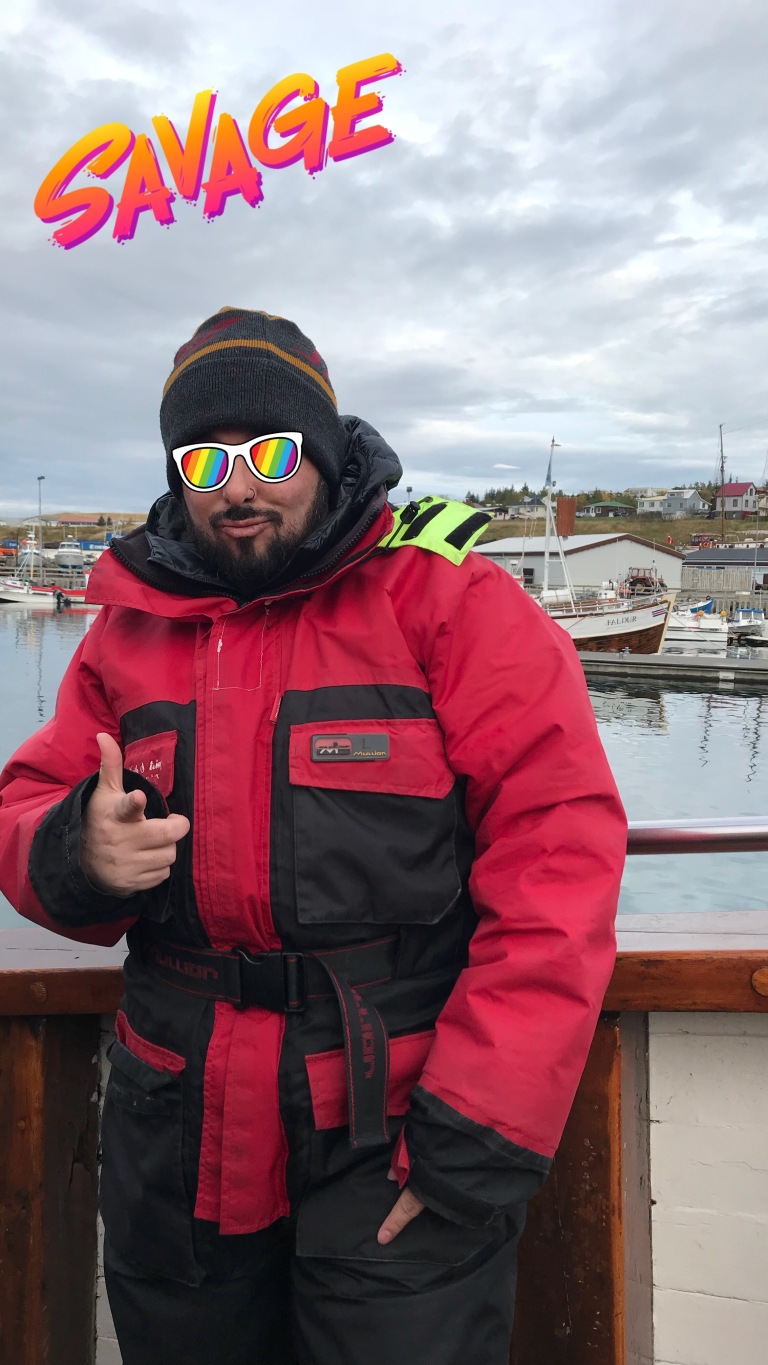 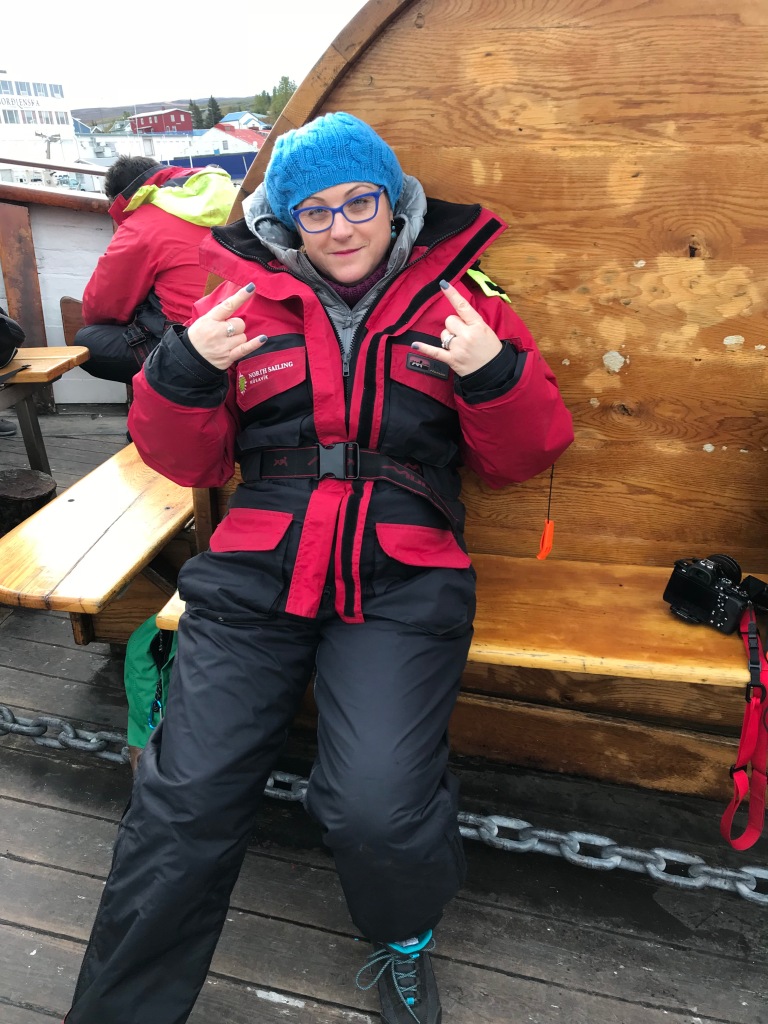 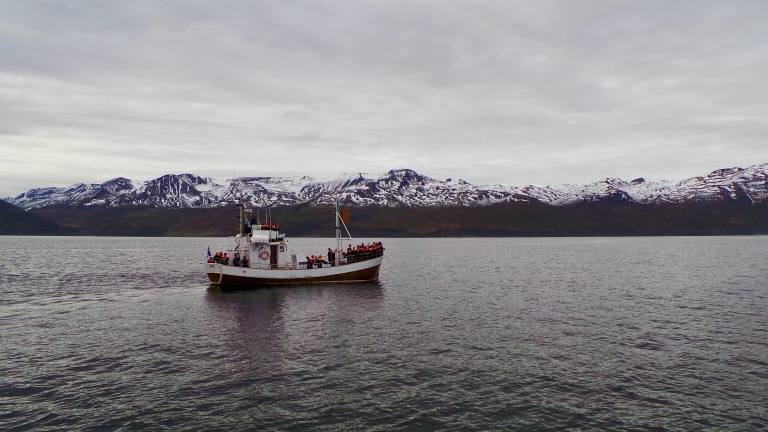 You hear the whale before you see it. The gush of water spraying into the air and the the splash as they rise to take a breath. They do this 3 or 4 times and then you see them arch their back to dive and it’s then that their tale is on magnificent display. 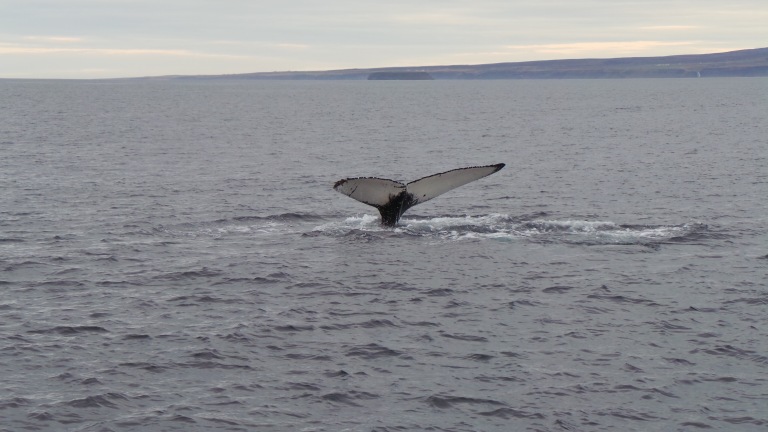 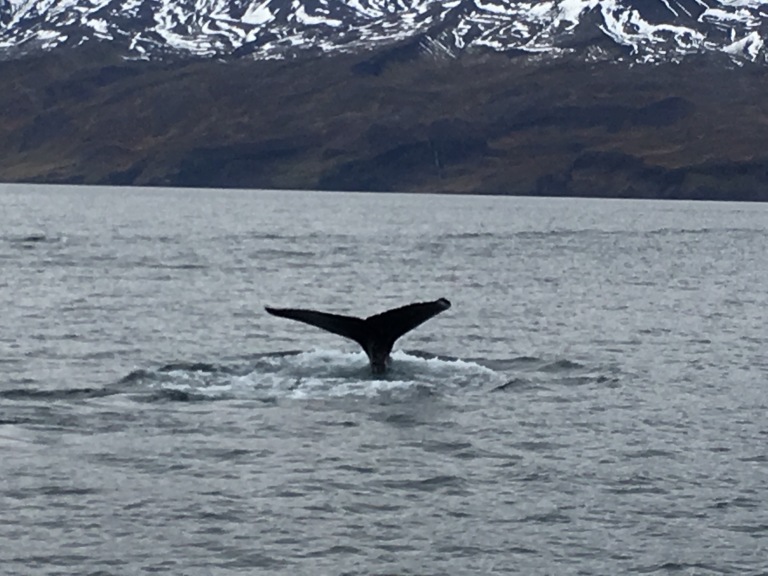 They stay down for about 10 minutes feeding on the krill and then rise again – surprising us by sometimes being closer to the boat. They are very curious creatures. We watched two humpback whales do this for about an hour before saying goodbye to see what else we could find.

As luck would have it we came across a Minke whale and another lone humpback before  enjoying a mug of hot chocolate and a cinnamon roll and heading to harbour. 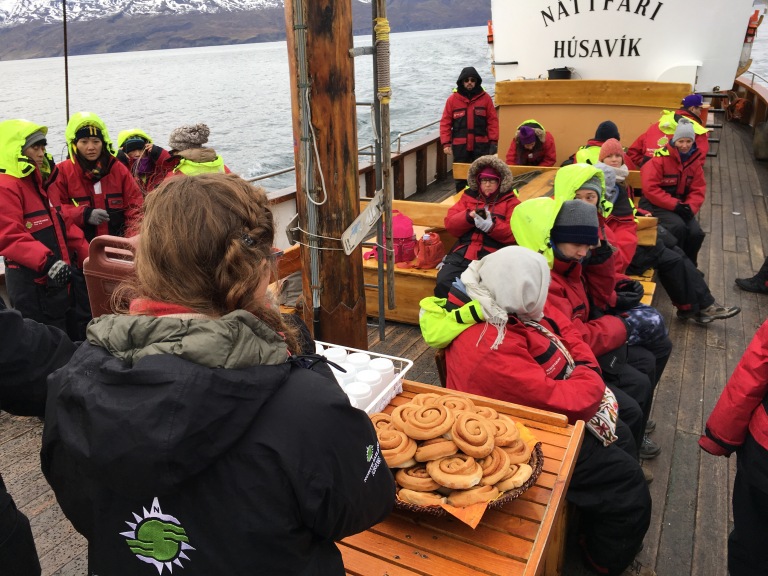 It really was a wonderful experience to see these gentle giants up close in the wild where they should be.

You guessed it, we had a hotdog for lunch before heading to our next stop.

We stopped at this beautiful lake to fly the drone. I explored the nearby ‘forrest’ and may or may not have flashed at the drone 😝 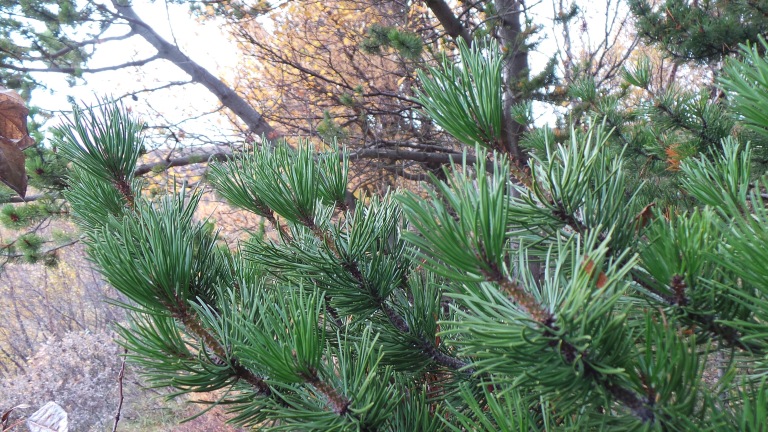 Was a favourite of Josh’s last year so we stopped again as it was a rain free afternoon and mild outside. 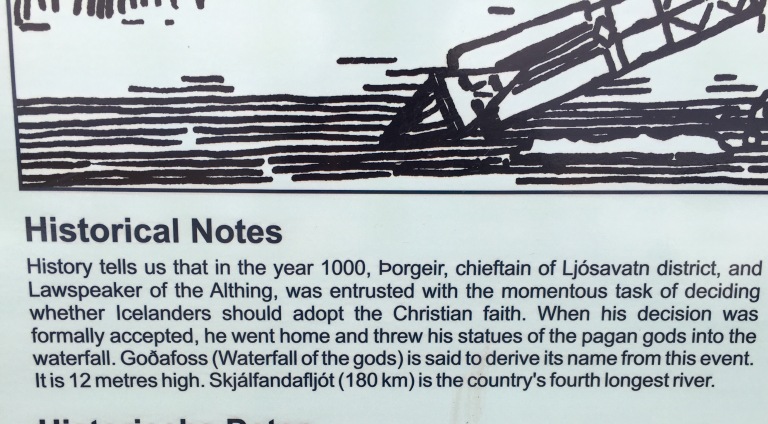 A quick stop as it was dark last time we were here. 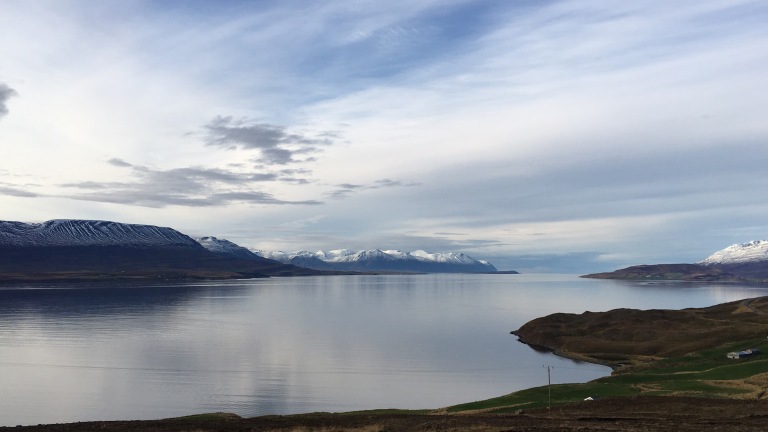 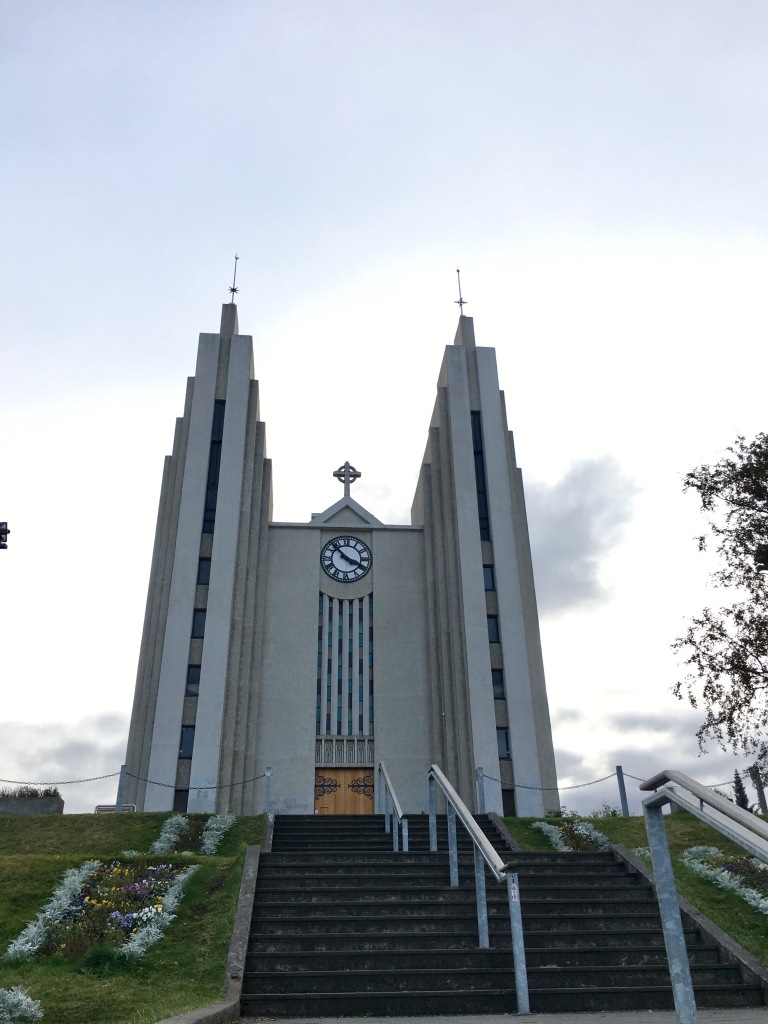 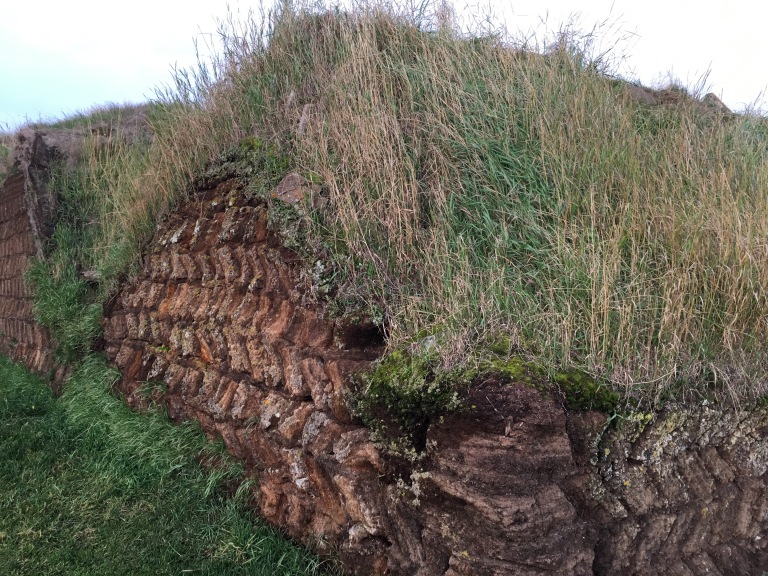 The farmhouse is built of turf, stones, and timber. The walls are built of stones and of pieces of turf layed up in a herringbone pattern, with long turf strips between the layers. The Glaumbær estate provided little rock suitable for building purposes, but it has plenty of good turf, so the walls of the farmhouse contain relatively little rock; it was used only at the base of the walls to prevent damp from rising up into them. Imported timber and driftwood were used in the interior frame and paneling.

Parts of the farmhouse date to 1750 while the youngest parts are 1870s. The church beside it was built in 1926. It’s the type of home depicted in Burial Rites, the novel by Hannah Kent.

We passed through the Blackulous valley from last year 😂 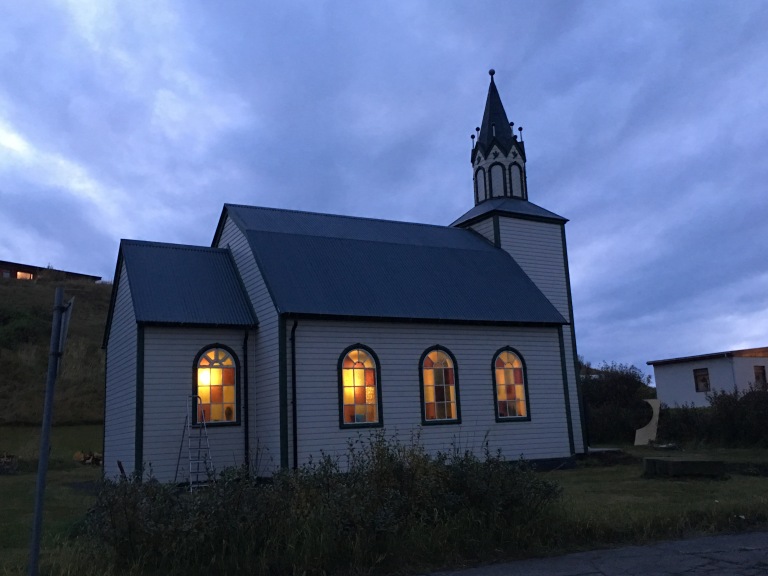 Our final stop was Blönduós where we are staying at a charming guest house on the beach. 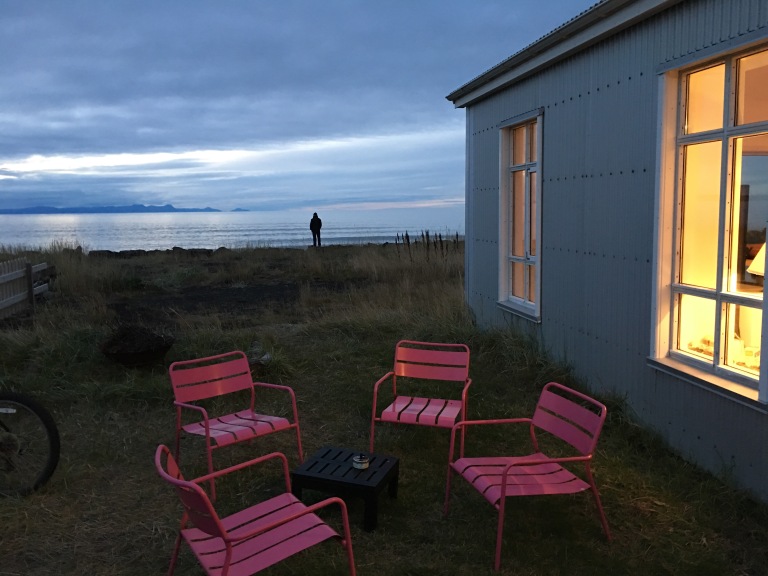 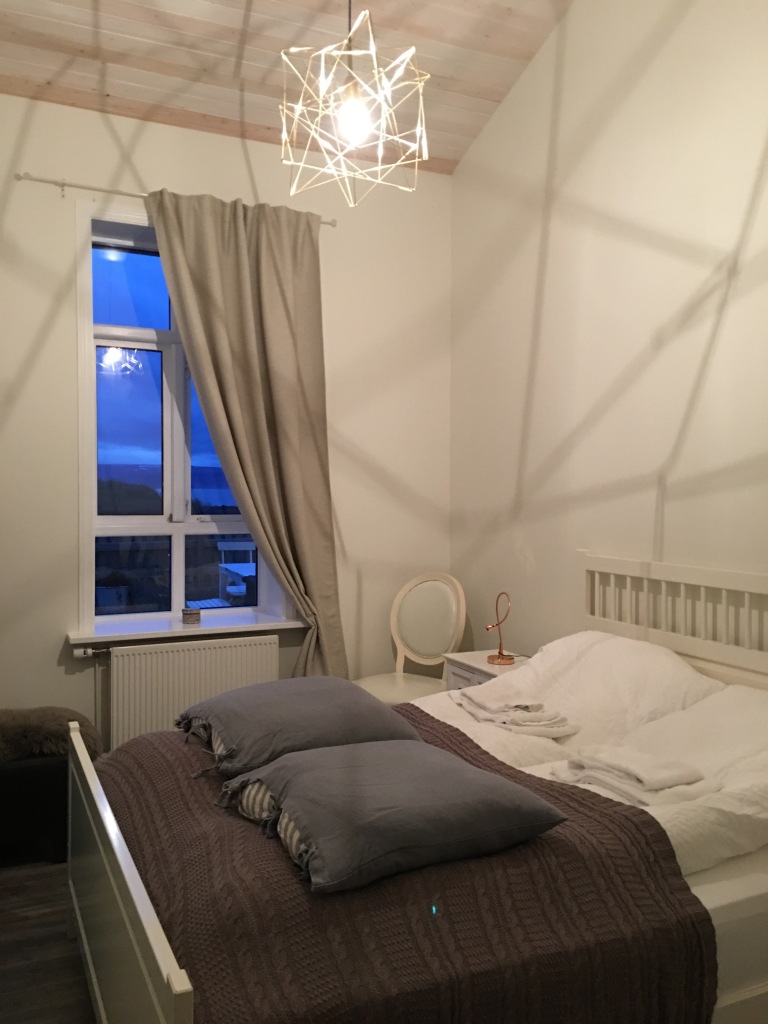 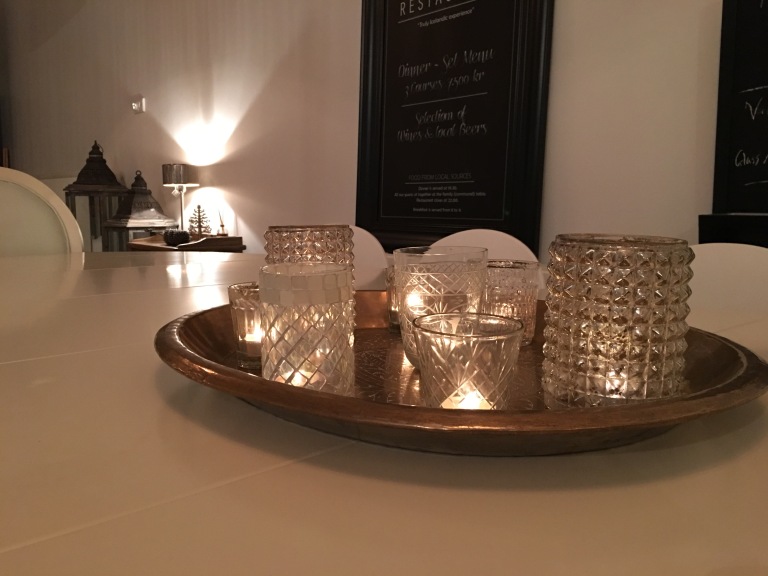 There are other guests here and we share a bathroom which will be a tad awkward in the morning.

We also had a gastronomic feast prepared for us and as each course was presented our host and chef explained each ingredient and told us some history and culinary history as well.
﻿ 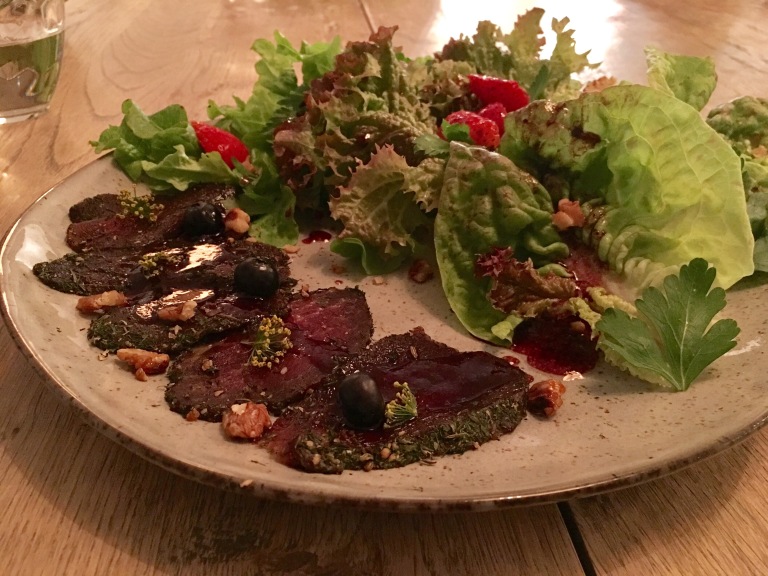 Reminiscent of the Icelandic landscape.

Flourless Chocolate cake like the cracked surface of the earth dusted with blueberry powder; Skyr and cream for the glaciers – sprinkled with lemon thyme; Berry coulis  –  strawberries, red currants and black currants. 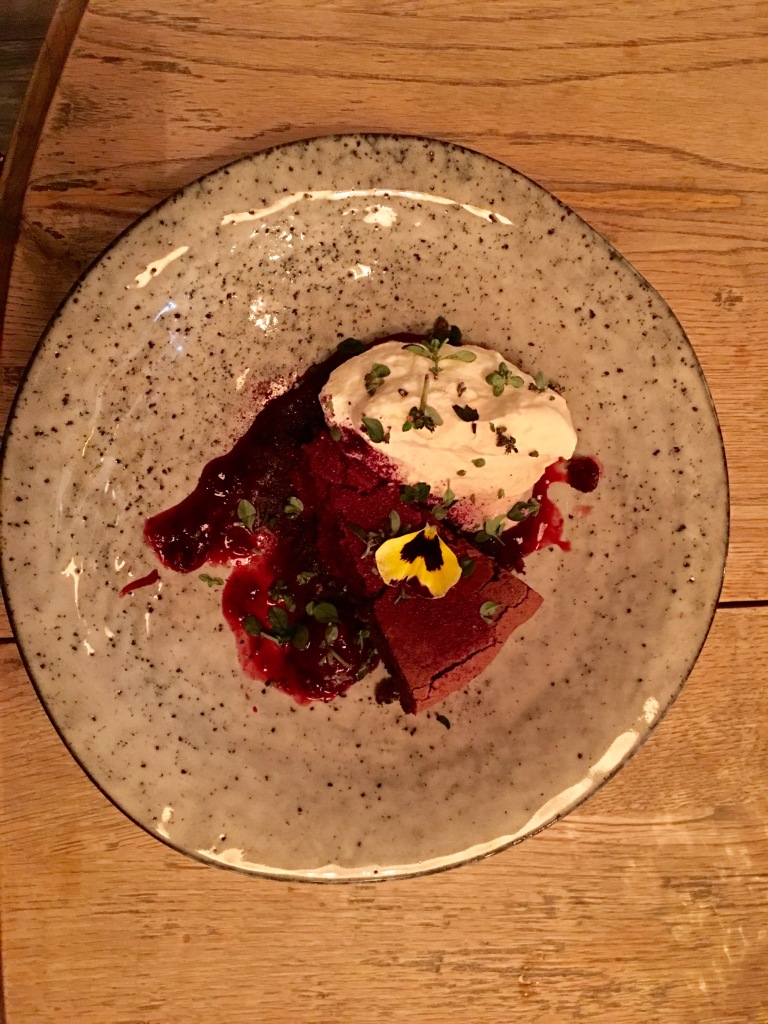 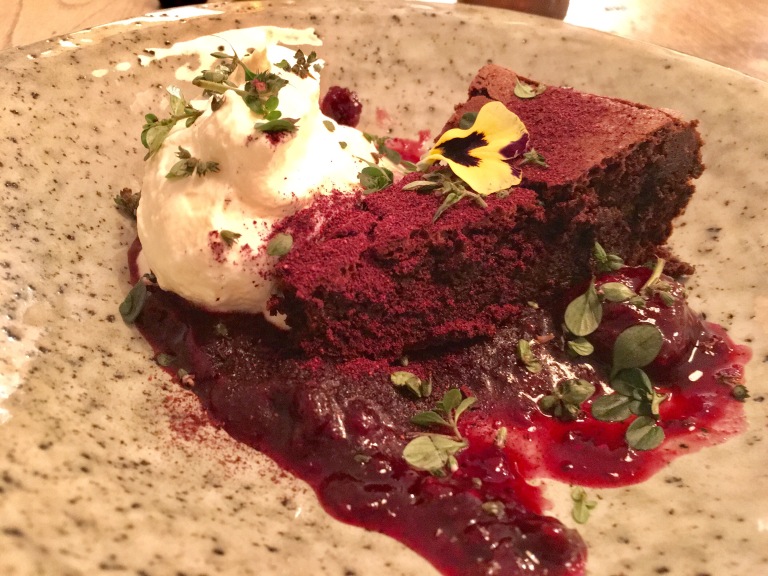 What a feast!  We headed to bed with full bellies.