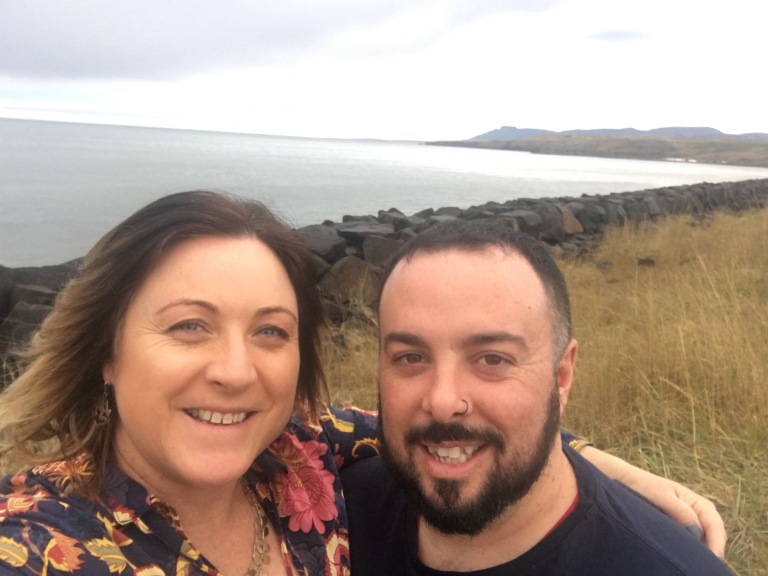 My birthday and a tour of Burial rites locations in the Vatnsdalur Valley.

“Illugastadir, the farm by the sea, where the soft air rings with the clang of the smithy, and gulls caw, and seals roll over in their fat. Illugastadir, where the night is lit by fire, where smoke turns in the early morning to engulf the stars, and in ruins, always Illugastadir, cradling dead bodies in its cage of burnt beams.”
The story:

Illugastadir was one of the most historic places on the Vatnsnes Peninsula in he 19th century. It was home to to the herbalist and womanizer Natan Ketilsson (1795-1828) and the place where he was murdered in his bed, alongside the convict Pétur Jónsson on the eve of 13 March 1928.

Natan had many affairs and a number of children with several women. He moved to Illgustadir in 1926 and hired two women and had affairs with both.the first was a 15 year old girl, Sigridur Godmunssdottir and the other was Agnes Magnúsdottir who was around 30, beautiful and clever and hoped to become mistress of the house and Natan’s wife. Natan made Sidridur mistress and was more attentive and tender towards her, which made Agnes feel deeply betrayed.

Fridrik Sigurdsson was besotted with Sigridur and he was ruthless and vindictive. Agnes wished to be avenged and did all she could to match Fridrik and Sigridur and make him clash with Natan. On the evening of the 13th march the hatred reached fever pitch and the theee of them murdered Natan and Pétur and set their bodies on fire and burned the homestead down to disguise their cause of death. Agnes alerted another farmhouse to he fire and said Natan and his guest had died in the flames. Once the fire was out peolw became suspicious and looking closer they discovered the stab wounds on the badly burnt corpses.

Agnes and Sigridur were taken to the district commissioner where they admitted to abetting he deaths of the two men. They said the deed itself had been committed by Fridrik who was also arrested. He denied any wrongdoing to begin with but confessed being a party to the crime after being persuaded to do so by the priest at Tjörn.A trial followed and the accused were sentenced to death. Sidridur was pardoned and transported to serve a prison sentence in Copenhagen.

The current farmhouse is located on the site of the original building and the only remains are the remains of Natan’s workshop where he mixed the tinctures and remedies that he used in his medical practice. 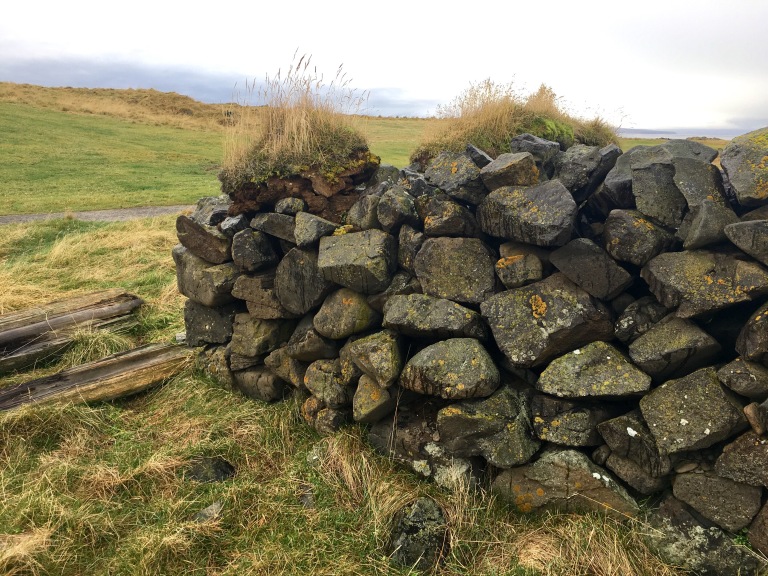 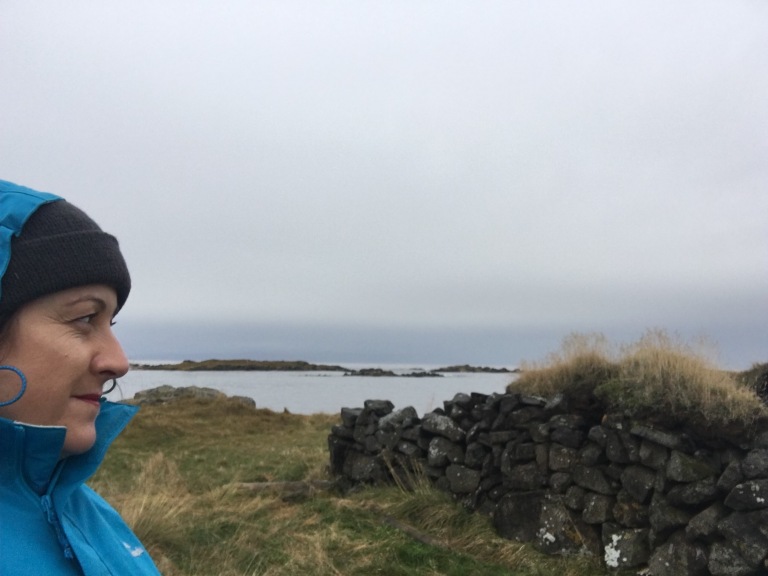 We wandered along the sea shore and spotted a seal who swam closer to us to say hello.
Sheep bleated about us and at one stage I thought we would have to rescue this one, but then she figured it out.

The farmhouse where Agnes stayed with a family before her execution.

The preserved baðstofa of Glumbær that we saw yesterday is what the farmhouse would have been like.

Whilst considerably larger and more comfortable than most baðstofas typical of farming families in the early nineteenth century, it nevertheless shows how Icelanders would sleep (often more than one to a bed) in close quarters with one another.

Þrístapar: The Site of Execution

Þrístapar is group of three small hills on the north side of the road, the site of the last execution in Iceland.

Agnes and Fridrik were beheaded here in Vatnsdalur Valley on 12 January 1830 in front of a huge crowd. The district commissioner’s command, “Nobody may look away”, is famous in Icelandic history. The executioner was Natan’s brother who legend says the district commissioner pressured into doing so. He donated his payment to the poor and called it blood money. After the execution the heads were placed on spikes and their bodies buried nearby.

The Church at Tjörn 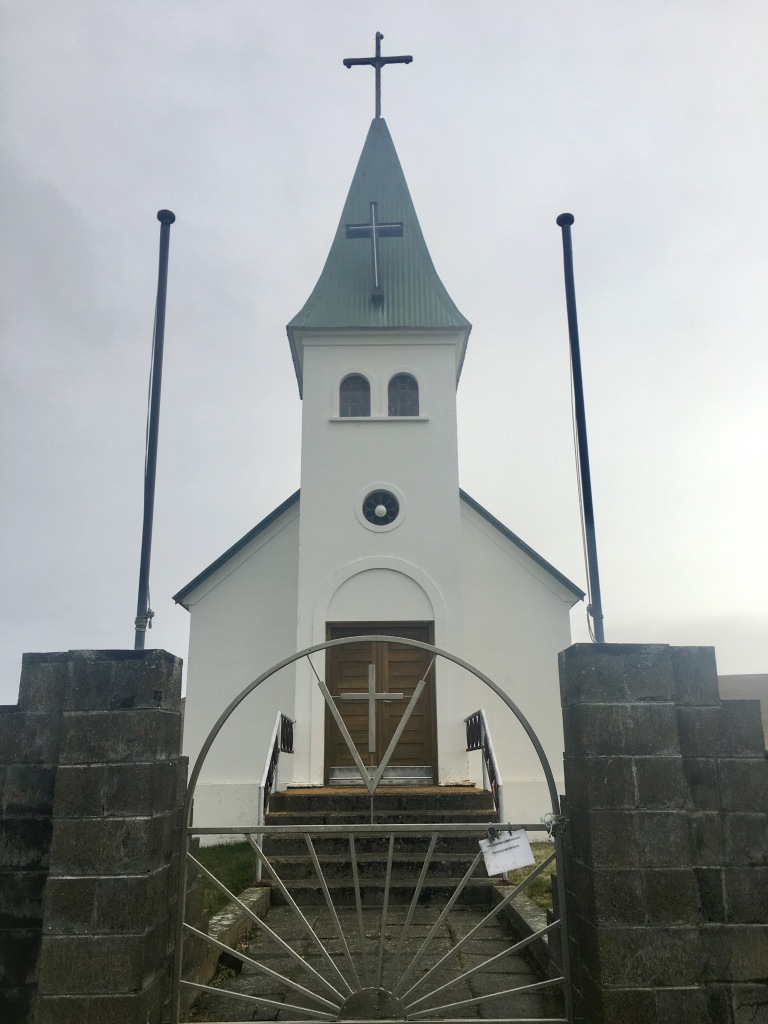 Later the heads were buried together at the church in Tjörn. Natan and Pétur are also buried here but the graves are no longer marked.

That brought our Burial Rites tour to an end and the beginning of our tour of the West Fjords where not many people get to. 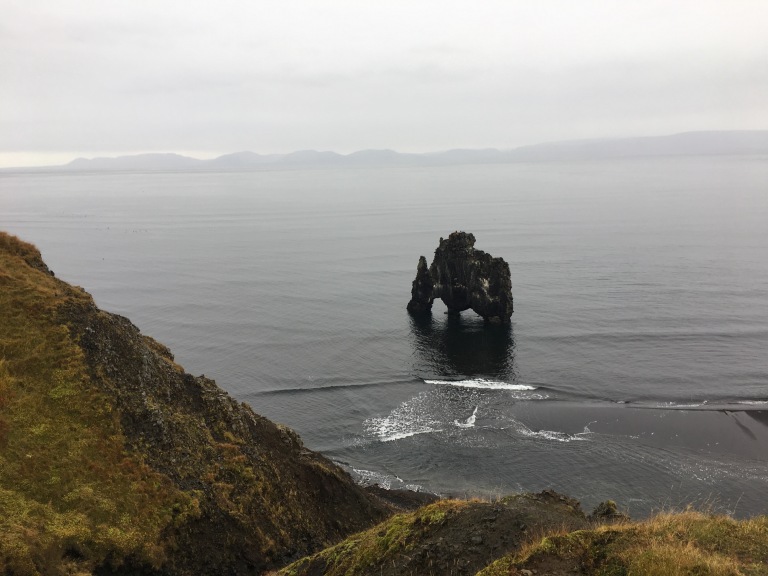 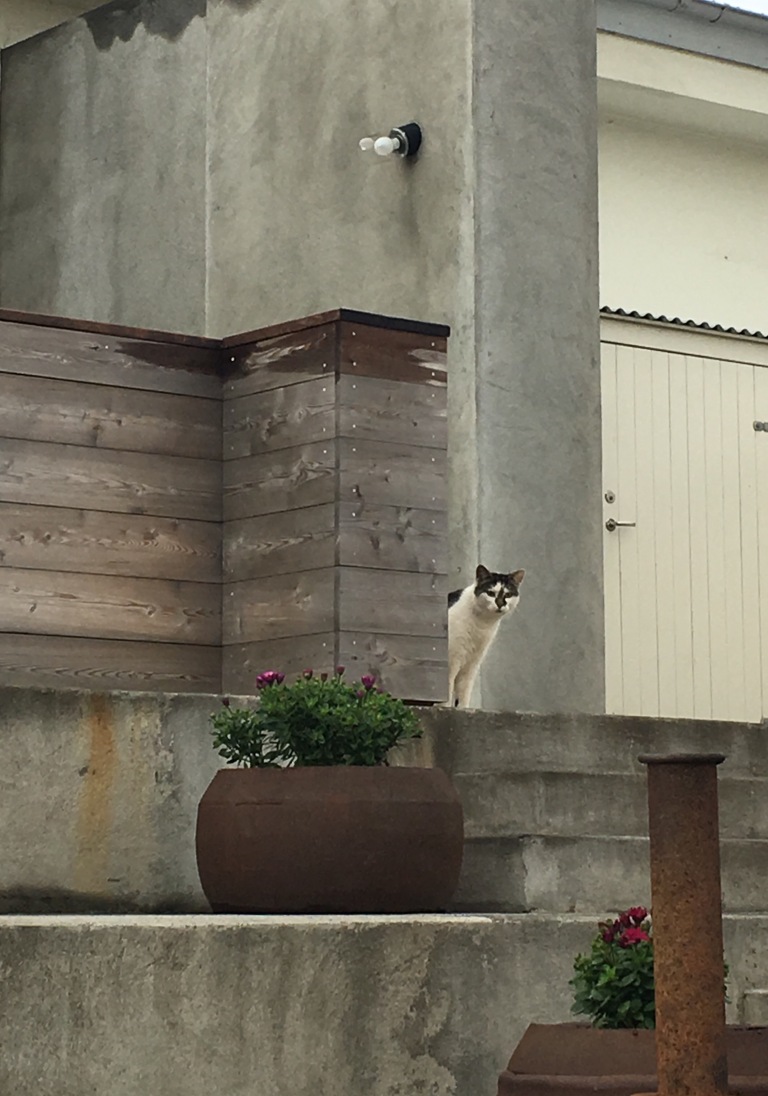 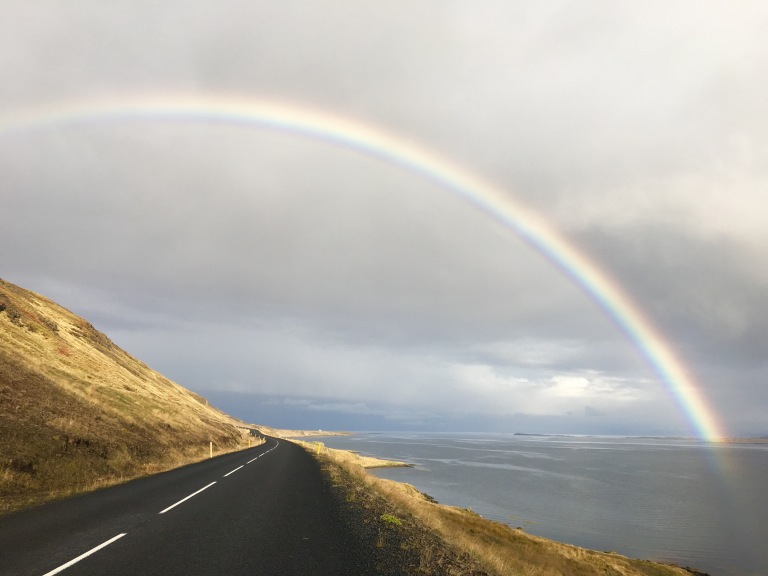 Car got a bit dirty today. Lots of the roads are unsealed.

We visited the Museum of Icelandic sorcery ( not as bad as you’d think!) interesting history of witches being burned in this part of the country. It’s always been the hardest to get to therefore the least populated.

The scenery feels very much like Scotland. There is even a type of heather.

We were just driving through the fjords and I spotted a whale! It was a lone minke. Josh got the drone out and we saw it dive and come up further down but we eventually lost it. How exciting to see one so unexpectedly 😍

We were greeted by an African grey parrot saying ‘hello’ and mimicking the phone ringing!

Lovely rustic place with some hot springs and a pool. 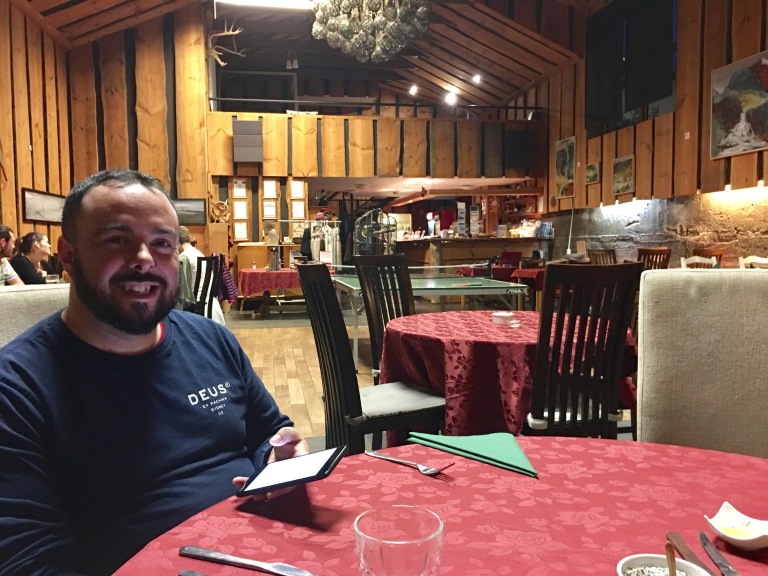 We went for a pre-dinner walk and made a friend. 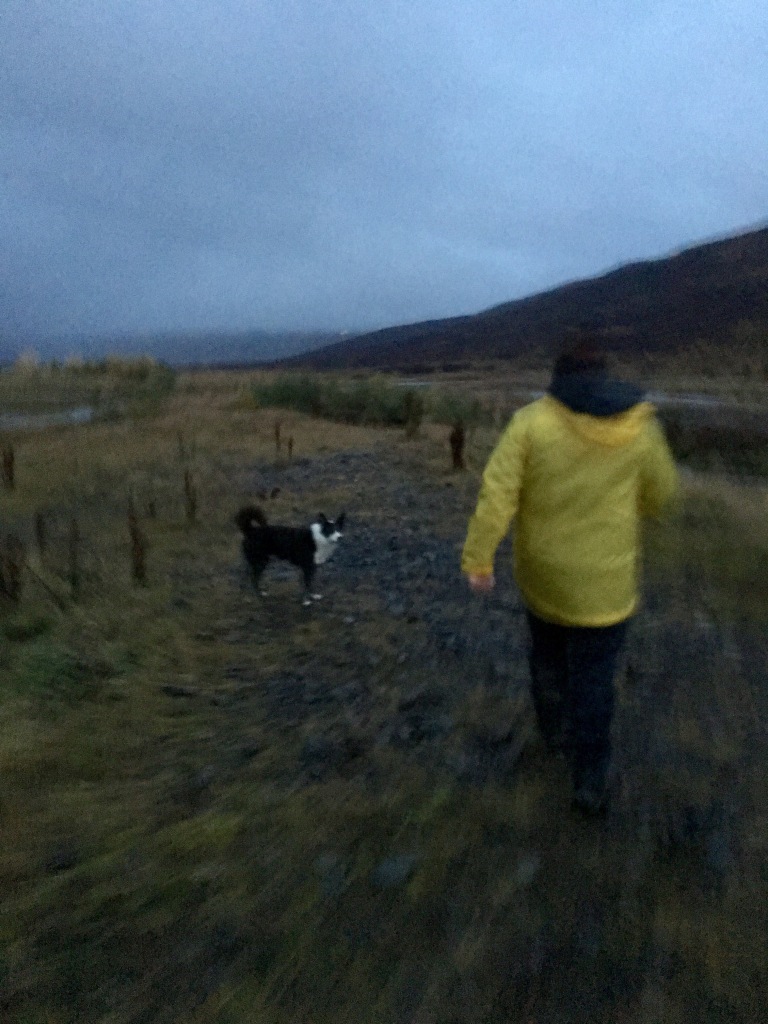 We watched Iceland win their game and get into the World Cup for the first time ever!

Then we ventured out into the dark, stumbling over rocks to find the hot springs.  We could hear the horses around us which was kind of scary! The moon was rising and still quite full. We found the springs and had some wonderful time together under the yellow moon reflecting in the fjord, surrounded by the outlines of Icelandic horses. 🐴

“And though the snow smothered the valley and the milk froze in the dairy, my soul thawed.”