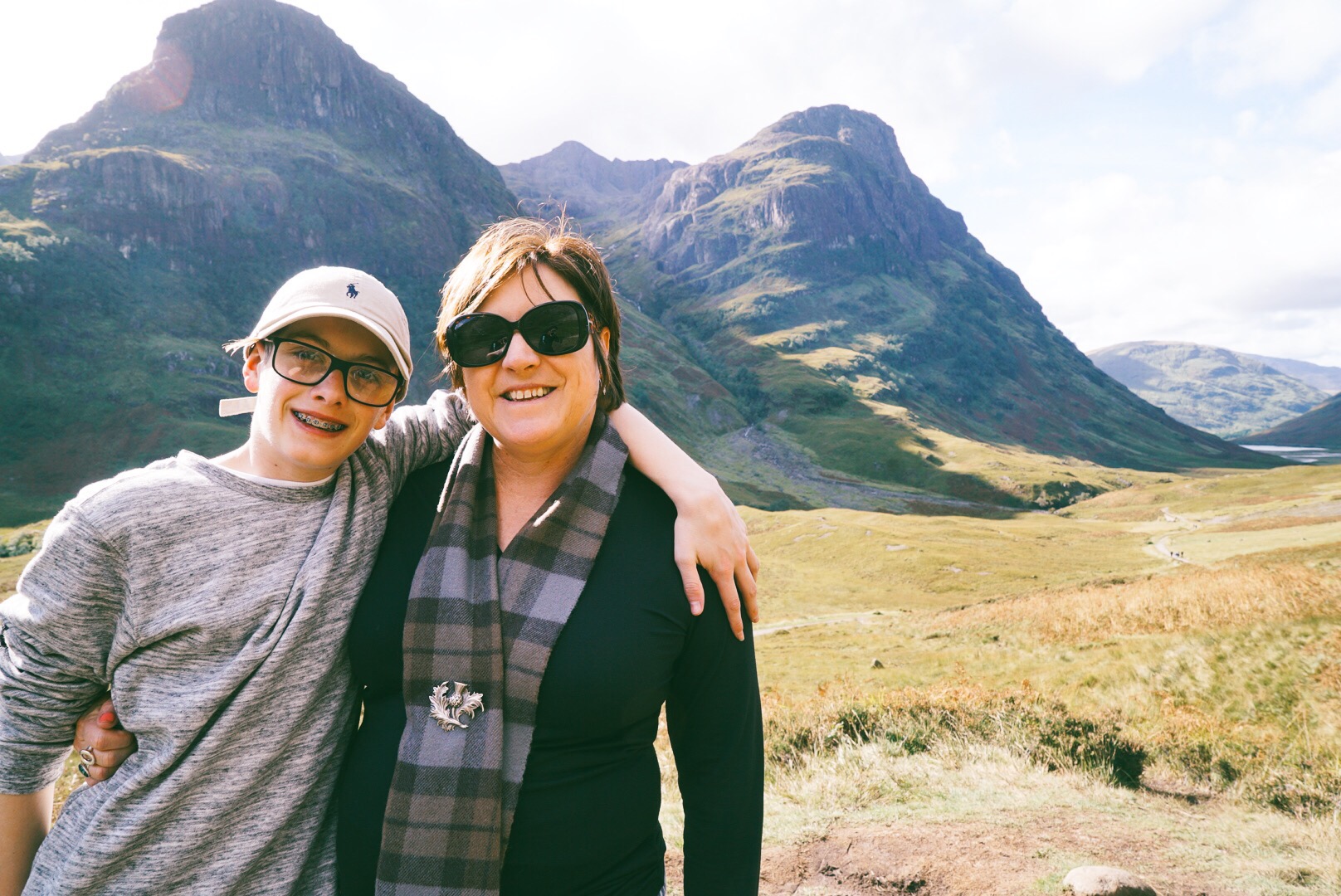 Day 9: Through the highlands to the lowlands and Glasgow

Sun is shining! Thanks Skye for the final view.

First stop Eilean Donan Castle which literally means ‘the island of the Donan’. It was originally a 13th century castle of yet clan Mackenzie buy it was destroyed by English ships that sailed up with canons and blew it up after the Jacobite rebellion and the Battle of Culloden. The Castle was rebuilt.

It’s been used in many movies. I remember it in Hughlander before CGI was around to ad bits and pieces. While we were there today the was a film crew from Outlander Season 3. They were filming from the road bridge so it looks like the castle and backdrop will be used for an establishing shot (and those of you who have been taught about film techniques in English class when studying film texts) will know what I’m talking about. 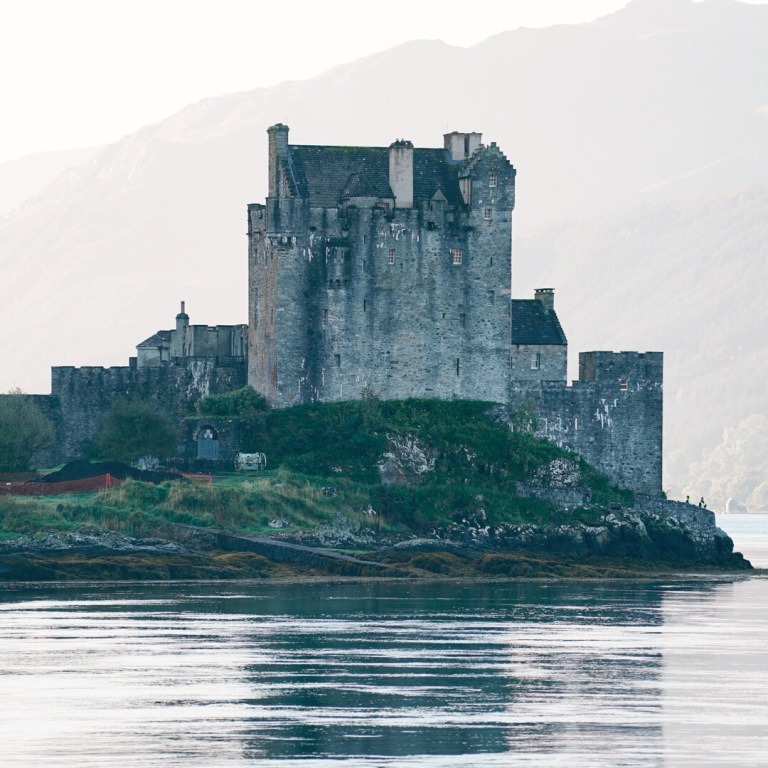 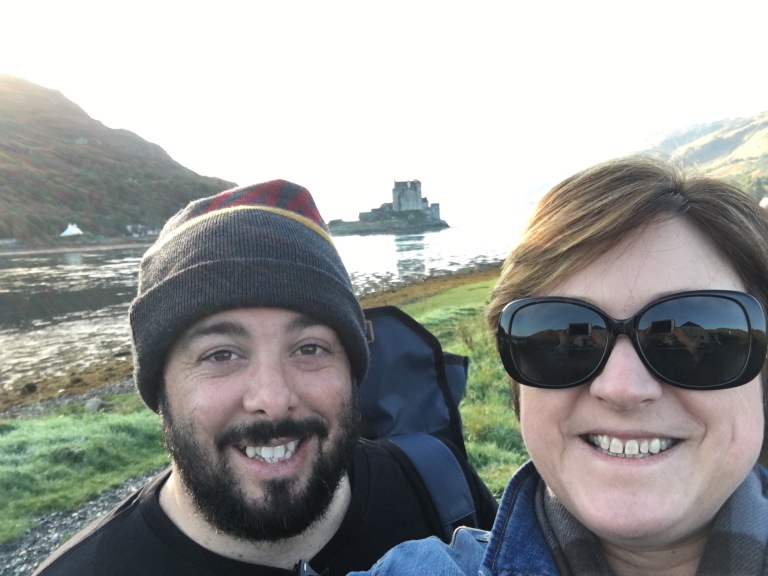 We drove to Mam Ratagam for a view where we also saw a random toilet which made for great photo ops. 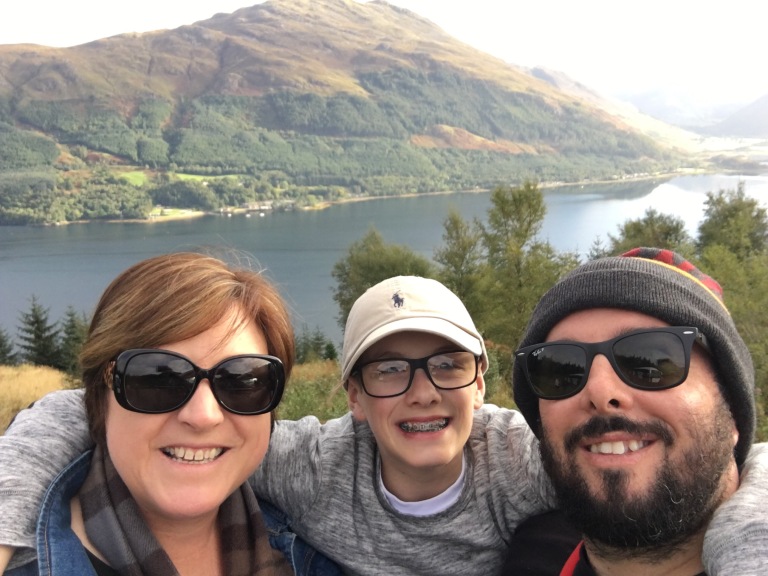 Highland scenery and lochs and glens. When you think of the highlands and Scotland these are the images that come to mind. Rolling green hills, deep glens with babbling brooks, heather and ferny glades. Again it was reminiscent of Iceland in its drama and blackulousness! I just could not get enough of the view and the photos do not do it justice because they are taken from the bus and have reflections in them. Here is a selection. I did go a bit overboard because there was always another breathtaking view around every corner. 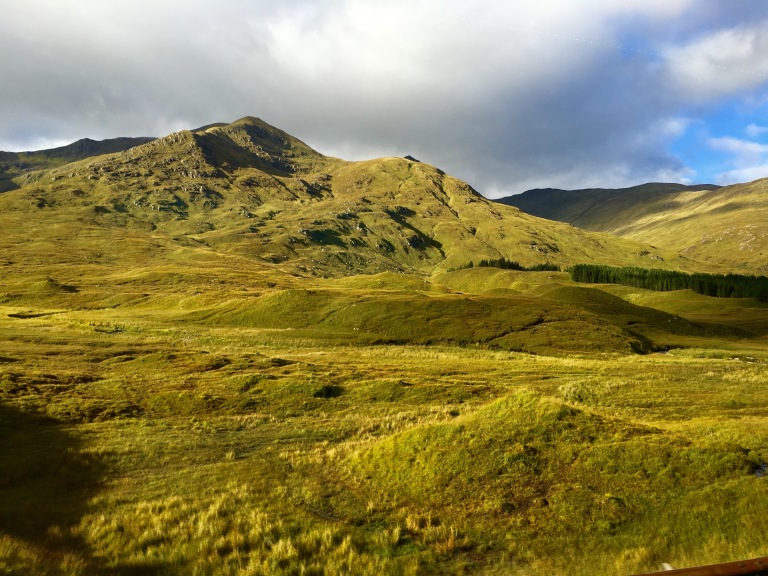 As we came to Glengarry things got misty and that just added to the beauty! It was so beautiful with spiderwebs on the fernery and shrubbery.

We crossed the Caledonian canal and drove along stunning lochs to The Speed Bridge WW2 memorial to the Royal Marine Commandos and memorial garden with partial views of the top of Ben Nevis. The memorial garden was  very moving as it was personal with photos and mementos to the fallen including commandos that lost their lives more recently in Afghanistan. 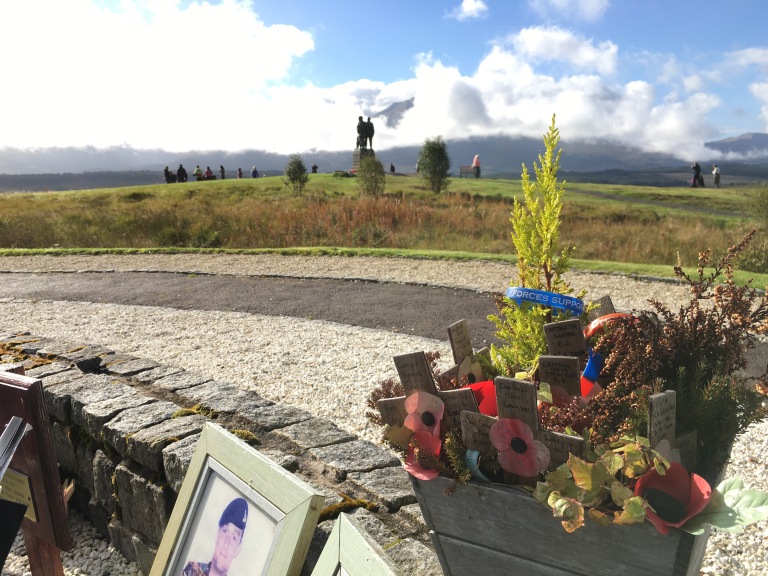 Lunch at Fort William which is where Outlander fans will remember Jamie was a prisoner a number of times. Lunch stop was just a big cafeteria and shop for souvenirs. I did manage to find Jamie Fraser though, and his young son. 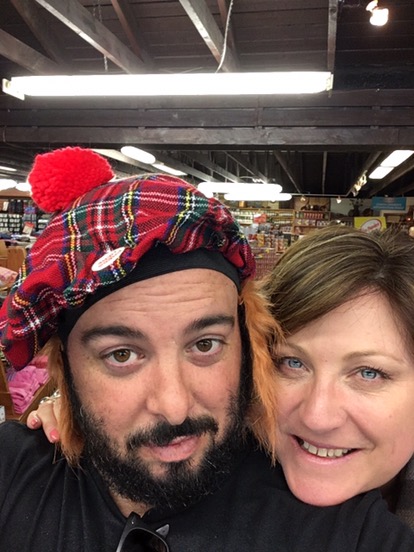 In 1691 King William offered a pardon to the clans if they took an oath of alliegiance by December 31.All signed except for the MacDonald’s so on 28 December they came up to sign but magistrate was not there. So they marched to Edinburgh before the deadline and signed but King William was informed that they had not. King William ordered the clan of the Campbell’s to kill the MacDonald’s.

Highland hospitality is quite  renowned. Even when fighting if a clan came into another clan they clothed you, shoed you and fed you meat (meat and mead inspiration for Game of Thrones) and feasted for days.

On 13 feb 1692 the Campbells came under the hospitality of the MacDonalds and after being fed and feasting together the Campbell’s massacred them while they slept. It is estimated 200-800 people were murdered. Those fleeing also perished in the weather (mostly women and children). The Campbell’s accepted their hospitality then fell upon them. This notorious event is still pretty raw between the two clans. They do not speak at all and attempts to get them together in the Millenium resulted in a handshake but nothing else. 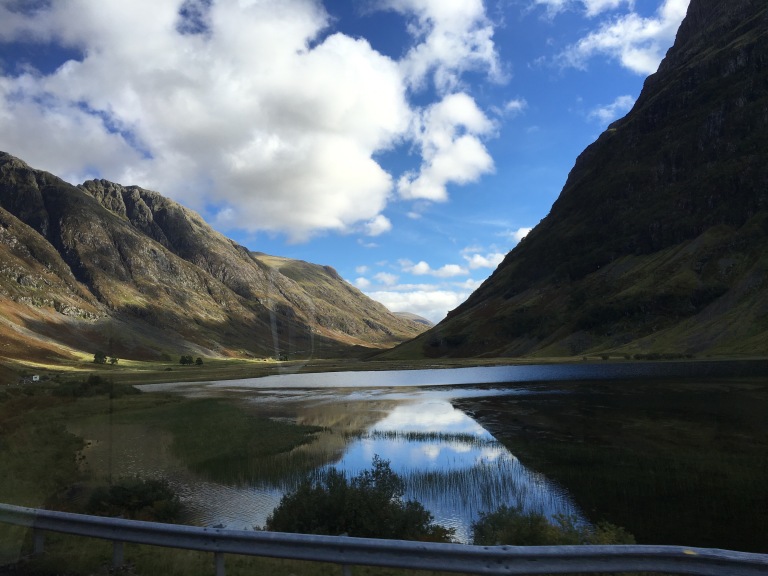 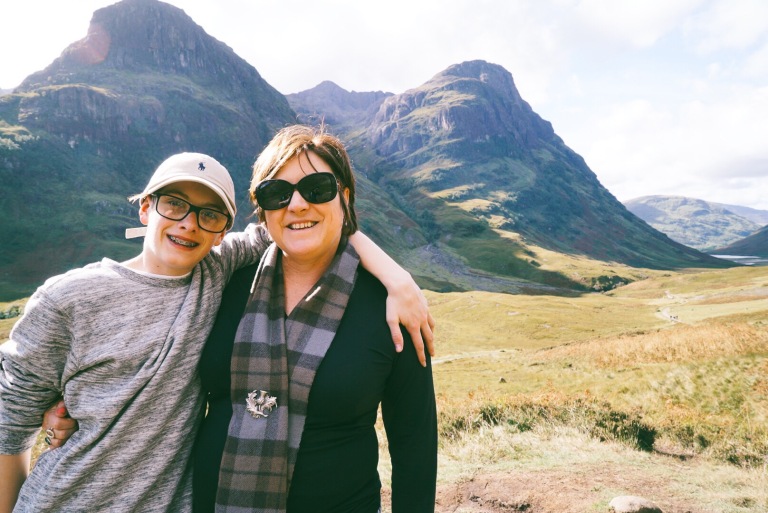 From the dramatic glens to a sudden change in landscape to the beauty of Rannock Moor. 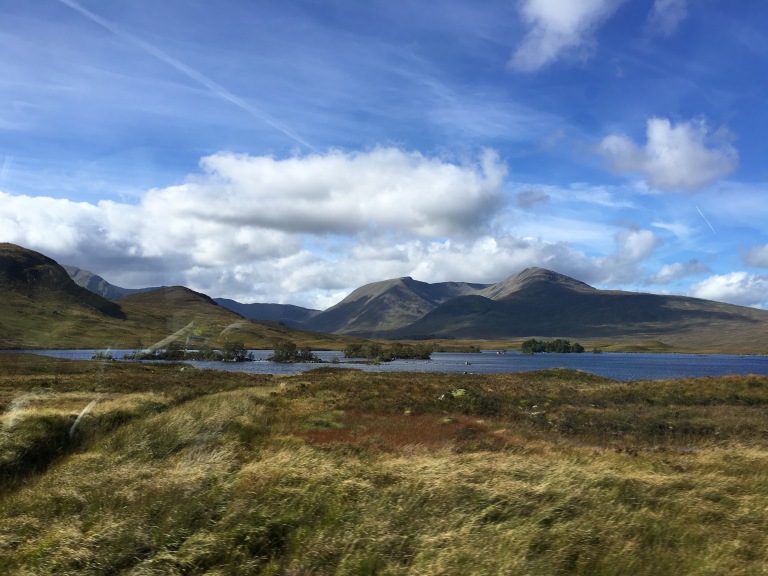 And I’ll be in Scotland afore ye,

But me and my true love will never meet again,

There are many theories about the meaning of the song and most are connected to the Jacobite Uprising of 1745. One interpretation based on the lyrics is that the song is sung by the lover of a captured Jacobite rebel set to be executed in London following a show trial. The heads of the executed rebels were then set upon pikes and exhibited in all of the towns between London and Edinburgh in a procession along the “high road” (the most important road), while the relatives of the rebels walked back along the “low road” (the ordinary road travelled by peasants and commoners). The other interpretations also have to do with Scottish soldiers doomed to die lamenting their days in the sun with their lovers on the banks of Loch Lomond. The song is sung boisterously at Scottish gatherings but when you know the meaning it’s very sad and incredibly moving.

A colleague of mine shared with me how her grandmother taught her the song as a tribute to her grandfather who was from Scotland. Two weeks after he retired he went back to his home town of Greenock and passed away while he was there and his family never saw him again. Her grandmother taught her many songs in his memory and this one always made her tear up. Thank you Andrea for sharing your memories of your grandmother and this song. It has made it more poignant and meaningful to me as well. 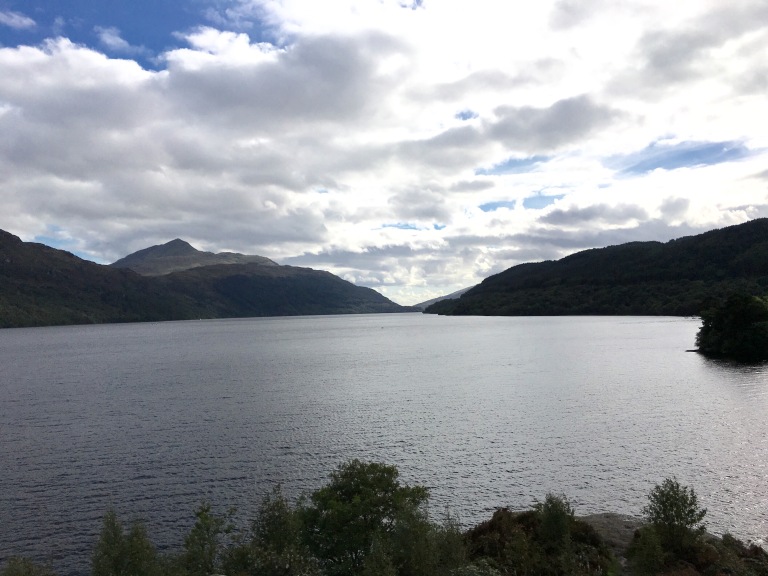 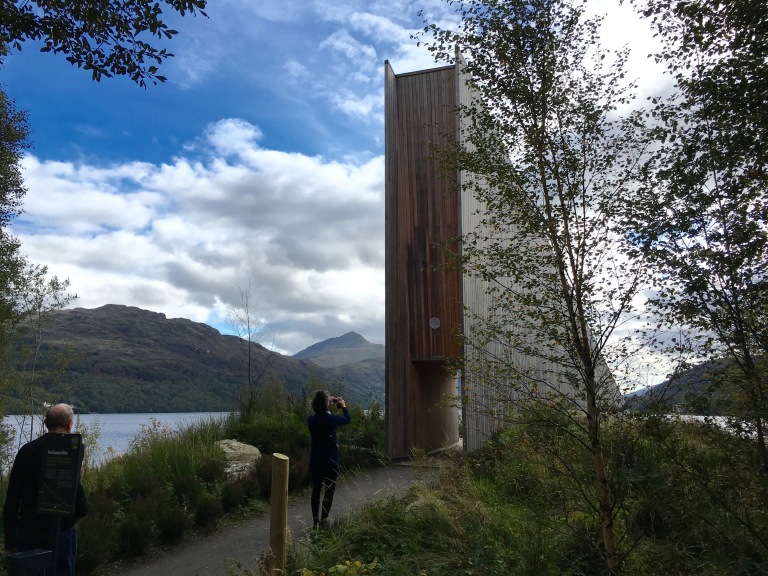 From the highlands to the lowlands and a drive into the big city of Glasgow. Glasgow was heavily bombed in  WW2 but there are still plenty of historic buildings. We visited the High Kirk (Cathedral) of St Mungo’s. It had some beautiful stained glass and tombs. 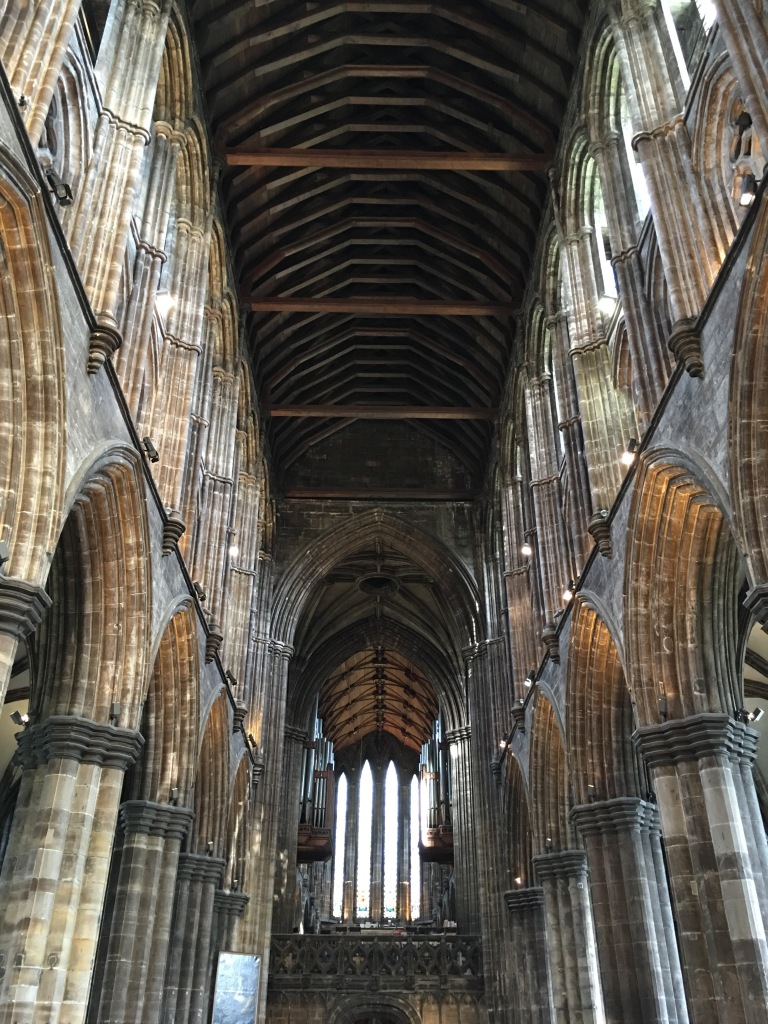 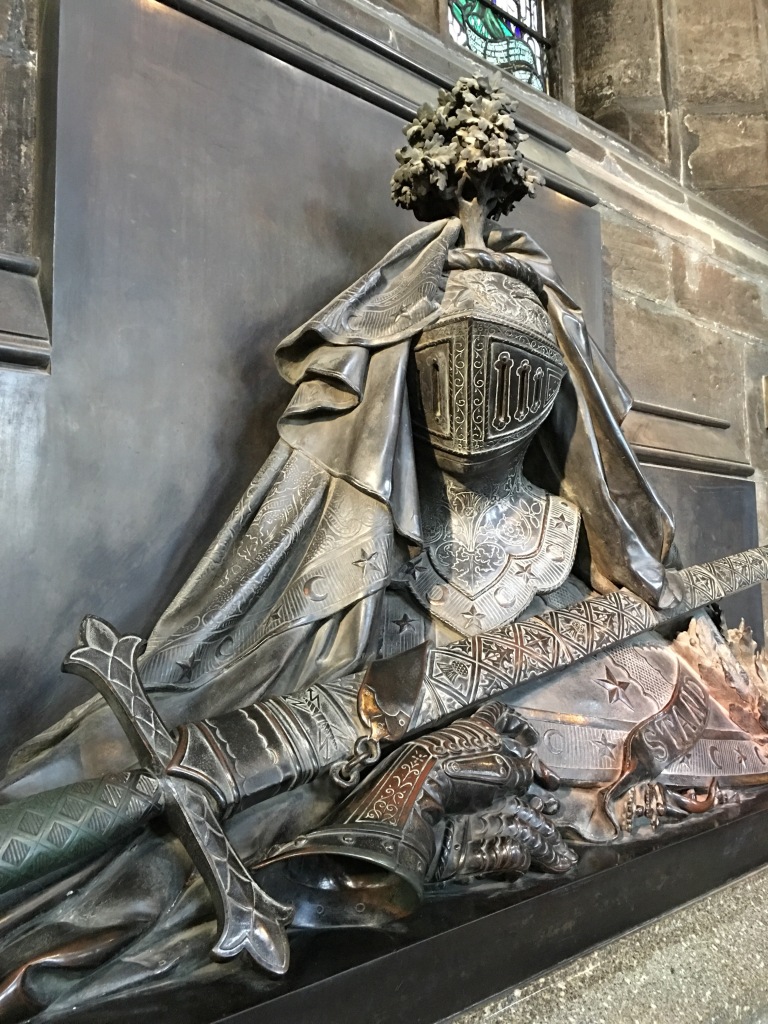 We had a brief stop in George Square to look around and One way to see Glasgow in 40 mins  is with a kid who wants Maccas! We practically ran from one side of the CBD to the other. Stopping briefly to take a snap of Wellington with the traffic cone on his head. It began with university students placing it there and police removing it every day until eventually the yen races it or gave up and left it there. They eve painted a gold one for the Commnwealth Games.

Staying at the Marriot and have double beds again! I bought some special whiskey and had a wee dram in our room before heading out.

Walked to dinner in Argyle St and ended up in  place called Fanny Trollopes which was rather quaint and delicious. 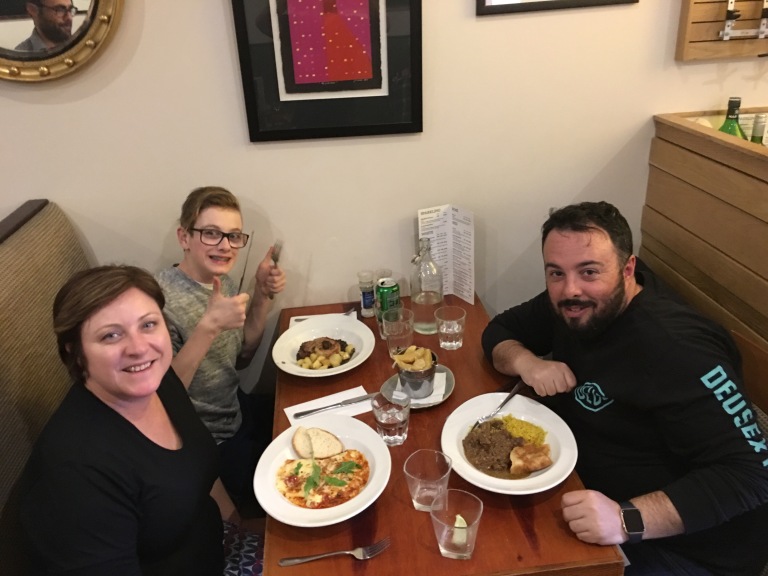 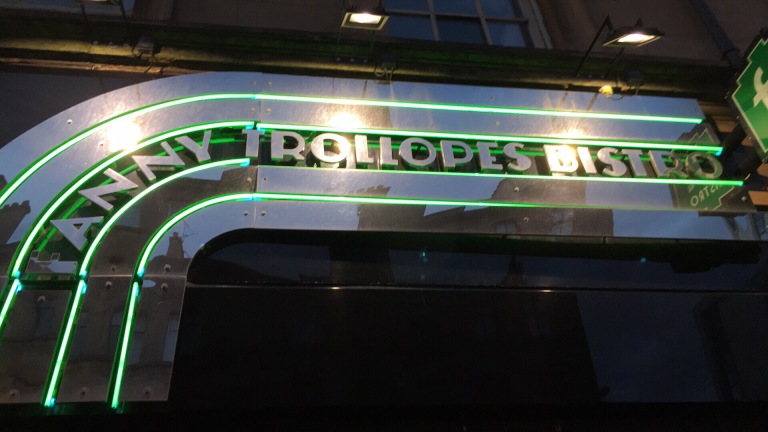 The waiter’s name was Harry and he has a part in a production of Priscilla Queen of the Desert next week. He was stuck on one particular line ( “Calm down you lot or I’ll turn ugly”) so he recorded me saying it so he could practice!
We had arranged to meet my friend Claire who used to live in Melbourne, at 8pm and she arrived just in time for desert. It was a lovely catch up talking about old times, old friends and our new lives.

Tomorrow we leave Bonnie Scotland and head to Northern Ireland.

One thought on ““Oh, cruel was the snow that sweeps Glen Coe And covers the grave o’ Donald””