Farewelled Frida and our lovely little beach house and we were on the road again with Juan, heading to the airport.

Getting our Cuban tourist visitor at the airport. There was some trepidation about this as Paula had paid $150 for hers in Australia through the travel agent. Josh trusted his Reddit research that assured him you can buy them cheap at the airport. I was nervous but he was correct. I guess travel agents need to make their money somehow now that everyone books stuff on their own. 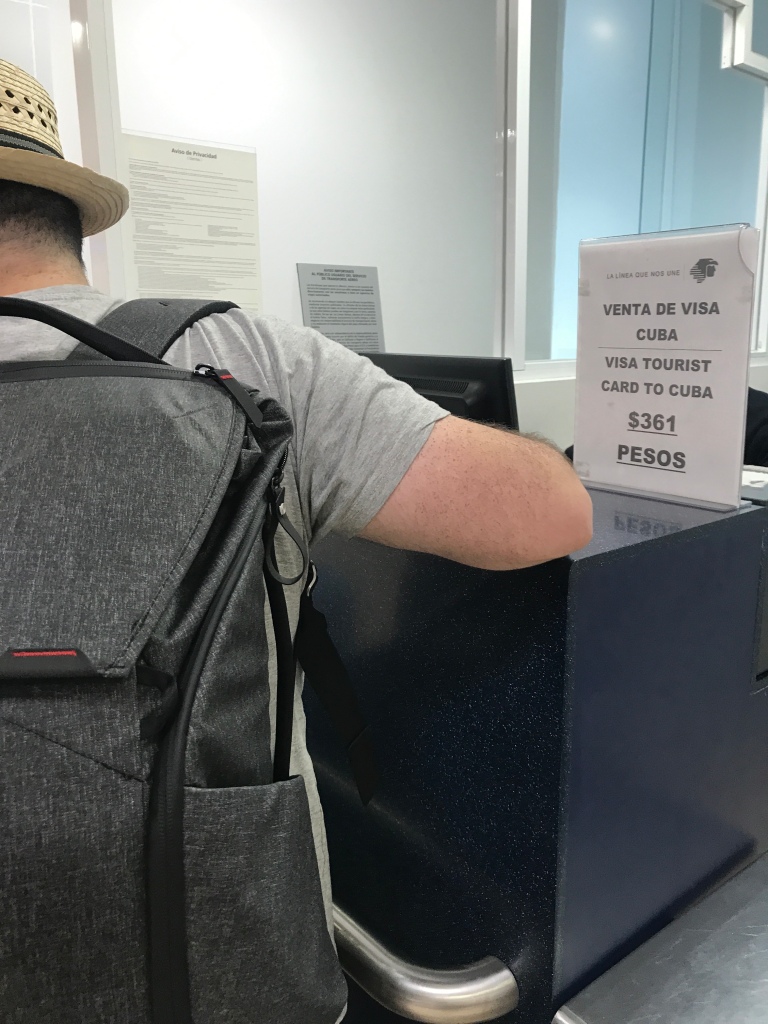 The flight was 45 minutes long. Thank goodness as we were seated behind an extremely annoying kid who was only disciplined by his parents when josh pointed it out! He is also the reason sanitize where I sit on a plane. He was constantly picking his nose then turning the light off and on 😩

The first thing I noticed was the way the airport security and customs wore their uniforms – the women wore short, tight skirts and lace stockings or bare legs with Midi heels. It was like some sort of sexy security guard Halloween costume.

There were also tables of doctors and nurses with old school little white caps checking for signs of ill health as passengers walked past.

We had to go through bag checks again and my little carry on of tightly rolled and bagged Camilla dresses were stopped to be opened after being flagged on the X-ray. The sparkles on the dresses caused some confusion!

Josh changed money while I waited and observed. The airport is so tiny!

We had written the address of our Airbnb on paper to give to the cab driver who may decide to take us somewhere else for a commission.

Our Airbnb is a guest house with central areas like the kitchen and rooftop which is lovely and had a nice breeze. Honour system on the fridge and bar for drinks.

Room is tiny with loft bed (cut foam mattress with sheet only) will be hard after all the human size pillows we had in Tulum!
Aircon is struggling and no doubt I will too as I don’t do well in heat and humidity if I can’t get cool.

First impressions: I really felt like a spoiled brat and wanted to check into a hotel, preferably with a pool. 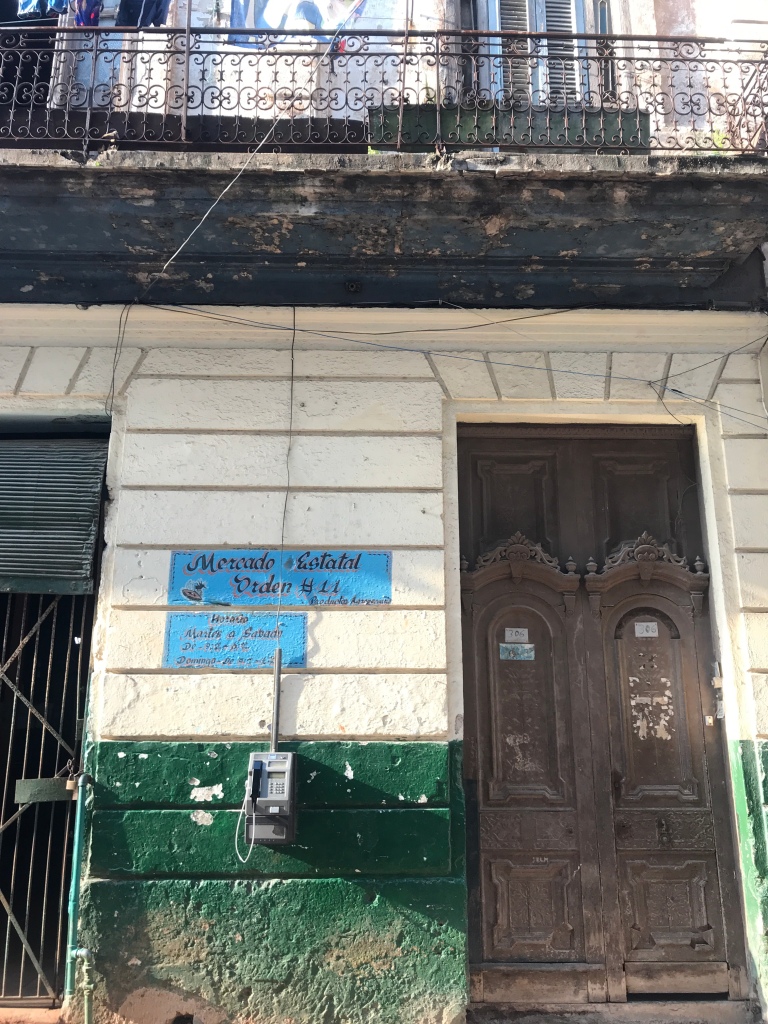 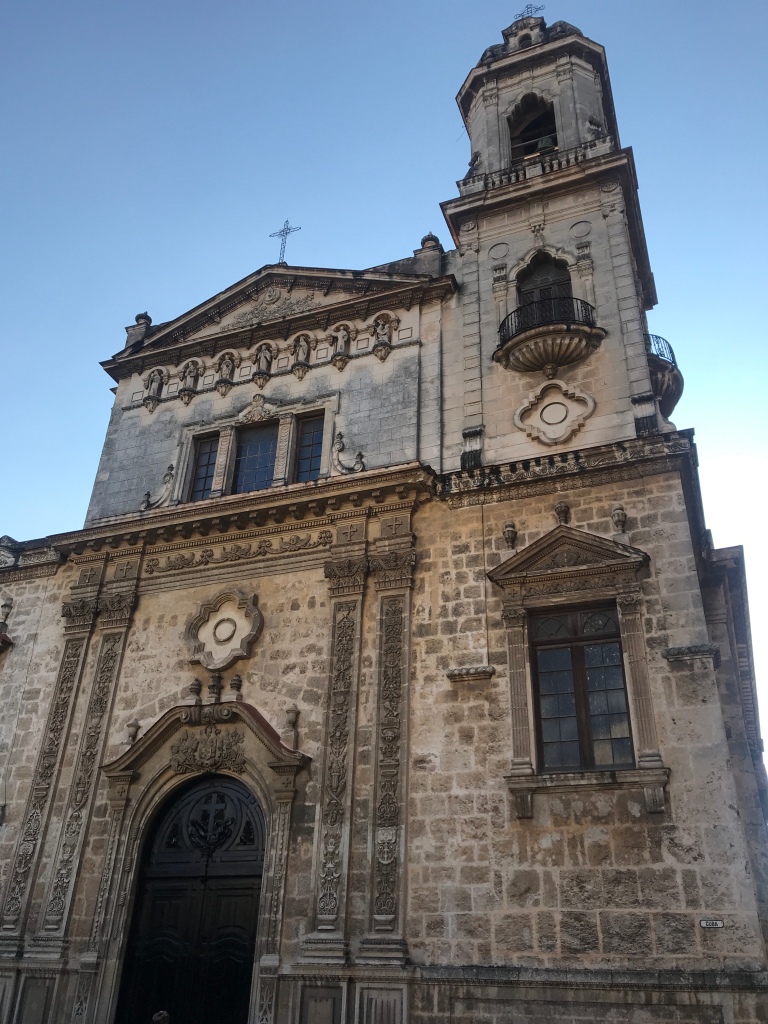 So we headed out towards the Malecon ( the famed sea wall).

We are staying in Old Havana – Havana Viera. The walk was along a street filled with local homes and businesses. On one corner we ran into a group of people watching some women shouting and fighting in the streets. To be honest it sounded like the year 9 courtyard at school!

Suddenly the street scape changed and we were surrounded by leafy trees and there were less locals and more tourists.

Church of St Francis of Assisi

We headed towards The sea breeze and came across a Cruise ship on the water. We thought we were at the sea wall but it was smelly and dirty. So we crossed back towards official looking buildings and wide piazzas with dogs that had labels on them announcing their names and asking us not to treat them badly. 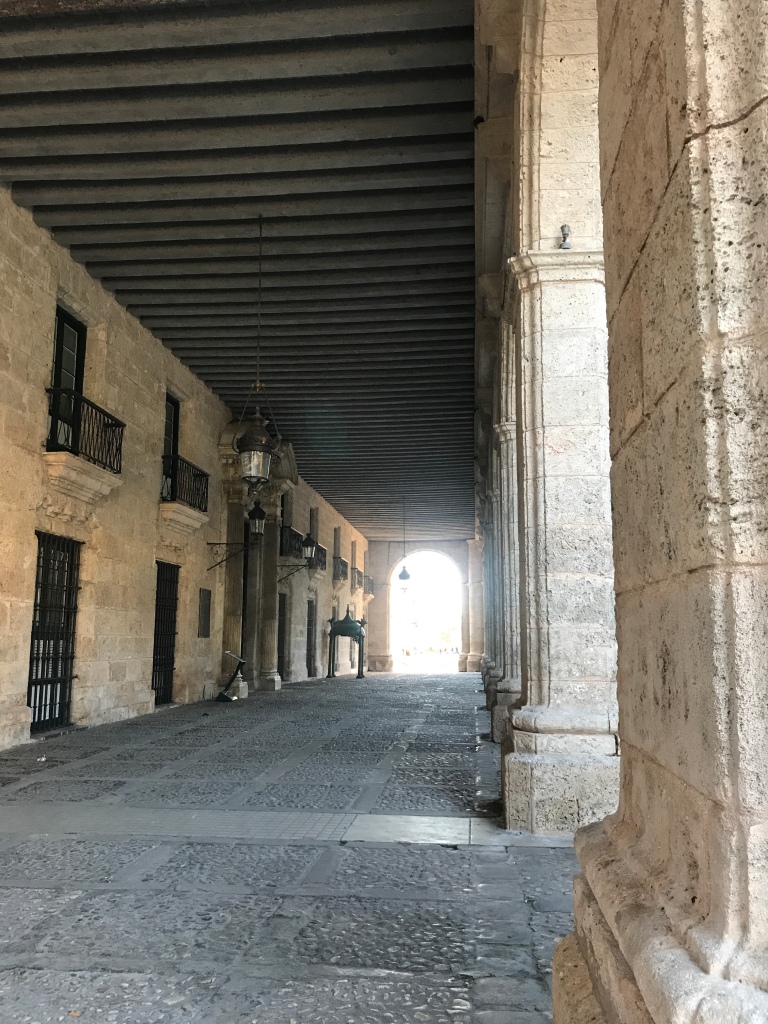 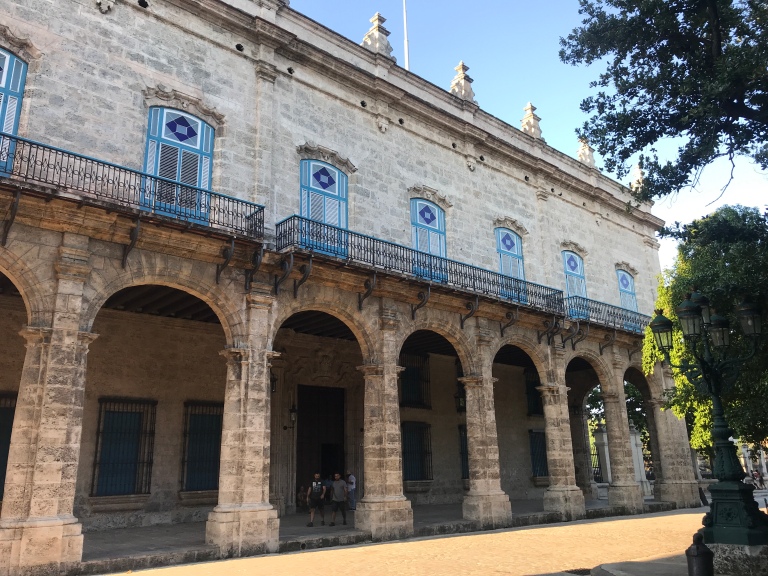 The Cathedral of San Cristóbal 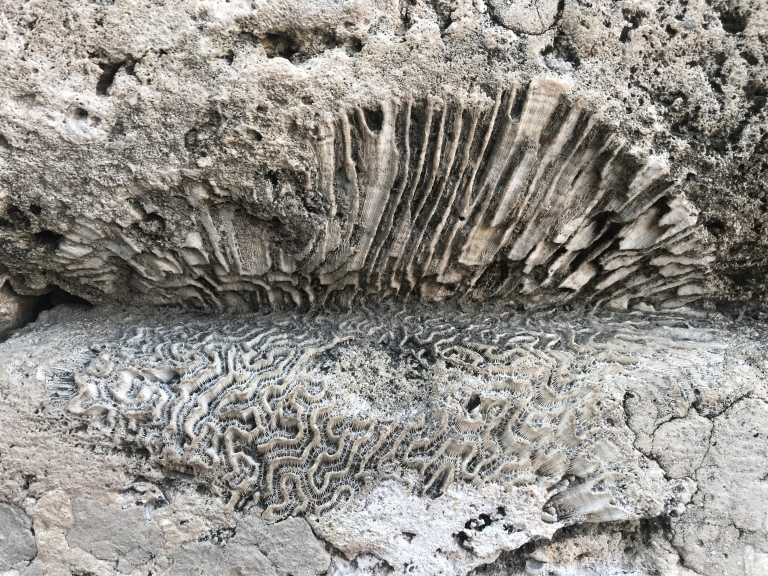 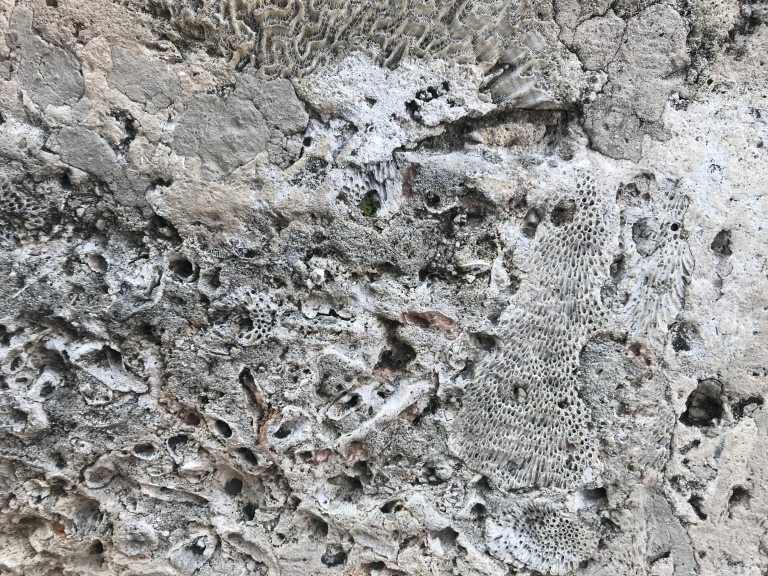 If you look closely at the bricks there are impressions of sea life.

With no internet I used my Lonely Planet city guide to find somewhere to eat. On the way we were solicited by so many others trying to take us to this or that restaurant. These men ran when police came into sight.

We had a delicious and simple meal and very strong drinks! 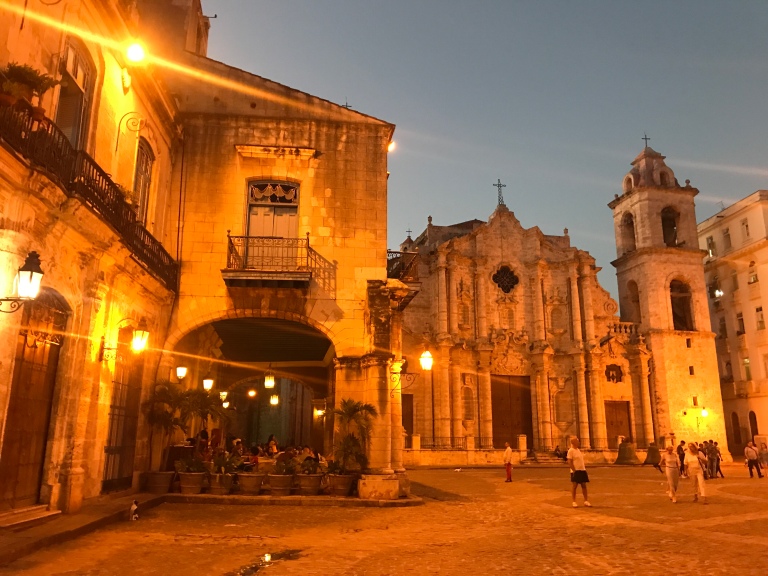 On our walk home we were not exactly scammed but certainly played and knew it the whole time but didn’t really know how to politely extricate ourselves from the situation and ended up having a drink (because we had already eaten) and buying dinner for our friend Eduardo who most certainly earned himself some CUC after we were gone. 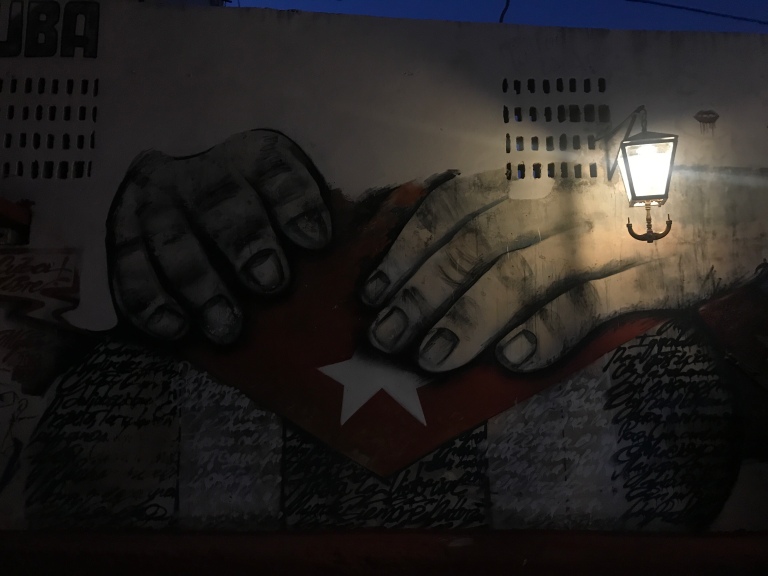 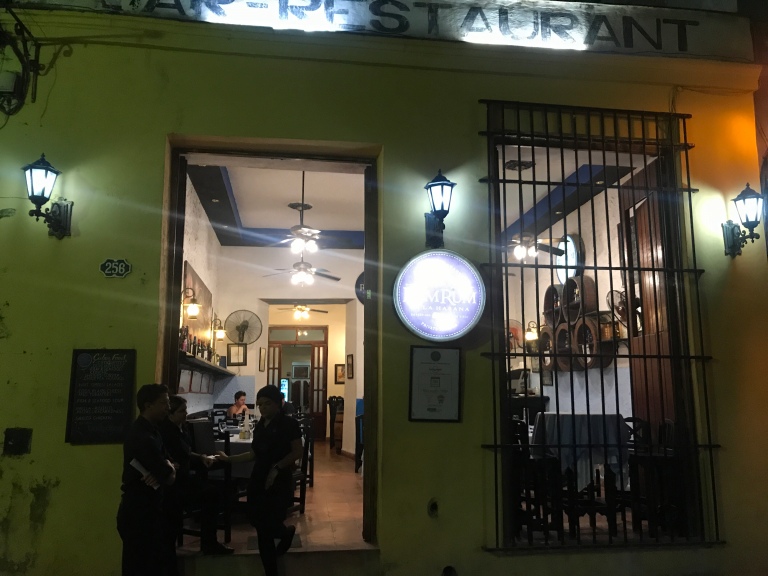 We walked home feeling conned and not at all in love with Havana. In fact we felt very uneasy.

I practically jumped in the shower and was even happy to do so at the same time as josh was in the loo. Very intimate!

Our Airbnb host was not around so after a brief cool down on the roof, we headed to bed, not very enthused about the rest of our stay.