Thank goodness I woke at 4:30 because repacking is a nightmare and we had an early start.

Our first stop was the monastery of Clonmacnoise founded in the 6th century by St Ciaran (who died of yellow plague 7 months later). He never got to see it become a power house of theological thought.

This sixth century monastic site, located on the banks of the River Shannon is home to three high crosses, a cathedral, seven churches and two round towers. This great monastery was founded in 548- 9 by St. Ciarán Mac a tSaor (“son of the carpenter”), who studied under St. Finian at the famous Clonard Abbey. The strategic location of the monastery at a crossroads between the major east-west land route through the bogs of central Ireland and the River Shannon helped it become a major centre of religion, learning, craftsmanship and trade by the 9th century.

Clonmacnoise was a centre of learning excellence, and many manuscripts, including the including the Annals of Tighernach (11th century) and the Book of the Dun Cow (12th century), were written here. The monastery flourished for 600 years as a centre of learning and religious instruction as well as providing much of Ireland’s finest Celtic art and illuminated manuscripts. 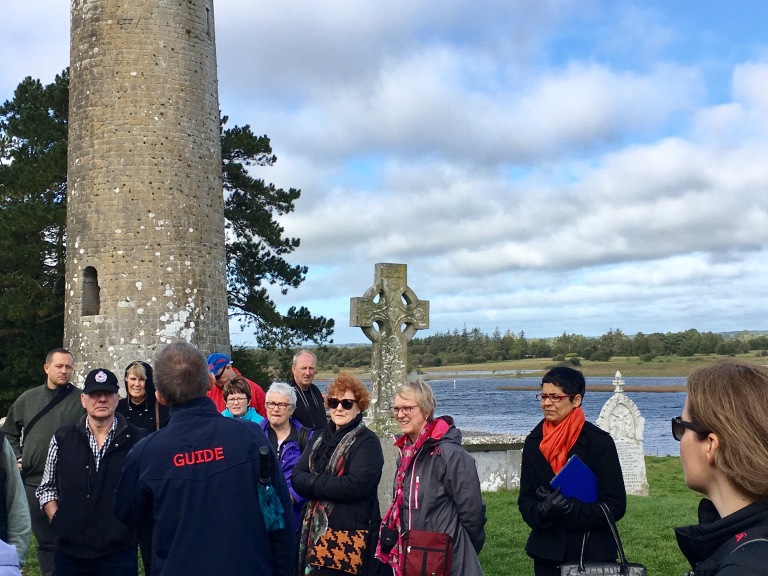 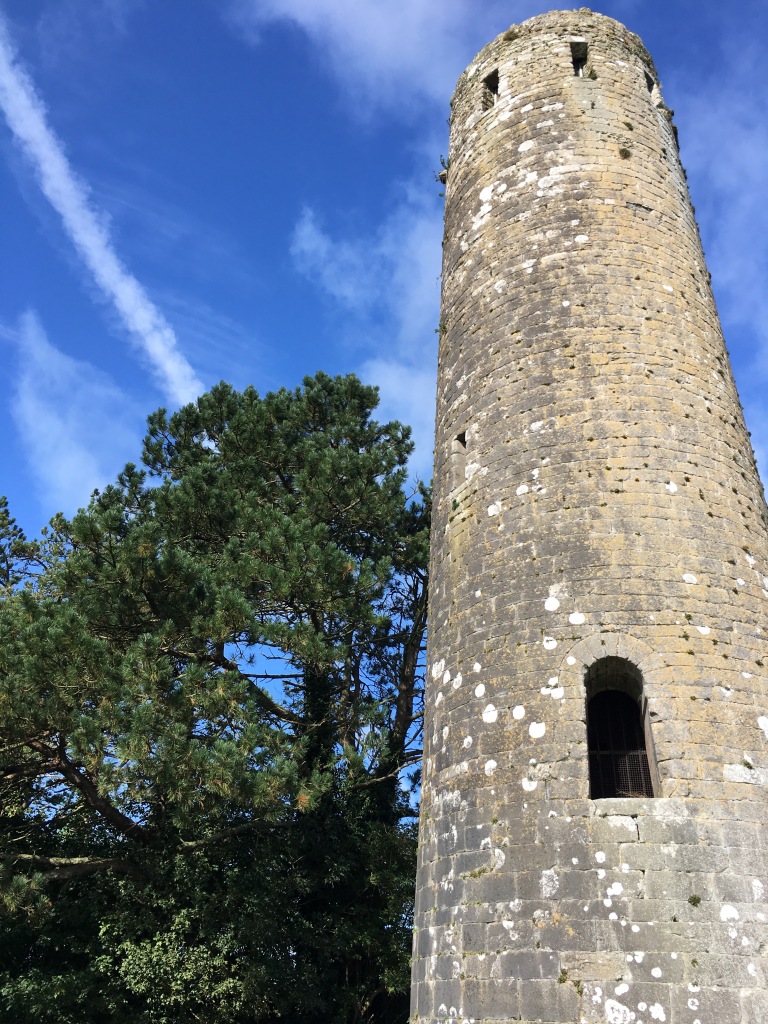 Alongside the ruined churches and round towers are three ancient high crosses; two are complete high crosses plus the shaft of another. Now protected from the Irish weather in the visitor centre, convincing replicas stand in their original locations. The most famous is the four-meter Cross of the Scriptures, whose sandstone is skillfully carved with intricate figures on all four sides. The Cross of the Scriptures was mentioned twice in the annals of the Four Masters, first in 957 and later in 1060. At the centre of the head on East face is the Last Judgement, and at the top of the East shaft is a panel showing Christ with Peter and Paul. Below this panel are two more panels bearing iconography that is still open to interpretation. On the base are three riders facing left and two chariots facing right. At the bottom of the shaft is an inscription that has now become almost impossible to see: Or do Colman Dorrro……Crossa ar Rig Flnd, A prayer for Colman who had the cross erected on King Flann. 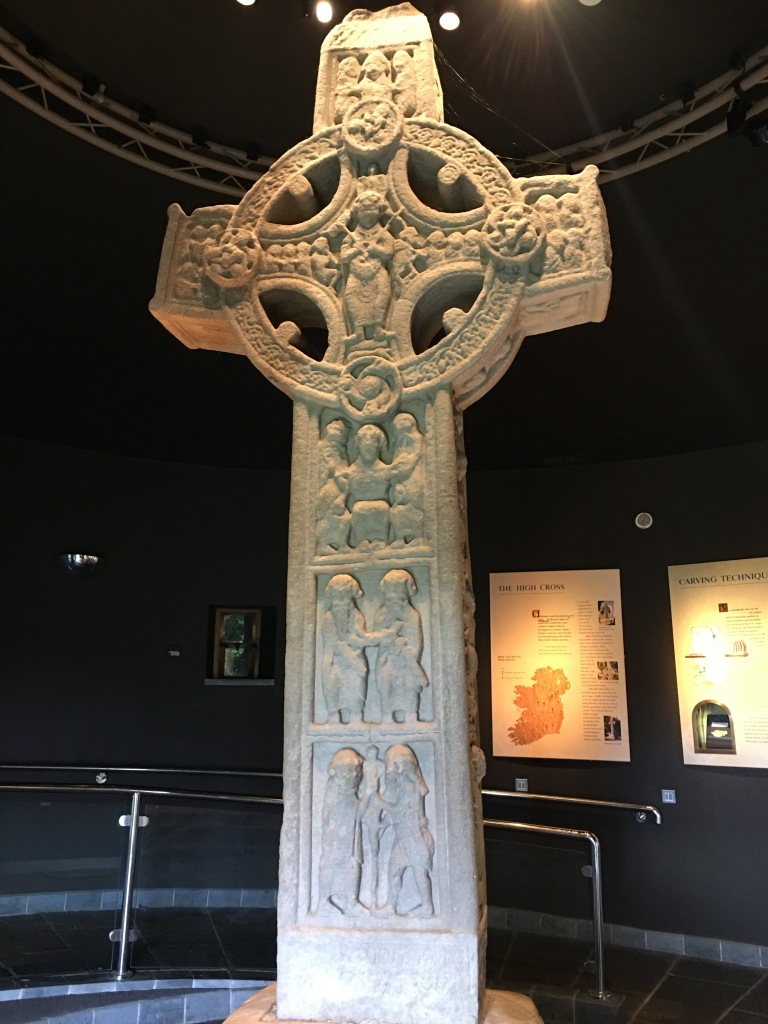 Read more about the monastery and its buildings Here 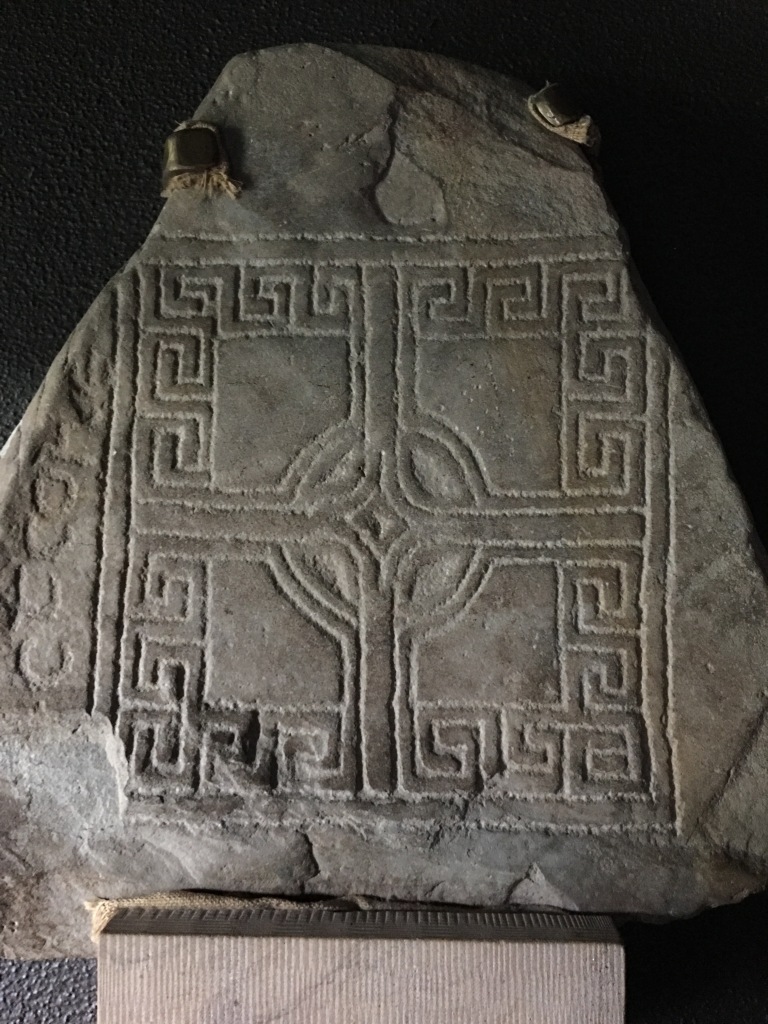 The Nun’s Church is one of Irelands hidden gems. Located 300 metres east of the main complex at Clonmacnoise, it ranks amongst the finest examples of Hiberno-Romanesque architecture in Ireland. We followed the pilgrim path down a lane and it was well worth the detour from the itinerary. 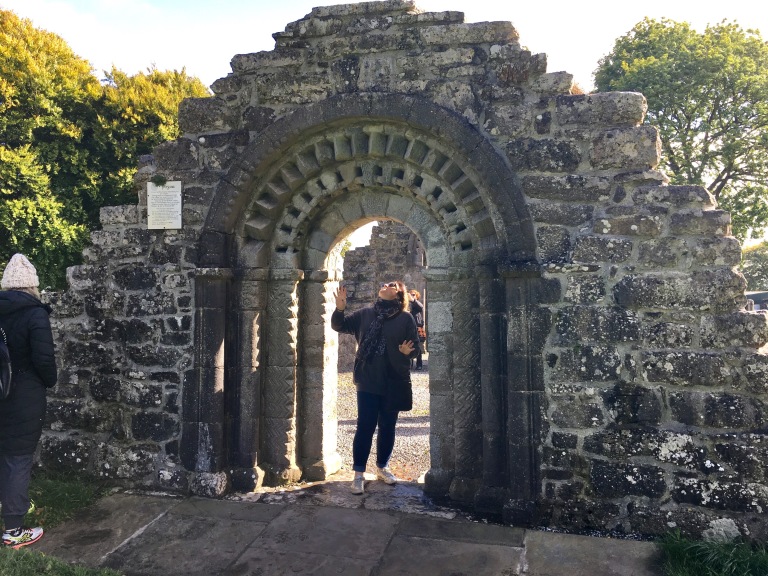 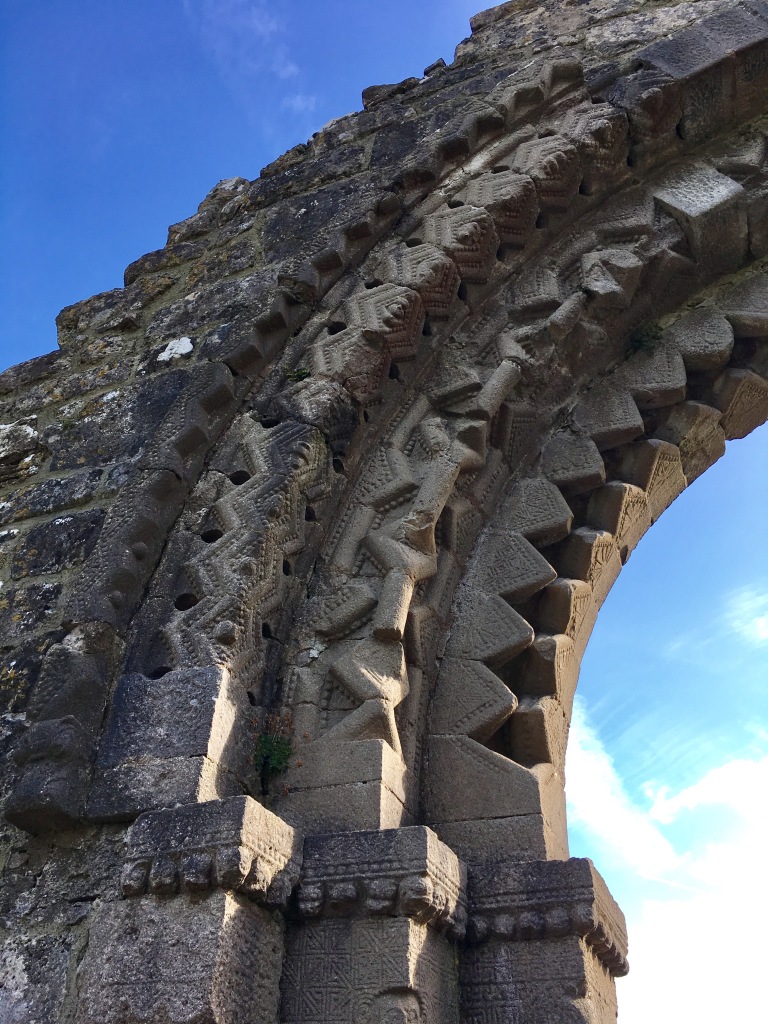 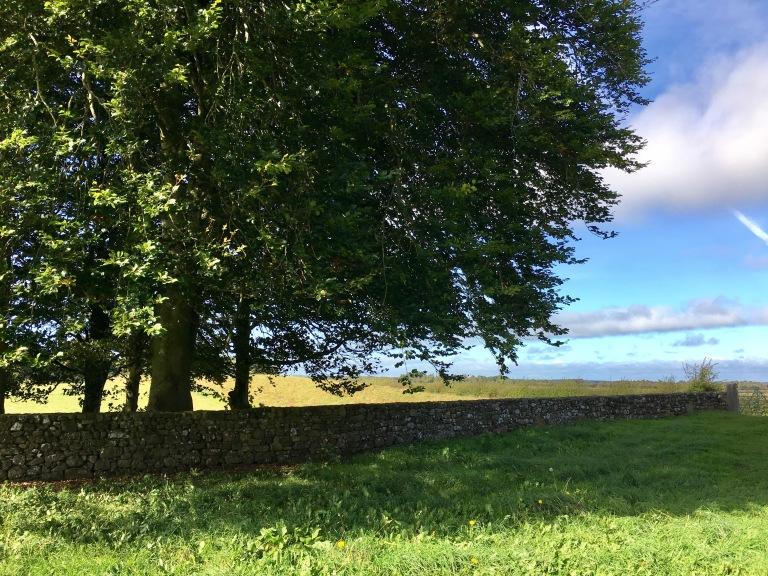 Brigit’s Garden takes you on a magical journey into the heart of Celtic heritage and mythology, making it one of the truly outstanding places to visit in the West of Ireland. The award-winning Celtic Gardens are widely regarded as one of the most spectacular in Ireland, set within 11 acres of native woodland & wildflower meadows. In addition to the Celtic Gardens visitors can enjoy the nature trail, an ancient ring fort (fairy fort), thatched roundhouse and crannog, and the calendar sundial, the largest in Ireland. 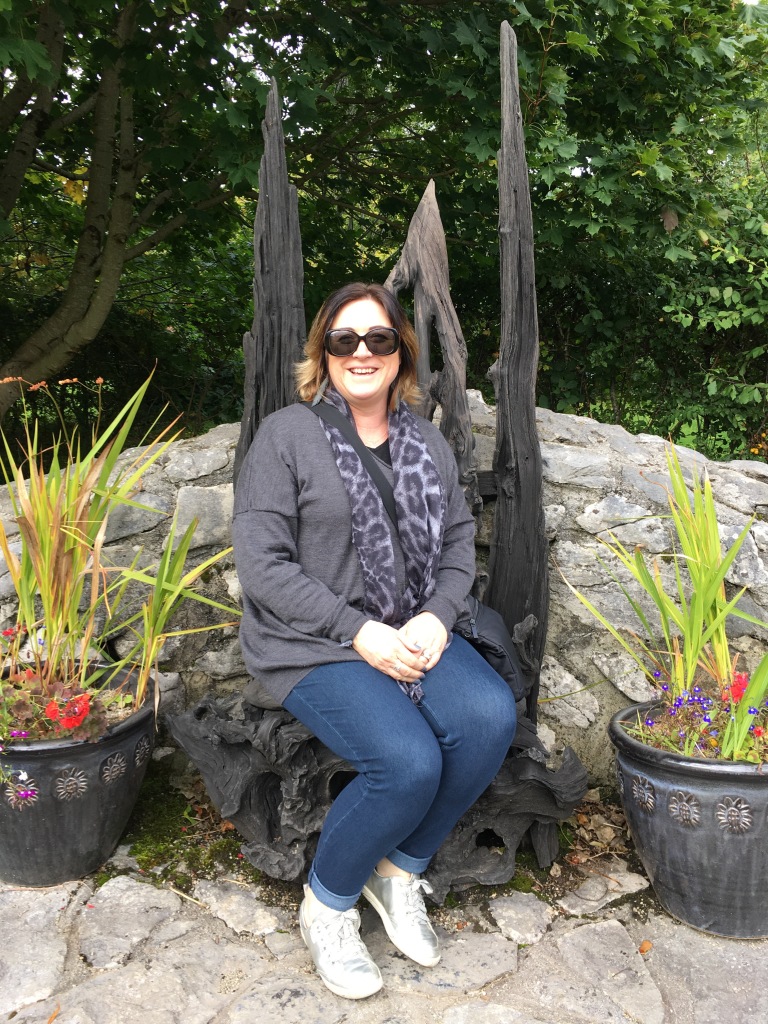 A definite highlight was The Three Faces of Brigit paving which represents the three stages of women – maiden, mother and crone. Crone did not have the negative connotations it does today and needs to be reclaimed – it is supposed to be the stage where a woman comes into wisdom. The paving does not photograph very well but this sign will give you some idea: 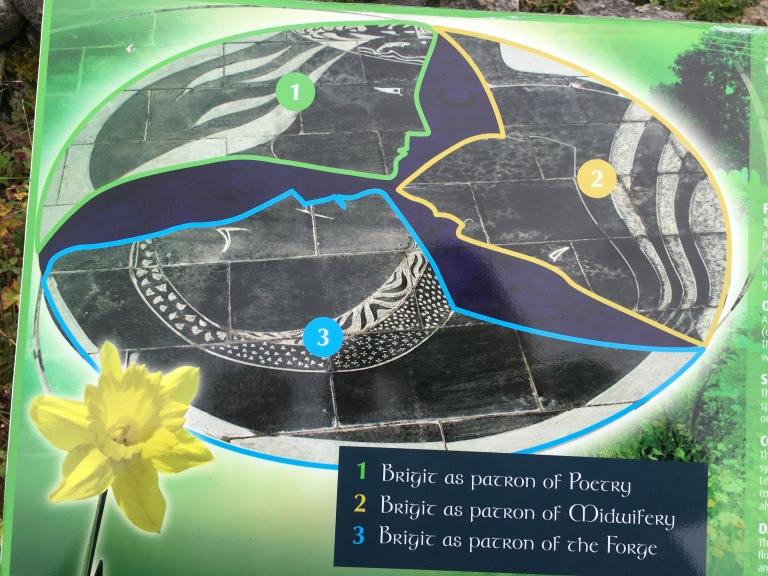 The 6th Century abbess of Kildare and the Celtic Goddess Brigid are very closely linked and share many of the same symbols and stories. Nine of these symbols can be seen around the perimeter of the paving.

Fire – the nuns at Brigid’s monastery at Kildare are said to have tended a sacred fire that burned from pre- Christian times.

Oaktree – a central symbol for brigid from which Kildare (cill Dara – the church of Oak) takes its name.

Snowdrop – is one of the first signs of spring coming into bloom on 1st February, St Brigid’s Feast Day.

Cow – st Brigid had a cow that could be milked three times everyday and always have what was needed.

Dandelion- the serrated flower of Brigid. In flower it symbolizes the sun and its seed head, the moon.

Sword – the celts were highly skilled in metal work and weapon making. Brigid was patron of the forge where fire and skill transforms raw materials into sacred objects. Brigid is said to have given her families jewel encrusted sword to a beggar that came calling when she was a girl.

Cloak – Brigid went to her bishop to ask for land to build her monastery and he told her she could have as much land as her cloak could cover. She spread her cloak on the ground and it miraculously covered 11 acres of Kildare.

Cross – traditionally made from rushes on the eve of St Brigid’s day and hung in the home for protection.the design dates. All to prehistoric times and is associated with the ancient sun goddess.

Bell – Brigid was patron of poetry and in her honour the chief poet carried a golden branch with tinkling bells. The bell is also the traditional call for prayer in a monastery.

After a wonderful walk around the Celtic Gardens we picked rushes and made Brigidine Crosses. Well everyone else did.  After 2 failed attempts I decided my gifts lay elsewhere.  I was particularly good at cutting the wool for the others to tie their cross arms off. 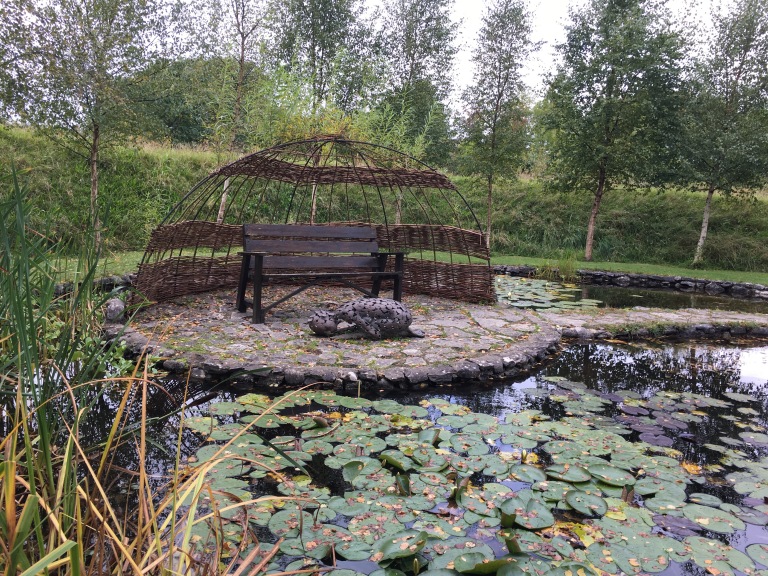 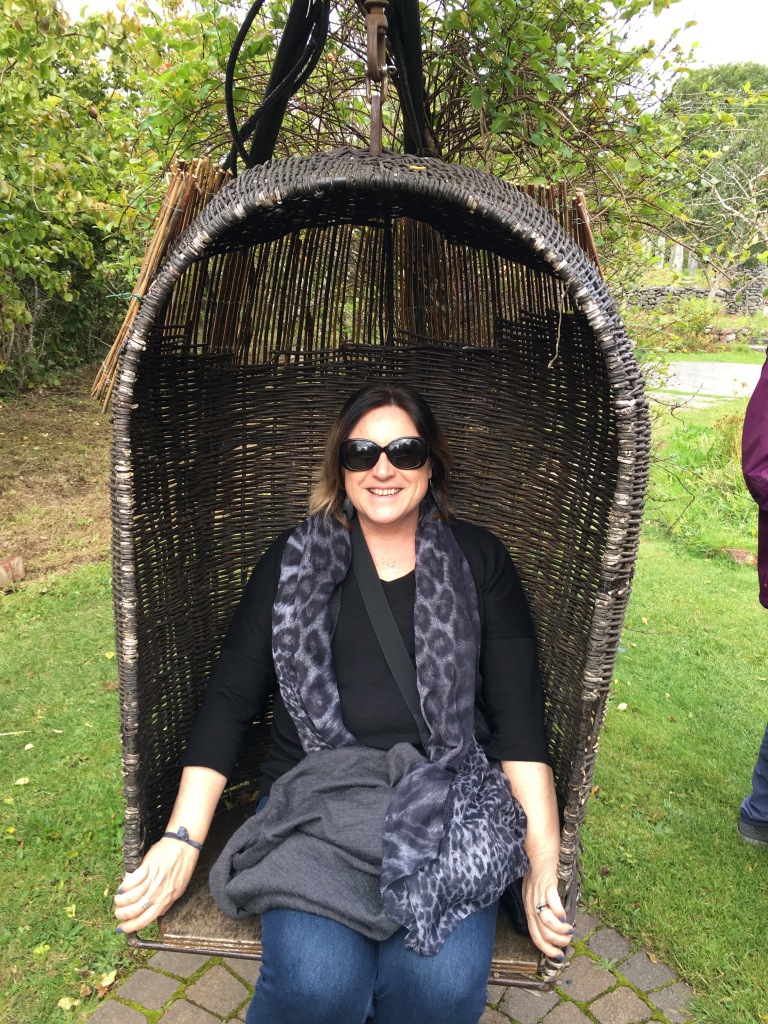 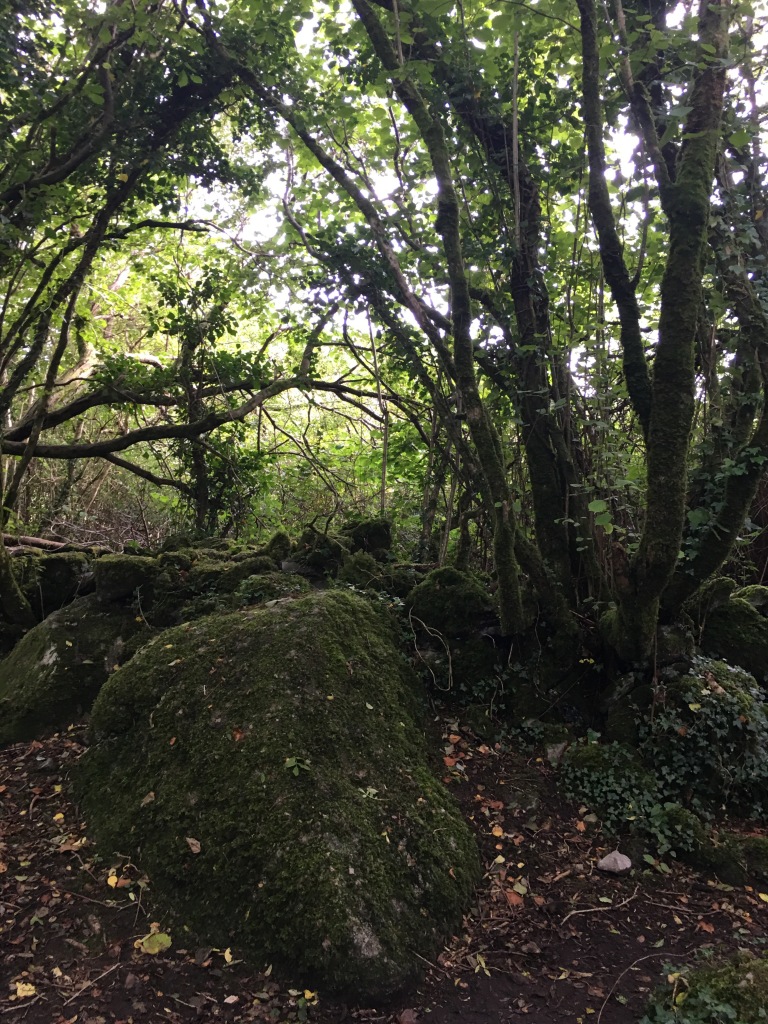 And now for the miraculous part of the day (besides surviving the bus driver doing 100km down narrow country lanes).

After we had made our crosses we prayed over them and our guide passed our Brigid Oracle cards. Now I’m not one to put much weight on those sorts of things but look at the card I drew:

I’m not awake yet, but I’m definitely yawning and stretching.

And the day ends with a gin and tonic I’ve renamed Brigid’s Well.

3 thoughts on ““Listen with the ear of your heart”.”