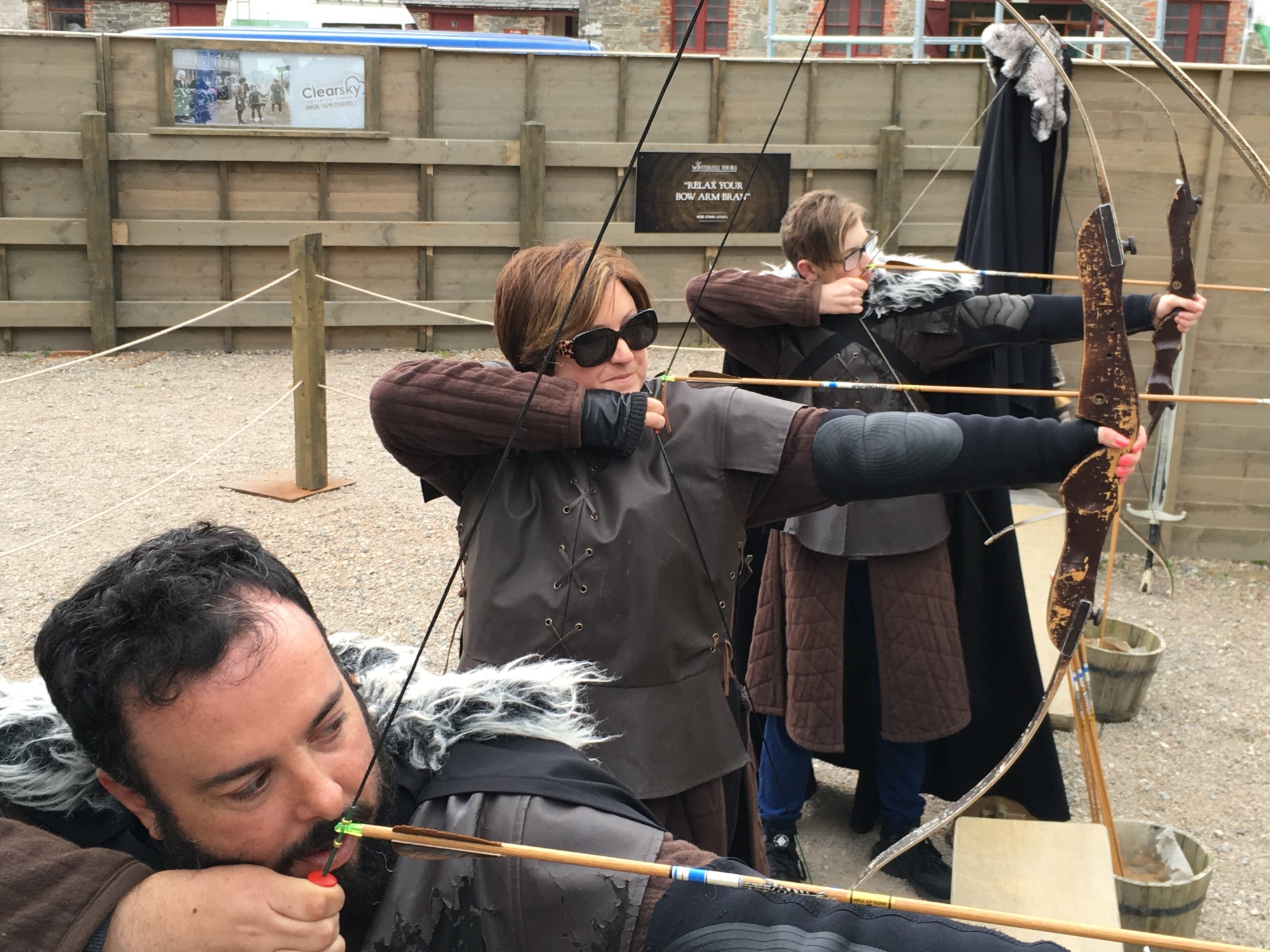 Josh’s Birthday  and we woke to a great view from our penthouse Airbnb . 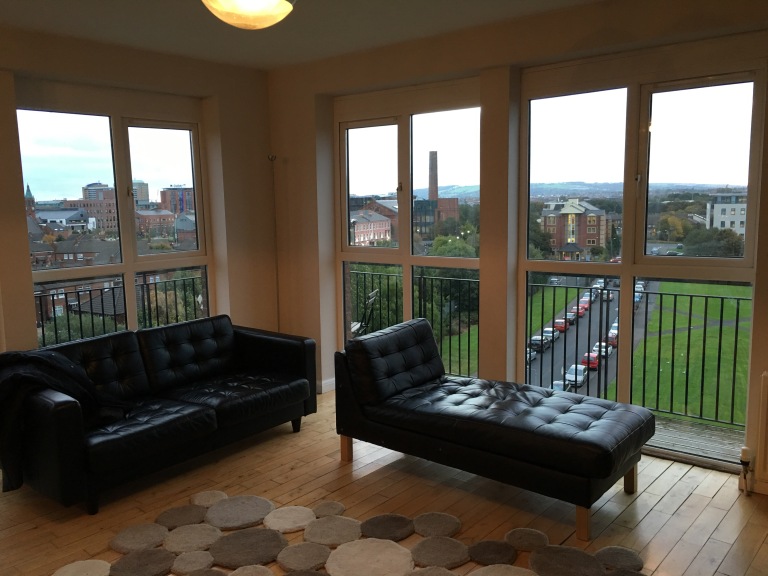 We set off for Castle Ward which was used for some exterior shots of Winterfell in the first few seasons of Game of Thrones. I had been so looking forward to this day but little sleep and a massive headache put a damper on the day.

Josh picked up our super cute but so tiny car and we headed for ‘The North’. 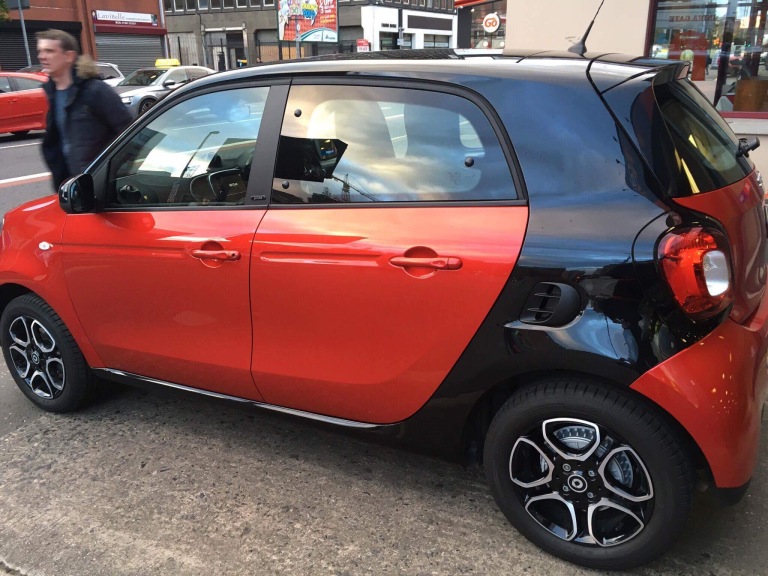 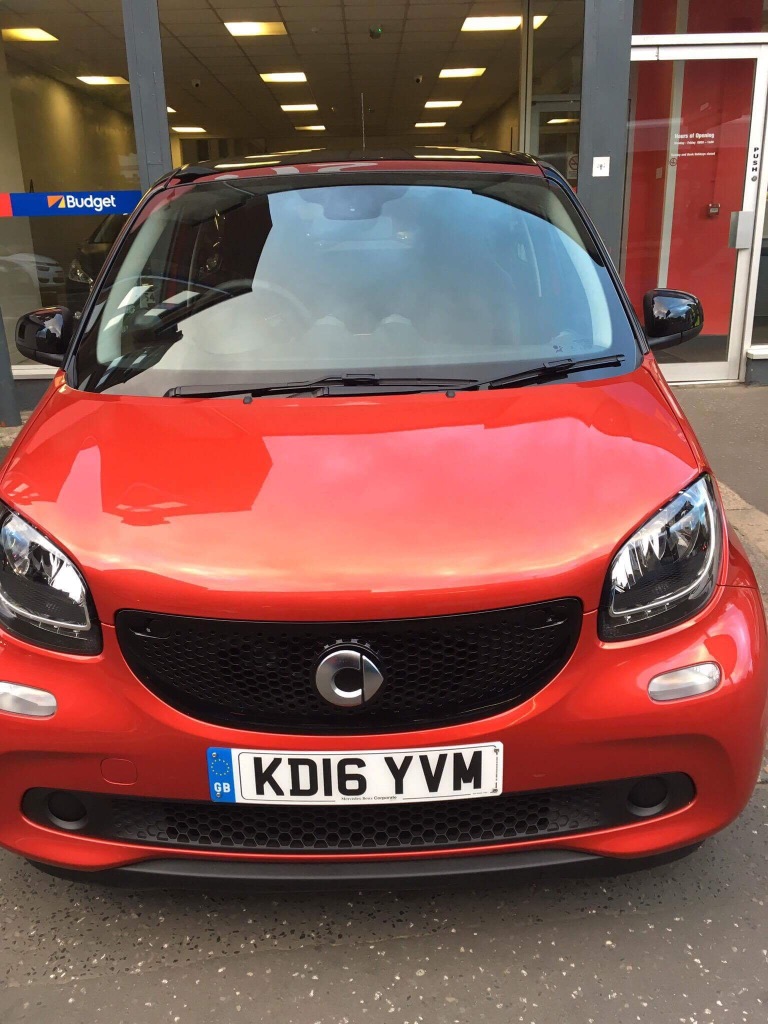 The castle is located about an hours drive from Belfast and is located amidst huge grounds that also have a Mansion house and an outdoor Centre.

First we went on a location scouting bike trail (yes I’m a glutton for punishment and my butt and thighs will not thank me).

This tower was used for the Twins (Walder Frey’s castle) along with plenty of CGI.

We are given cloaks and swords for photo opportunities. 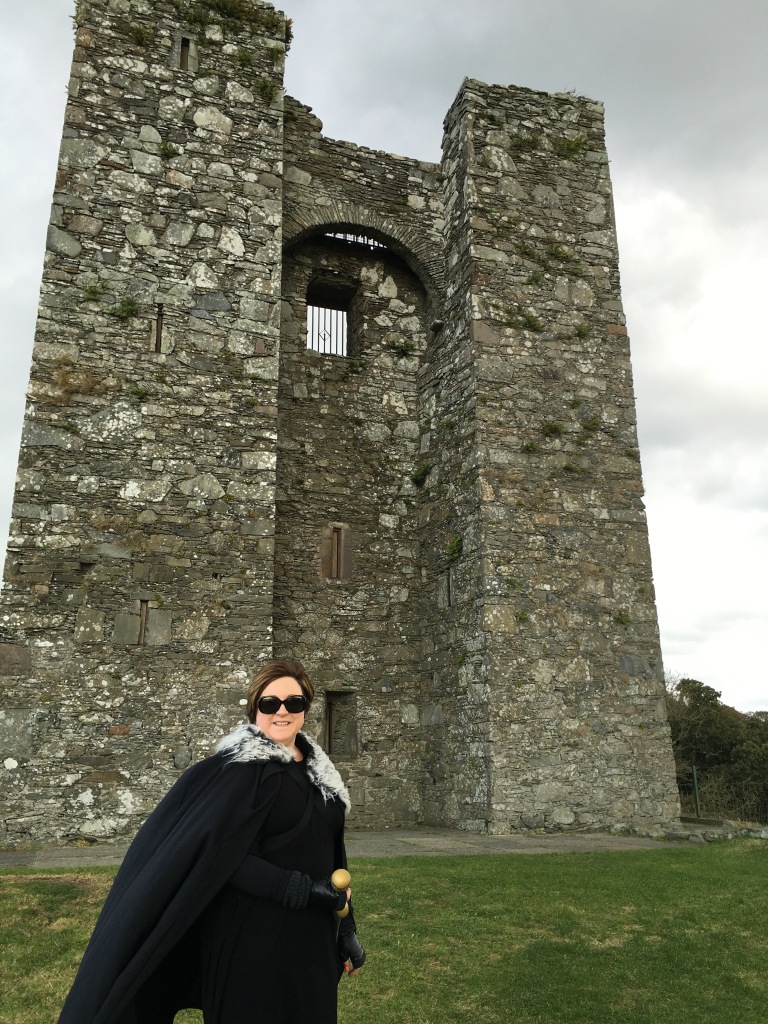 The Westeros self-guided cycle trail leaves Winterfell Castle and follows the demesne shoreline around to Robb’s Camp where Jamie Lannister was held captive in cage (aka Audleys Castle). The castle perched atop a hill enjoys fantastic sweeping views over Strangford lough – these waters are where Brienne brought Jamie Lannister ashore in a canoe & fittingly also where St. Patrick came ashore in a boat back in the 5th Century (the Vikings gave the lough the Norse name ‘Strangfyorthe’, meaning place of strong tidal currents or strong fjord).

Other key Game of Thrones filming locations included in the Westeros trail are: 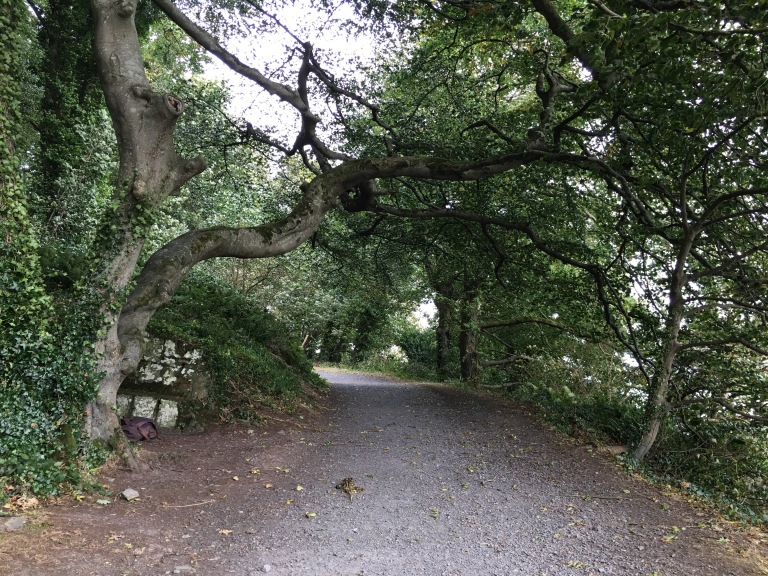 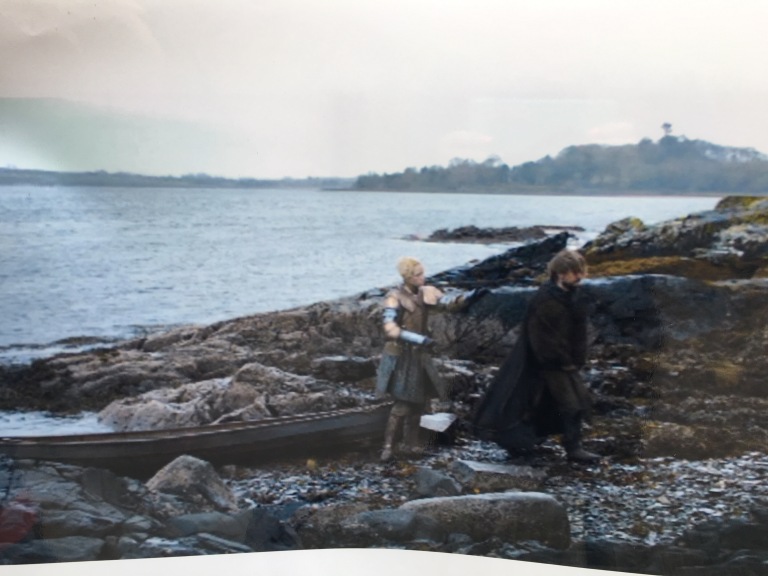 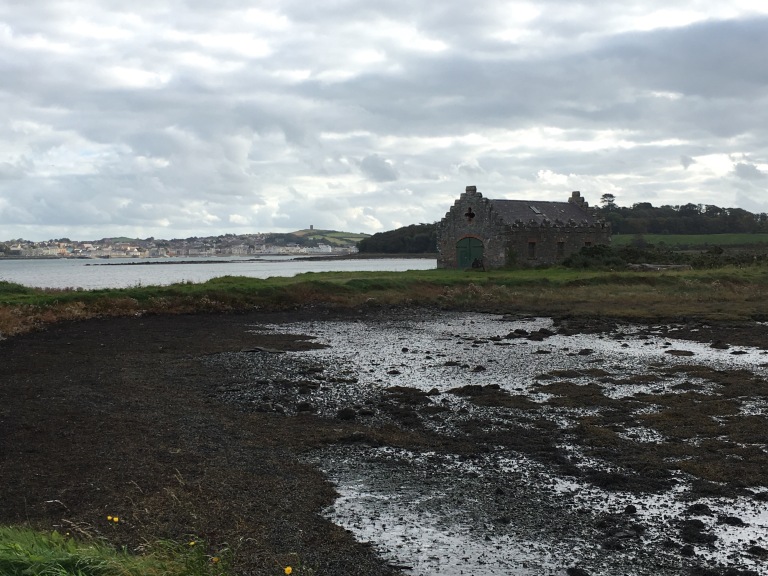 Next up was an archery session

The Archery Range Film Set still stands in the Winterfell Castle courtyard where the filming originally took place. Winterfell’s Master-at-Arms greeted us and we got to dress up in character costumes. We stood exactly where ‘Jon Snow’, ‘Robb & Bran Stark’ stood and enjoyed the thrill of firing live arrows.  Harry ended up quite good at it. Relax your bow hand! 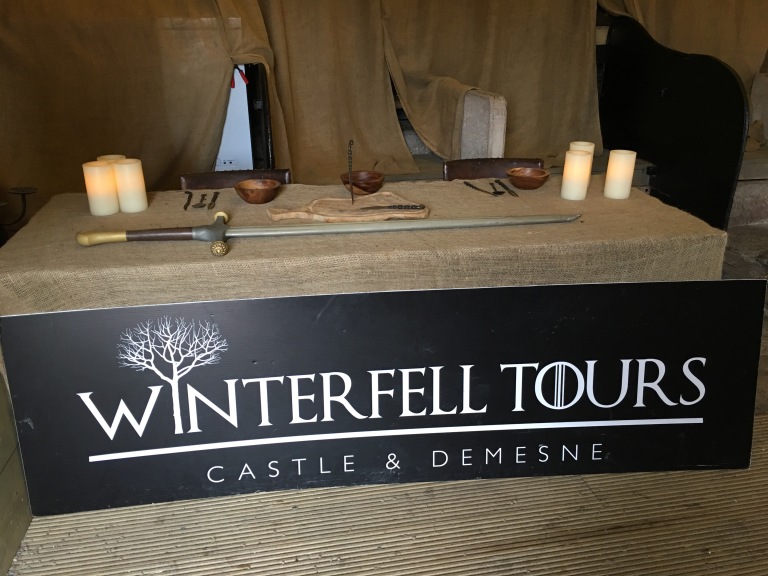 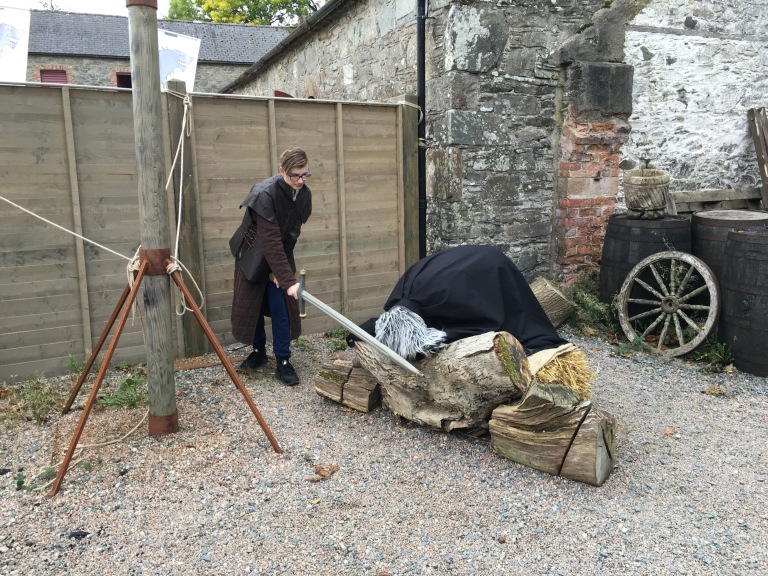 After this we were had planned to take the car and drive to a few places up on the coast but I was feeling so unwell that we regretibly ditched those plans and went back to the penthouse to sleep all afternoon. I felt so crook, huge headache and a feeling like I would throw up.  I slept until 6pm then dozed until 9pm .

We had a dinner booking at 9:30  at The Muddler’s Club for Josh’s birthday and I made myself go. The restaraunt was in a really funky part of town and I so wished I was well. Dinner looked amazing and the waitress was so patient with Harry choosing from such a fancy menu. She  ended up helping to choose scallops with the cauliflower purée on the side so he could try it, and a custom medium rare steak and chips. They let him taste sauces and he chose one for his steak. He was enthralled with the kitchen and watched them prepare desserts and decided what he would have on that basis. Both he and Josh had a wonderful meal. The waitress encouraged me to have the soup and it was so delicious but it only lasted half and hour in my belly and I was in the loo bringing it back up.😞 was worth tasting though! 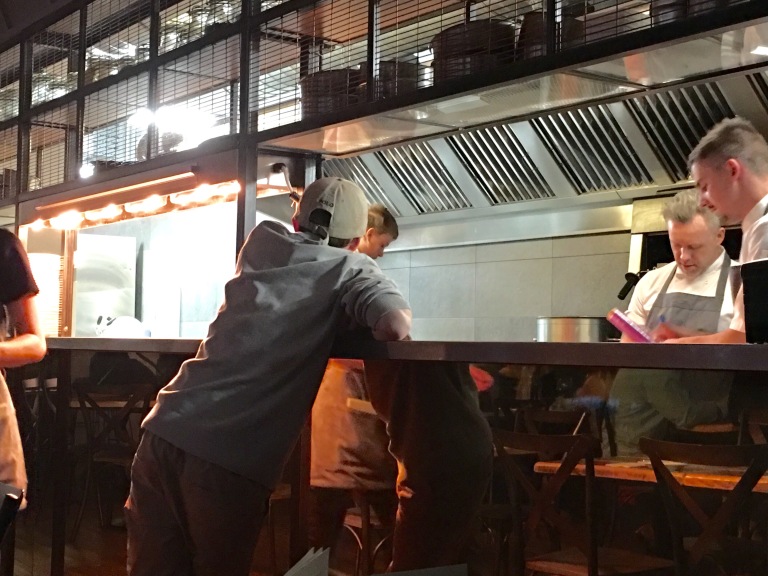 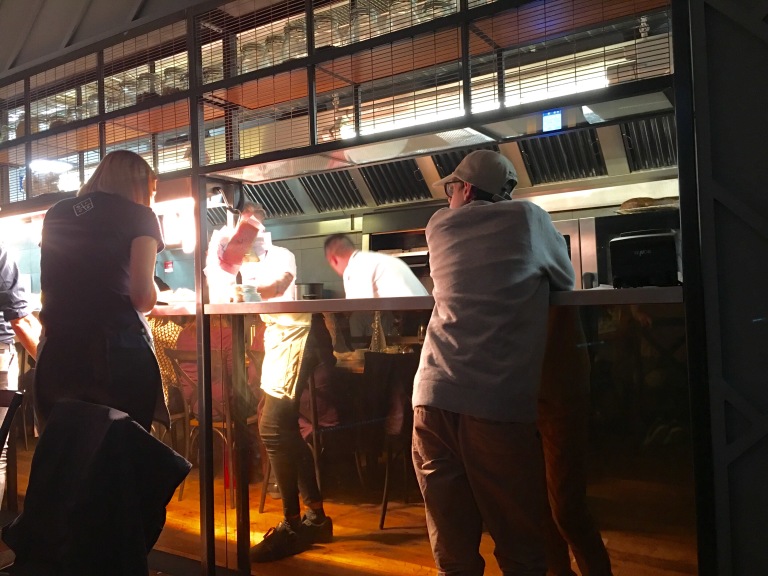 Can recommend a meal here whenever you are in Belfast!

Bed was very much looked forward to tonight.

Some afternoon shots from our penthouse apartment.