Today was a big day of driving. The Ring of Kerry is 179 km long and passes through spectacular landscape awash with history and exquisite views.

Commonly this is the route: Killarney – Killorglin – Kells – Caherciveen – Waterville – Caheerdaniel – Sneem – Kenmare – Muckross House and Lakes – Killarney. It is recommended to do the drive anti clockwise to   avoid meeting tour buses like the one we are on! 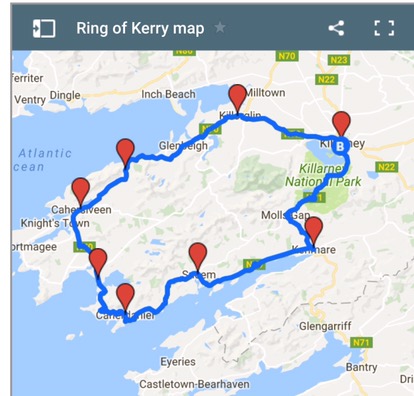 Puck Fair is one of Ireland’s oldest festivals. Where a wild mountain goat is crowned King and reigns over the town of Killorglin for three days. Every year a group of people go up into the mountains and catch a wild goat.The goat is brought back to the town and the “Queen of Puck”, traditionally a young school girl from one of the local primary schools, crowns the goat “King Puck”. The “King” is then put into a small cage on a high stand for three days, and on the 3rd day of the fair, he is brought down to be led back to his mountain home. In the middle of the town square, he is crowned and this signifies that the festivities may begin. The pubs stay open until 3.00 AM, which is a legal exception due to the fair as all bars in Ireland normally must close at 2.00 AM. 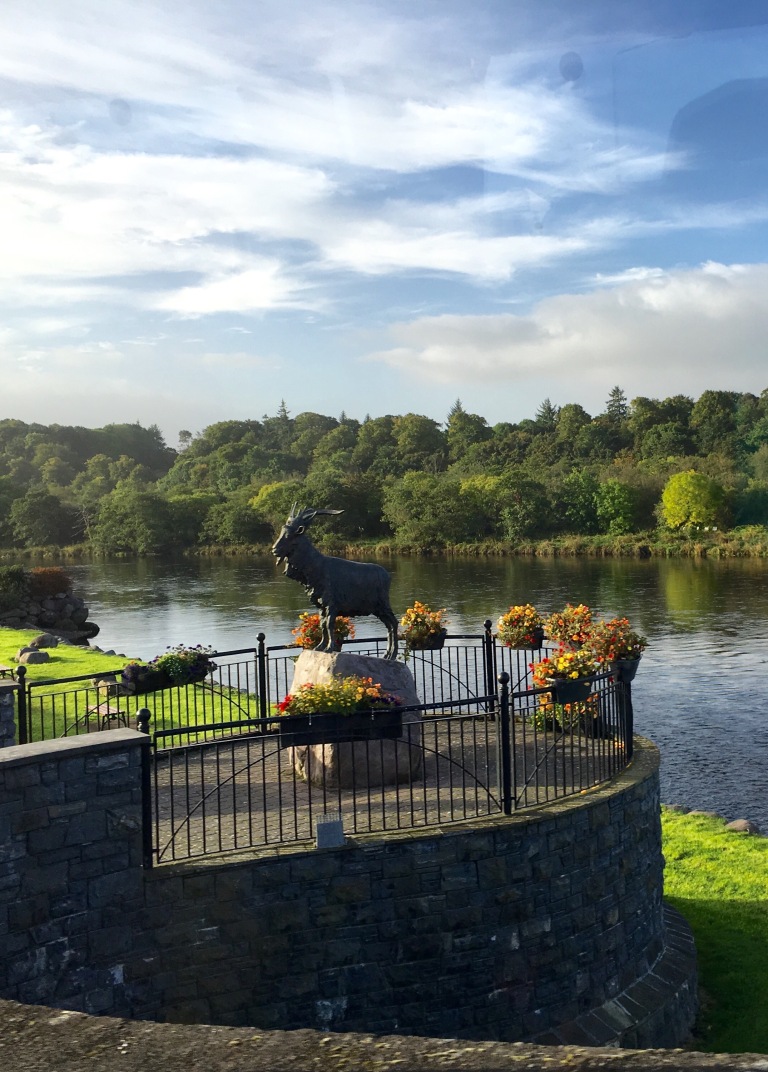 We made a stop on the side of the road where a genius Irish man is making money from having his dog sit on his donkey while he makes Brigidine crosses!

A fleeting glimpse of Kells Bay which is one of Ireland’s best beaches and holiday spots. It is also the location of a famous unsolved murder known as the Kerry Babies Case. You can read about it here.

Cahersiveen
The birthplace of Daniel O’Conner politician known as the Liberator of Ireland. He campaigned for Catholic emancipation, including the right for Catholics to sit in the Westminster Parliament, denied for over 100 years. He also campaigned for the repeal of the Act of Union which combined Great Britain and Ireland. You can read about him here (also has a list of quotes by him)

The town as a church dedicated to him. It is the only church in Ireland named after a lay person rather than a saint and as such it has no spire only a dome. 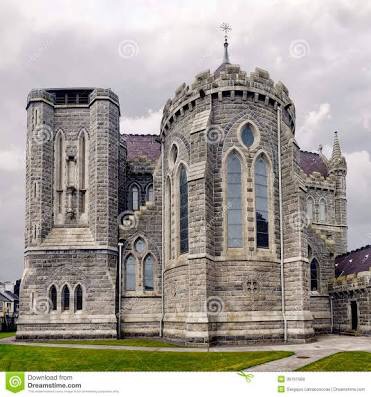 Next stop was. Waterville where Charlie Chaplin regularly stayed at The Butlers Arms. 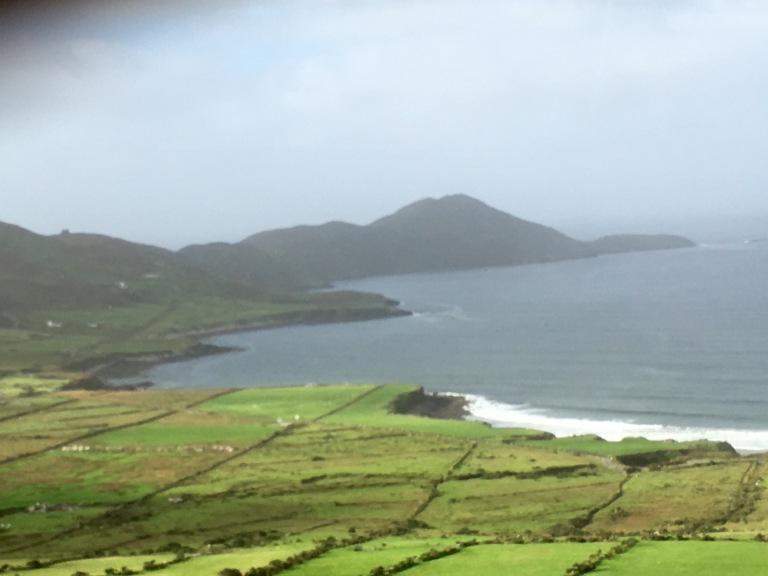 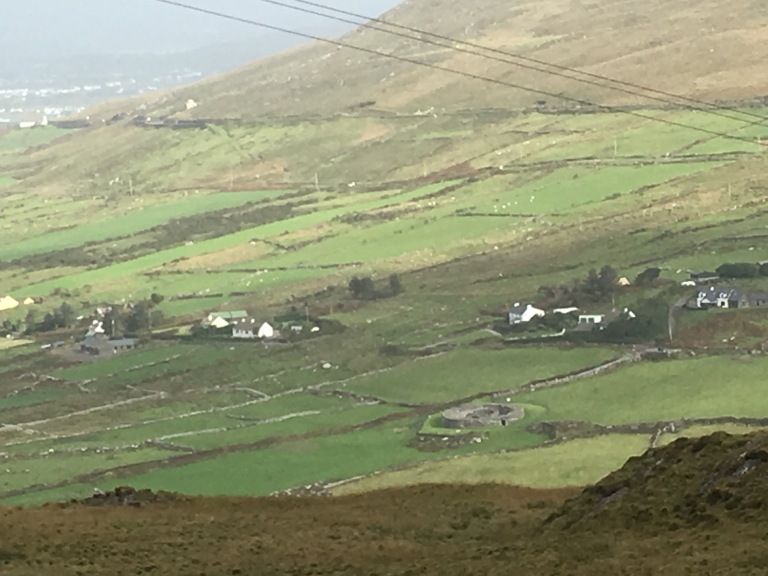 At one stop another Irish genius rocked up with a menagerie of animals for which he seeks a coin or two if you stop for a pat or a photo (which of course Harry did!) once he has enough money, he buys some moonshine from the other vendor selling ‘jam’, and goes home to get tanked!

It was also the stop where the Skellig Islands would be visable if it was clear. Skellig Michael is where Star Wars is being filmed (the deserted island Luke Skywalker is seen on at the end of the latest film. Unfortunately it wasn’t clear enough to see. 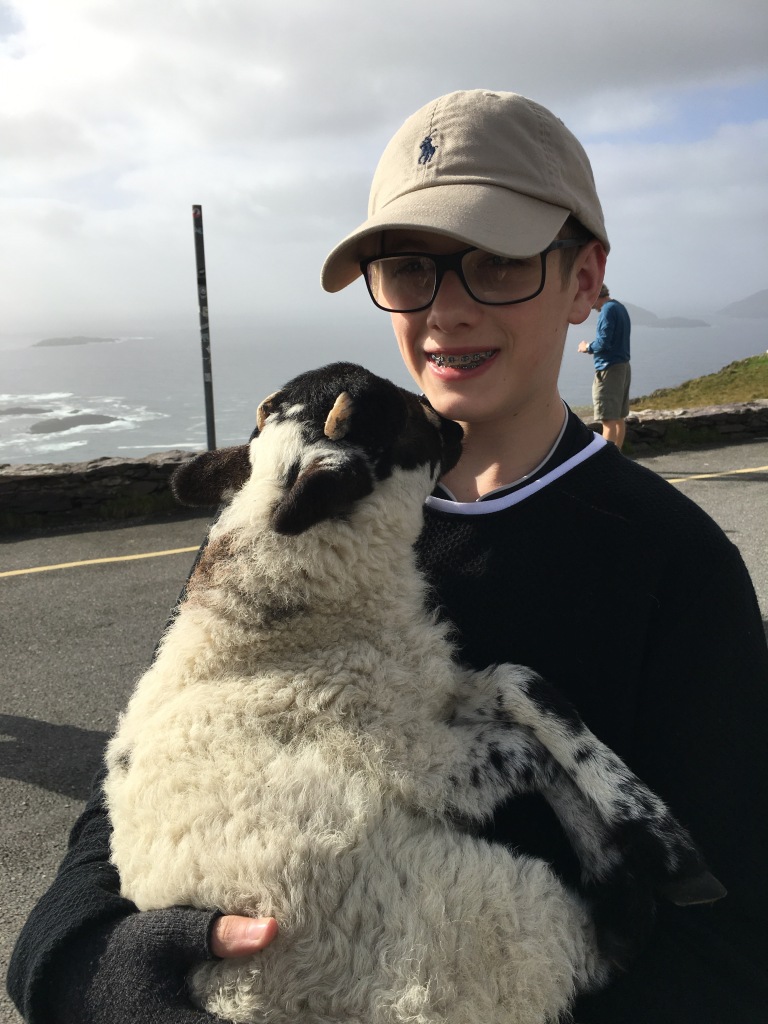 There were lots of ruins of croft houses that people had left because they had either died during the Potato Famine or migrated. You can read about this period in history for your self and there are many explanations for what happened but I like this one: Famine

Was our lunch stop and a lovely B&B. They had laid out sandwiches and scones for us. The owners had been friends of Maureen O’Hara and she regularly stayed in bedroom 1.

After eating we had a wander around the village and met another animal for Harry to love. 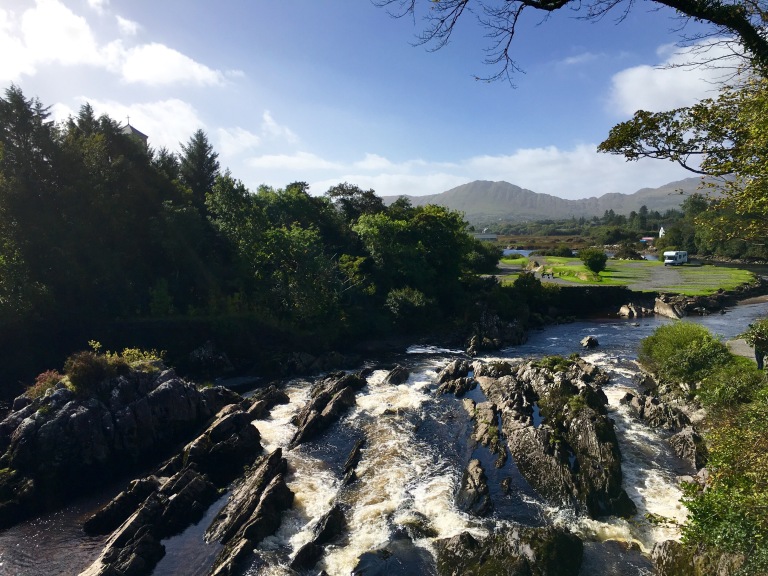 There were lovely little spots around the village.

We continued our journey and the scenery became more and more stunning. 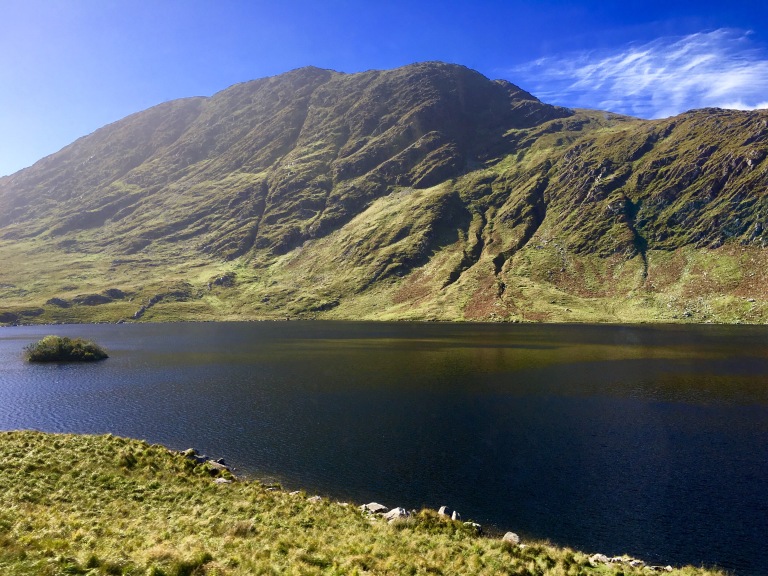 One final stop at Ladies View for a group photo and a bog dance! And tree climbing by Harry. 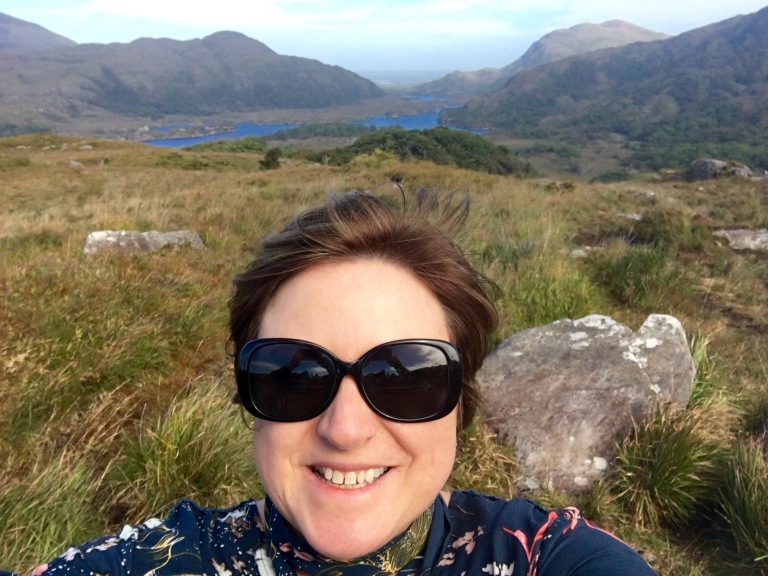 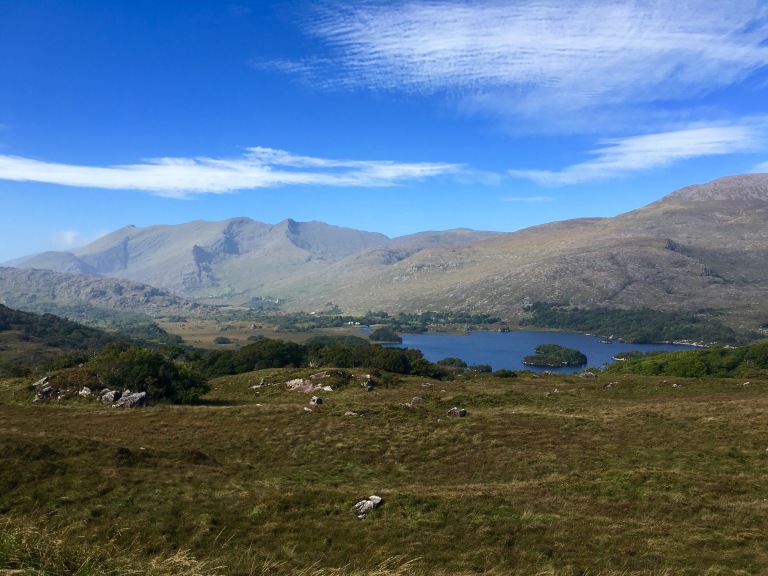 There was also a Leprechaun crossing nearby- 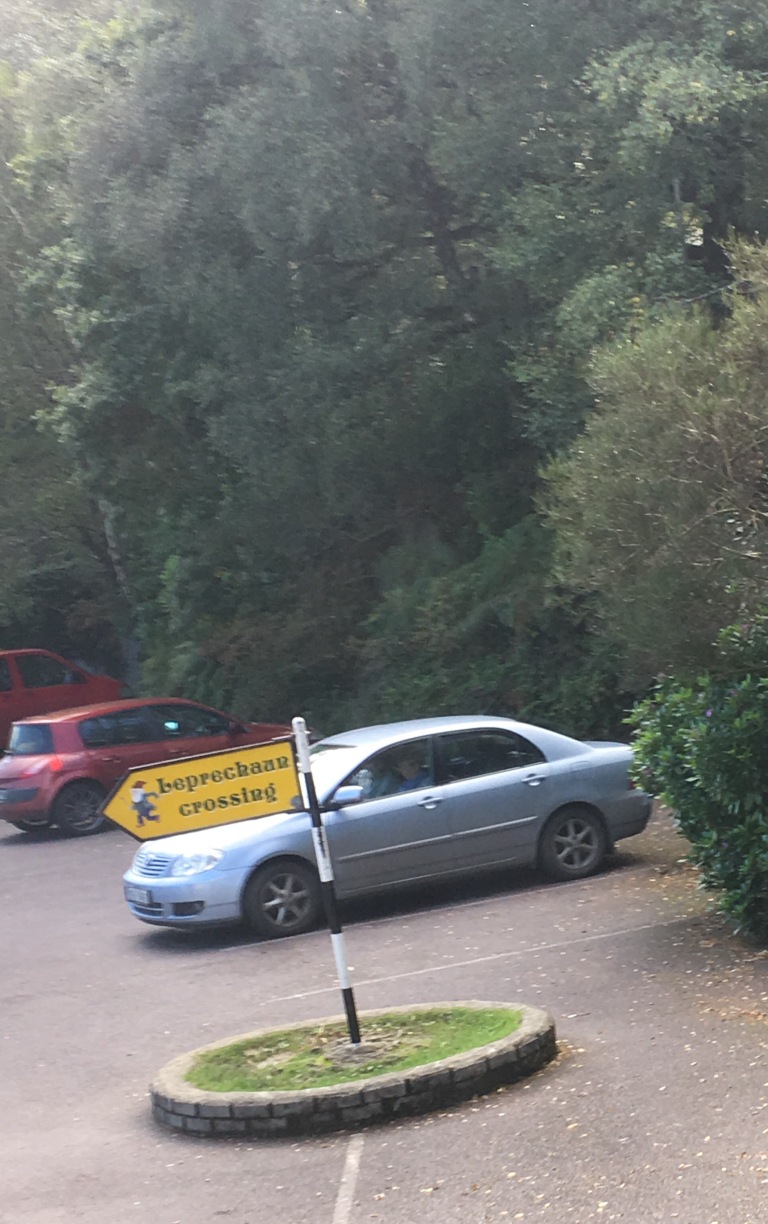 In our free time this afternoon we decided to take a bike ride in the national park around Muckross lake. This idea took 3 hours and started off as a leisurely 21km ride through the forest stopping to look at Muckross Abbey and views over the lake. 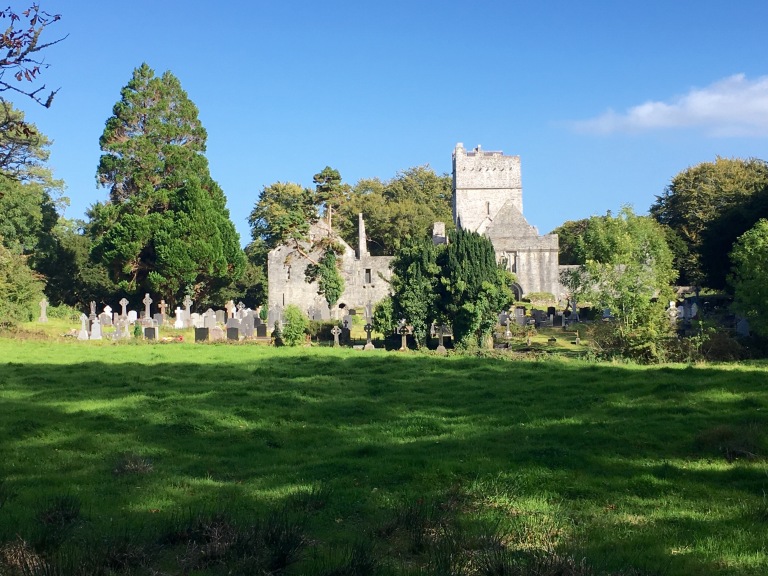 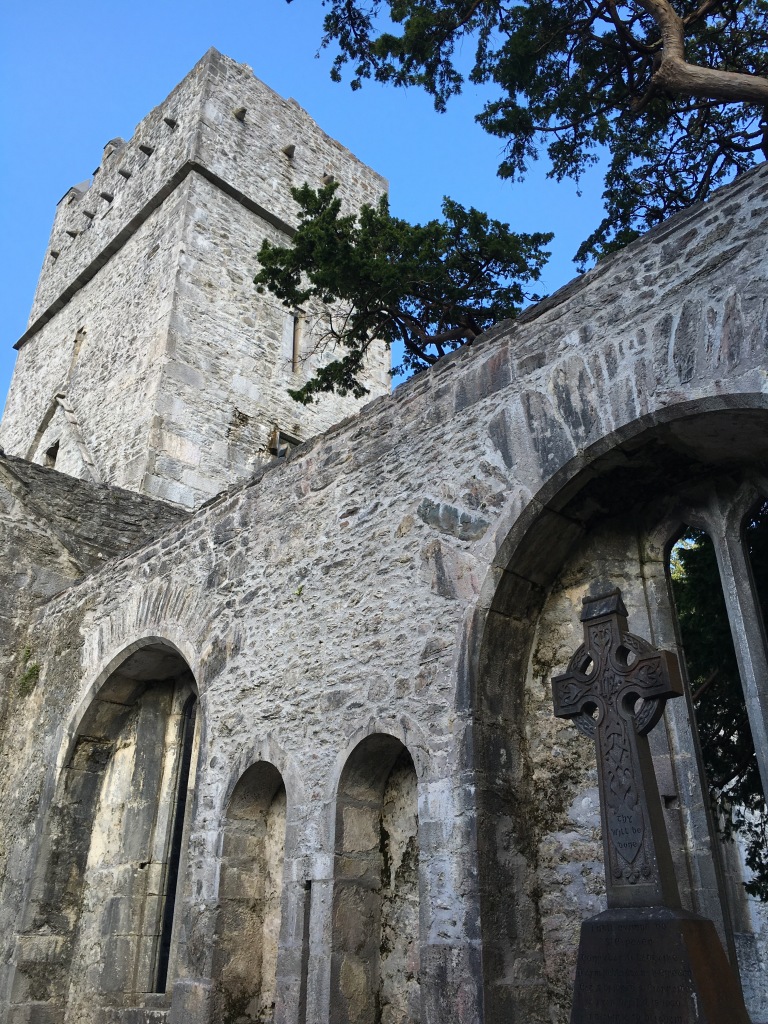 At one point Josh his in a very dark room of the abbey and scared the living day lights out of me. My screams echoed throughout the empty building!

The leisurely ride soon turned into a nightmare as we realized the final 5 or 6 km was on the main road. The Ring of Kerry road. The road with all the cars and tourist coaches. We had no helmets or high visibility clothing. There was no other way and I was terrified. For me and for Harry as I had to see him ahead of me and I was constantly fearing the worst.the other complicating factor was that we had to return the bikes by 6pm and we were certainly pushing it with me crying and stopping all the time. At one point Harry and I were able to follow a jaunting car off road for a bit and when we got to a turn off to the Abbey we want that way and rode the way we had come earlier even though it lengthened our trip. Josh stayed on the road in order to get to the bike place and stop him closing if we were late. Harry and I made it at 5:59pm! My legs were like jelly and my butt was killing me and we still had to walk back to town!

Back at the hotel I dived into a warm bath before we headed out for a Thai dinner. We were starving and demolished our food.

Harry was asleep before his head hit the pillow. I’m sure we swill all be stiff and sore tomorrow.

One thought on “The day I thought I would die”