Day 12:  Galway to Limerick
We nearly caught a Leprechaun this morning. There was a stunning rainbow on the drive to Knock. Somewhere near the leprechaun was guarding the pot of gold.

The Story of Knock began on the 21st August, 1879 when, at approximately 8 O’ clock in the evening, fifteen people from the village of Knock in Co. Mayo, witnessed an Apparition of Our Lady, St. Joseph, St. John the Evangelist, a Lamb and cross on an altar at the gable wall of the Parish Church.

The witnesses watched the Apparition in the pouring rain for two hours, reciting the Rosary. Although they themselves were saturated not a single drop of rain fell on the gable or vision. There were fifteen official witnesses to the Apparition, most of whom were from the village of Knock and surrounding areas and ranged in age from just 5 years old to 74 years old. Each of the witnesses gave testimonies to a Commission of Enquiry in October 1879. The findings of the Commission were that the testimonies were both trustworthy and satisfactory. 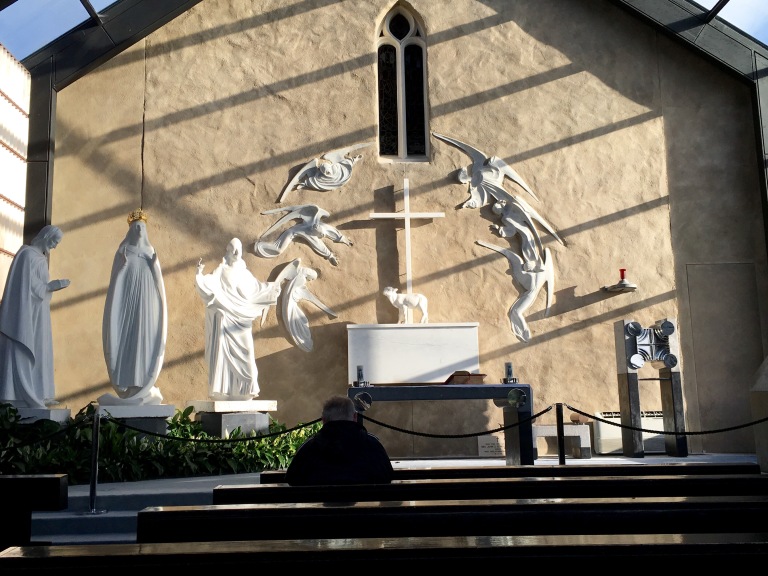 Josh witnessed a tourist filling a container with the holy water and taking a drink. Then she saw the sign saying  ‘Do not drink’ and she spat the holy water out! 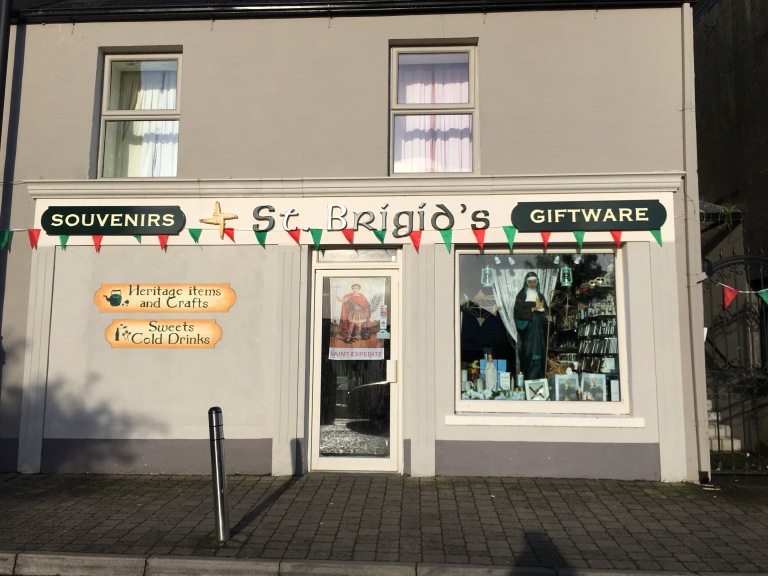 Rain and shine and rain and wind and sun again! I couldn’t keep up with the weather in our 2 hour visit! It was pouring and raining sideways and we turned a corner and it was sunny!

We wandered through the Latin quarter and end up in an Italian restaurant for lunch. 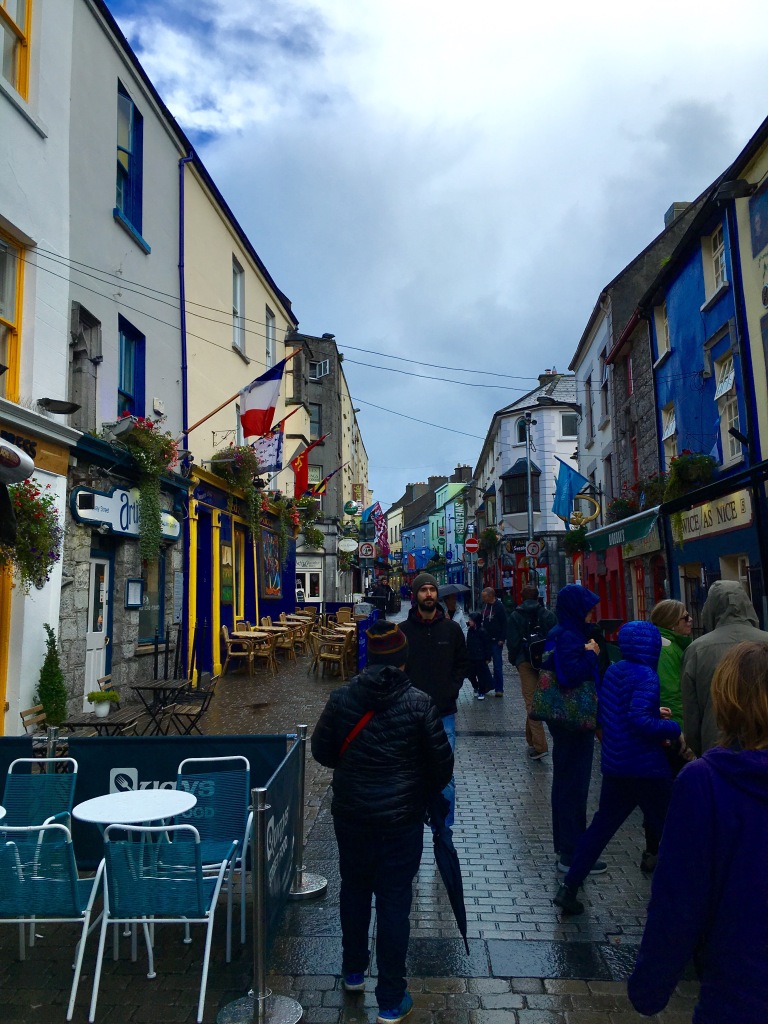 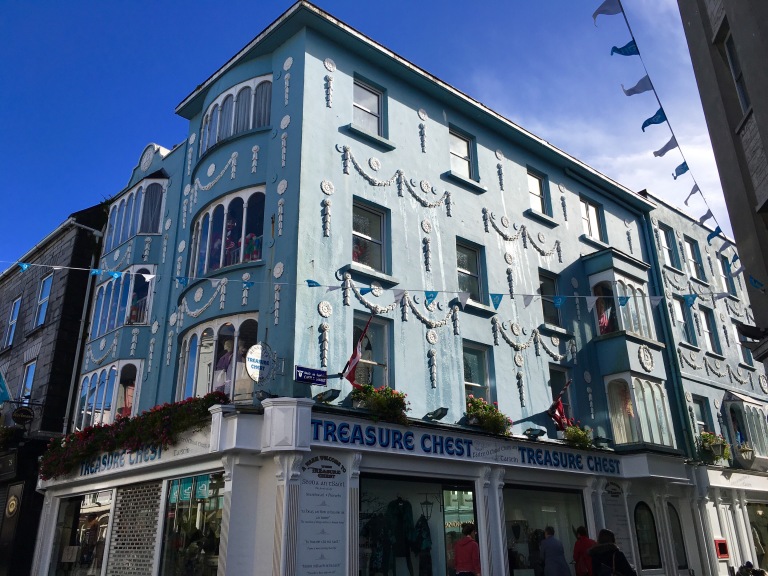 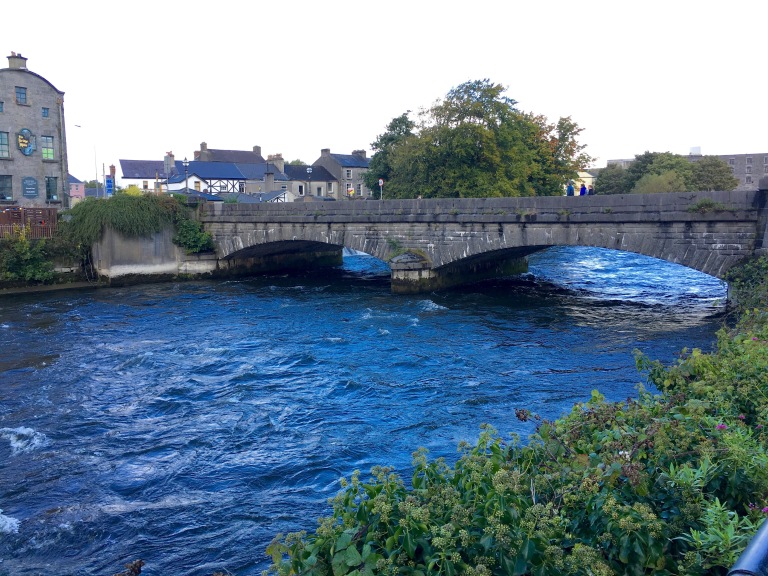 I really wanted a Claddagh ring so Harry bought one for me for my birthday with my money! The lady game him €5 off! 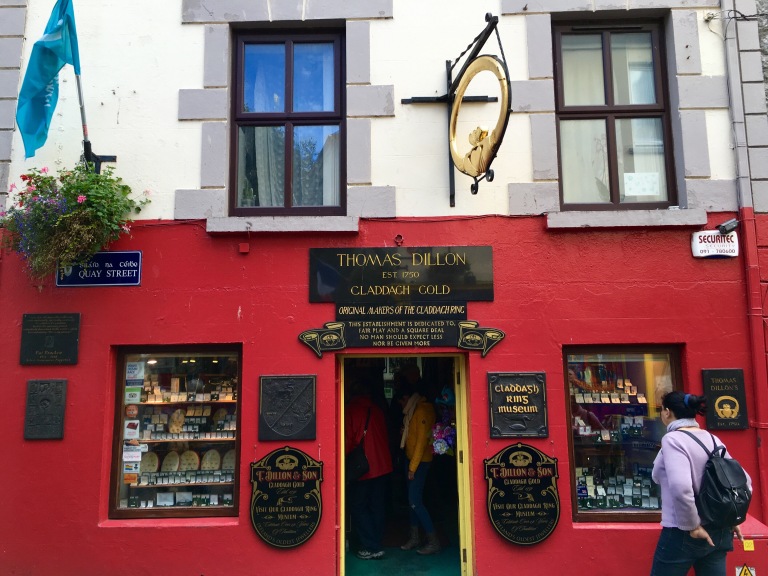 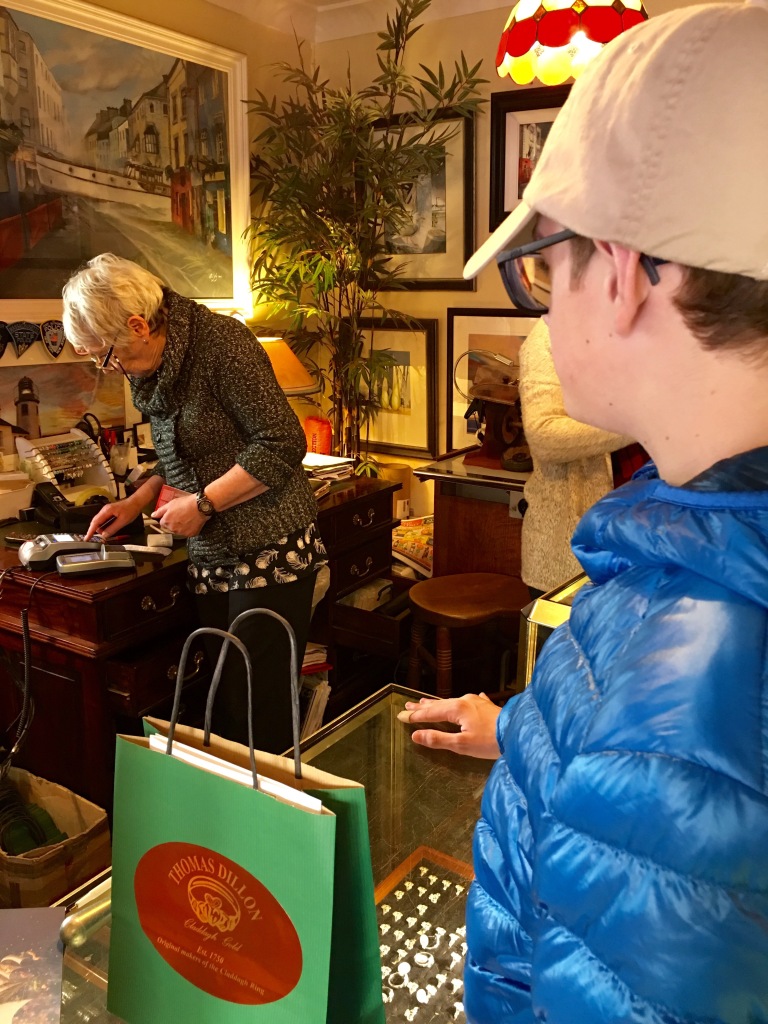 Came across a little store selling Flaggy shore Oysters so I indulged on the street. Such a taste of the sea!

Read out a limerick on the way to Limerick but it was a bit rude so I won’t post it here. Got a roar of laughter though! I ended up writing some clean ones about our fellow bus travellers.

There was once a boy named Harry

Whose parents bags he would not carry

Told him he was bad

And no woman would to him want to marry

There once was a girl named Marie

Who was a terrible sweetie

She caused a fuss

By being late for the bus

When the passengers wanted to pee

There once was a man named Bob

Who was never slack on the job

Harry gave him a high five

And taught him to jive

And now he’s a total yob

There once was a lass called Jana

Who hated her name rhymed with banana

So the Aussies called her Jana

Which rhymes with potata

She loved it more than piranha

There was a lass called Katrina

Who had a lovely demeanor

Her husband was Bruce

Who lived in suits

And who’s house couldn’t be cleaner

There was a bus driver called Dee Dee

They soon got blocked up

And made him stop

Now they are shouting yippee

Known as the city of seiges it’s located on the Shannon River and it’s most famous landmark is the castle of King John and the Treaty Stone which we will learn more about tomorrow.

We had a few hours before our dinner show so we went for a river walk and came across a fundraiser for the River Rescue Organization. Harry did some rock climbing, archery and zorb balling. A lot of fun and burned off some some excess energy! 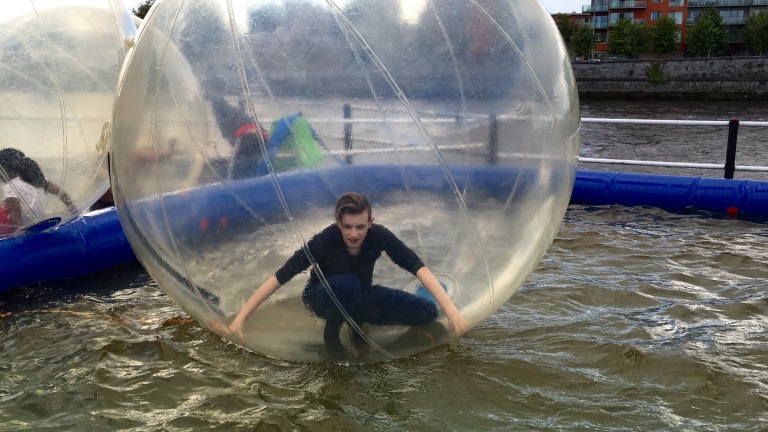 Medieval banquet Dinner and show at castle. We were hoping this was better than the Taste of Scotland show and it was! 1 million times better and lots of fun.
Knappogue Castle has been standing amid the lush green fields of Quin, Co. Clare since 1467.  (History of the castle is here Castle history )

The Castle banquet featured a colourful programme of music, song, and dance toasting the Kings of Ireland. We were greeted at the main door of the castle by the Earl’s Butler and the Ladies of the castle who directed us to the Dalcassian Hall where we savoured a goblet of mead (honey wine). This was rather nice so I polished off Josh’s as well.

We enjoyed music of the harp and fiddle followed by Medieval choral singing from the Ladies. The Earl’s Butler wittily recounted the history of the Castle finishing by explaining the ‘Rules of Chivalry’ practiced at Knappogue Castle and the dire consequences of breaching them! Josh was directed to ensure my goblet of mead was always full. He did such a great job at this that when I got home to bed I had to deal with the dreaded bed spins.

Once we were all seated in the banqueting hall, the newly instated Earl received his sword of office and presided over the proceedings. While we dined on a four course dinner, the Ladies of the Castle, accompanied by Irish harp and fiddle entertained us. After dinner we were treated to a magical journey of music, song and dance from medieval times through to the 20th century. We totally enjoyed it! 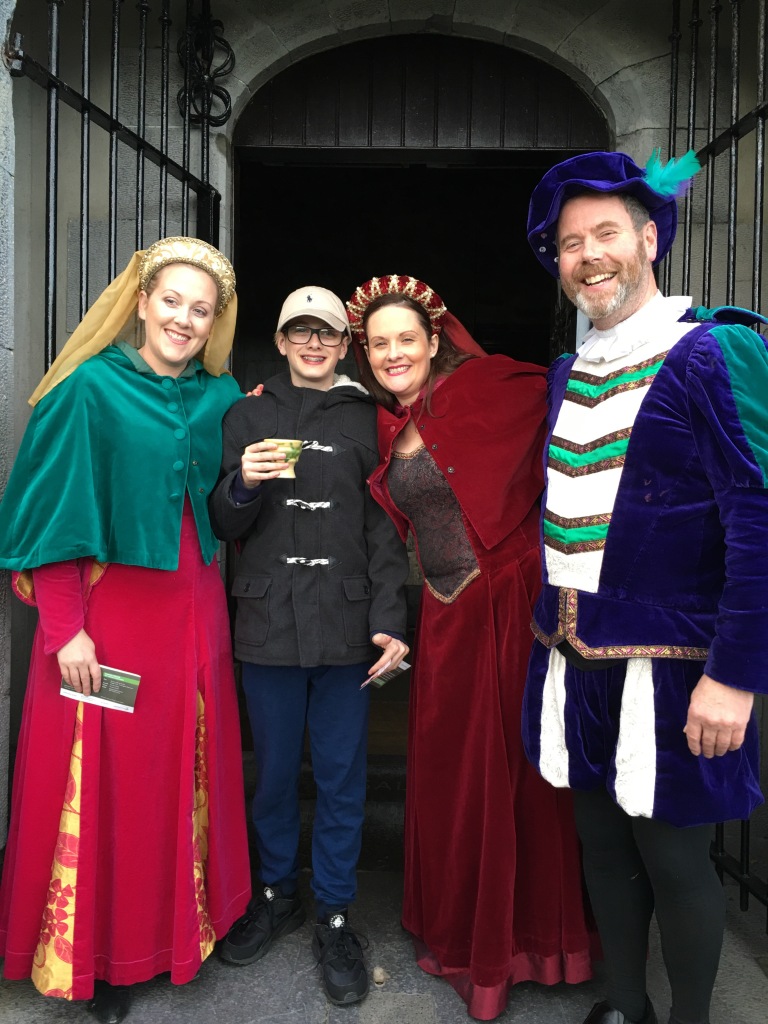 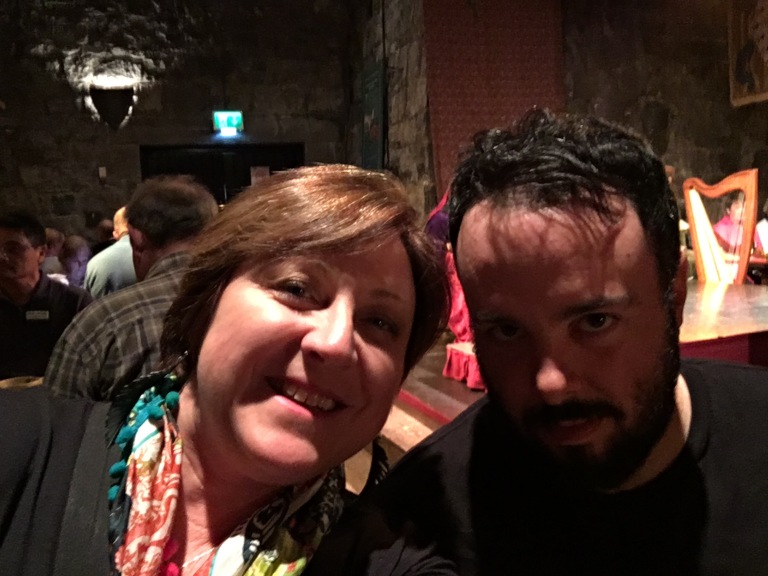 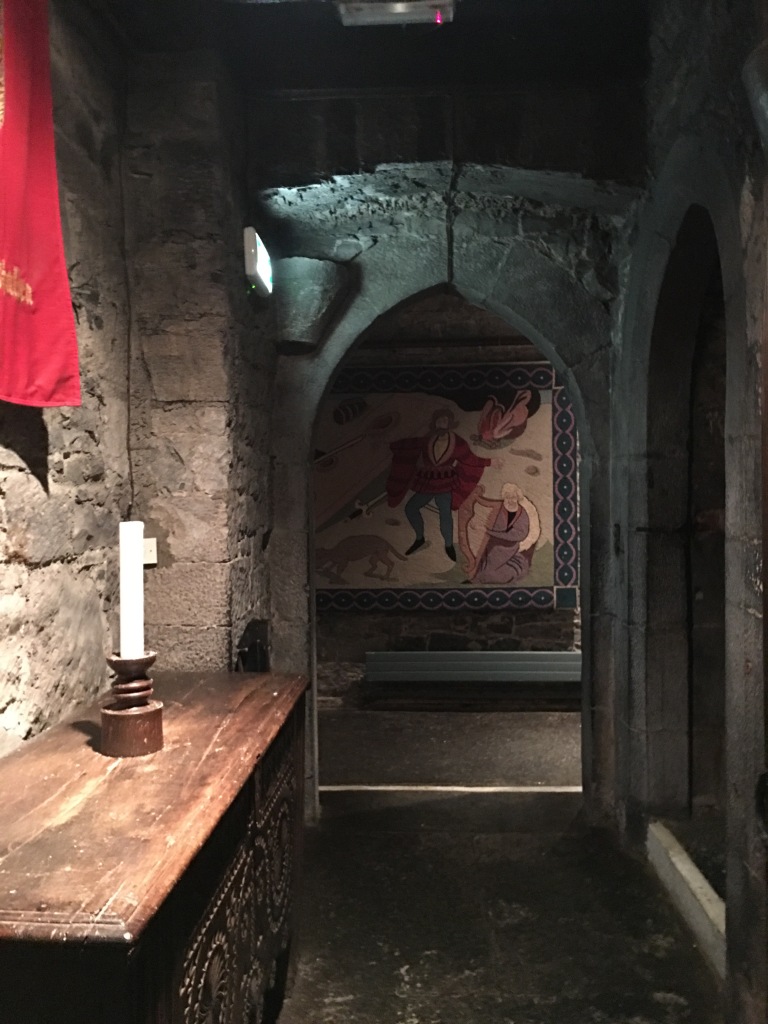 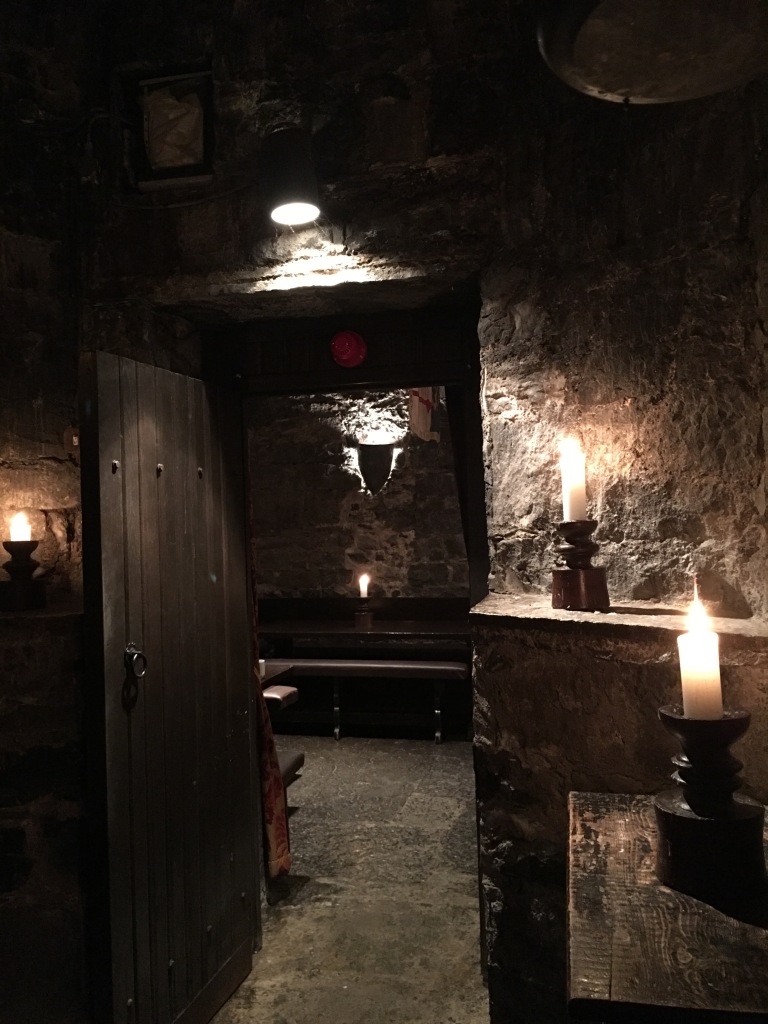 One interesting aside is the amount of gypsies here. The government has built them houses but they live in the caravans, sell all the fittings from the houses and keep their horses in them. As if on cue, as we passed a group of houses a man led his horse out. We probably wouldn’t have believed it otherwise!