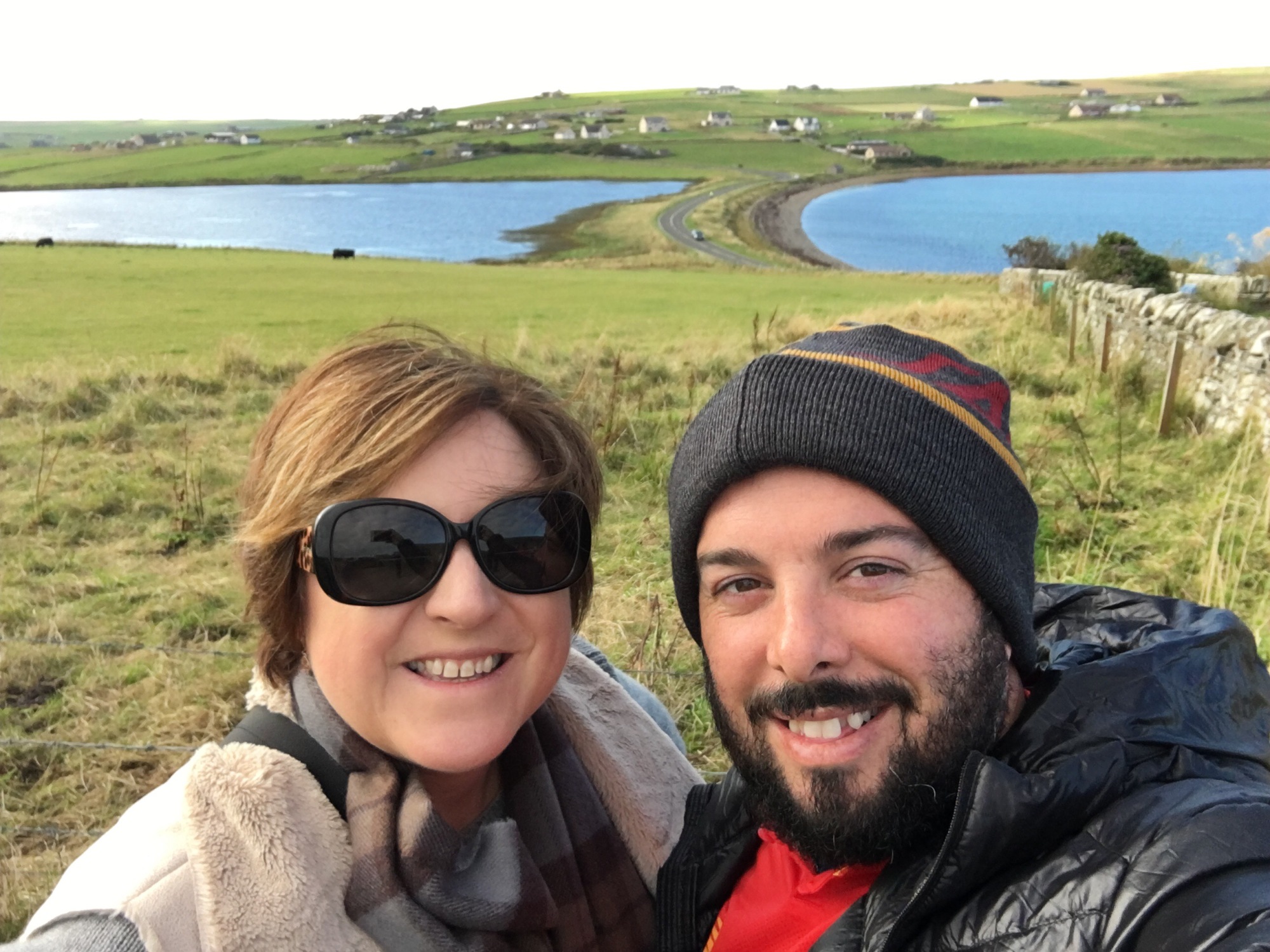 Day trip to the Orkney Islands where the people live ‘Below the wind and above the water’. The ferry leaves from John O’Groats which is the most northern part of Britain. The End of the road quite literally! The crossing takes 40 minutes and thank goodness we had calm waters today because it is the North Sea and Atlantic Ocean! Harry and I had taken some sea sickness medication. Harry went to sleep but I preferred to be out on deck watching the horizon. 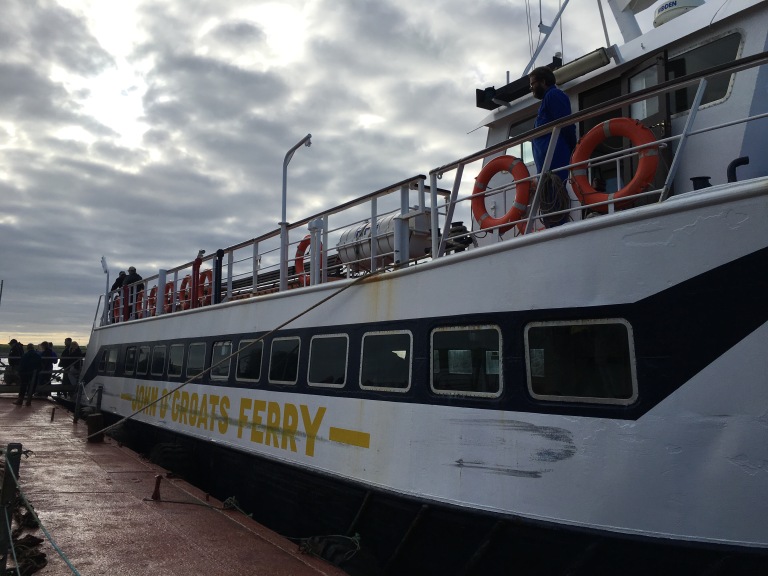 Orkney is an archipelago off the northeastern coast of Scotland. There are 70 islands and 20 are inhabited.  Orkney was invaded and forcibly annexed by Norway in 875 and settled by the Norse. The Scottish Parliament then re-annexed the earldom to the Scottish Crown in 1472, following the failed payment of a dowry for James III’s bride Margaret of Denmark. Orkney contains some of the oldest and best-preserved Neolithic sites in Europe. The ‘Heart of Neolithic Orkney’ is a group of 5,000-year-old sites on Mainland, the largest island including Skara Brae, a preserved village with a reconstructed house, and Maeshowe, a chambered burial tomb incorporating 12th-century Viking carvings.

The biggest island with the town of Kirkhall is called Mainland or sometimes just ‘the toon’.

Our first stop was at the Fossil and Heritage Centre for a cup of tea and shortbread. The shortbread was the best I’ve ever tasted that compares to my girlfriend’s mum’s recipe. Needless to say they would not share the recipe!
We shared a funny moment when we first arrived. Josh sat at the tea table and asked “where are the fossils?” I told him to “look around”. 😂

Our next stop was the Italian chapel built by WW2 Italian prisoners of war who also made the bridges between some of the little islands (called Churchill Barriers). 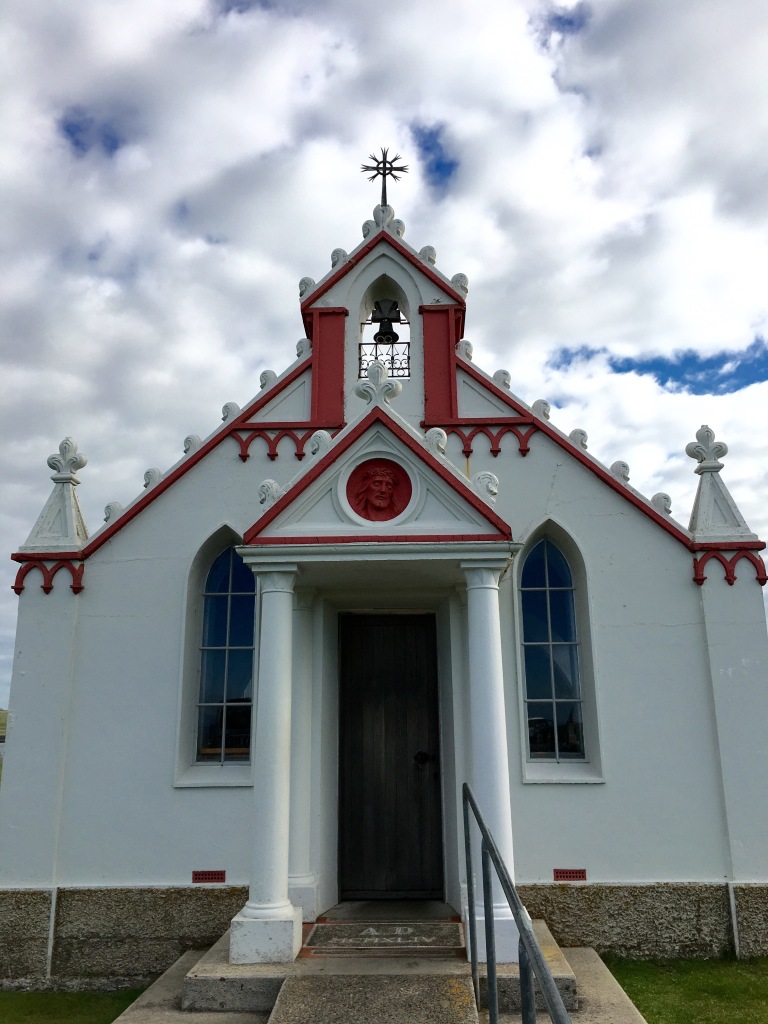 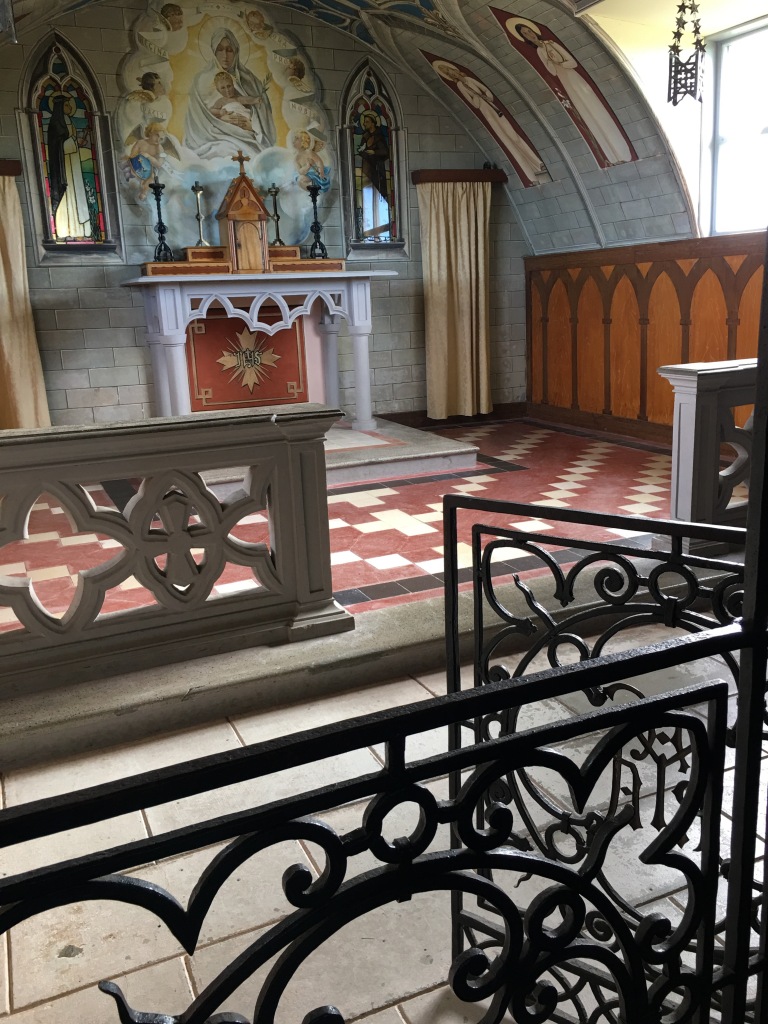 The British Royal Navy used the sheltered natural harbour of Scapa Flow throughout WWI and in the years leading up to the Second World War. One of the ships sheltering at Scapa Flow immediately after the declaration of war was the Royal Oak, a Revenge class battleship built in 1914. On the night of the 13 October 1940 the German submarine U-47 made a daring raid into Scapa Flow, sneaking through the defences, and sank the Royal Oak as it lay at anchor.

Of the 1234 crew, 833 were kiled or died later of injuries. The rusting hulk of the Royal Oak still lies in 100 feet of water, almost completely upside down. It is a designated war grave and its location is marked by a buoy.

To prevent a repeat of the attack, the British decided on a bold plan; to erect a series of four permanent barriers between the islands, effectively blocking any passage. Winston Churchill visited Orkney within a month of the attack and ordered the massive project to be started. They were built by Italian Prisoners of War who also built the Italian Chapel in their spare time.

http://www.britainexpress.com/attractions.htm?attraction=2159
We drove past the Highland Park whiskey distillery – the most northern distillery in Britain.

Lunch was at the Standing Stones Hotel and we are traditional fare. My bangers and mash went down a treat! The mash was a bit fancy being quinelled and all! 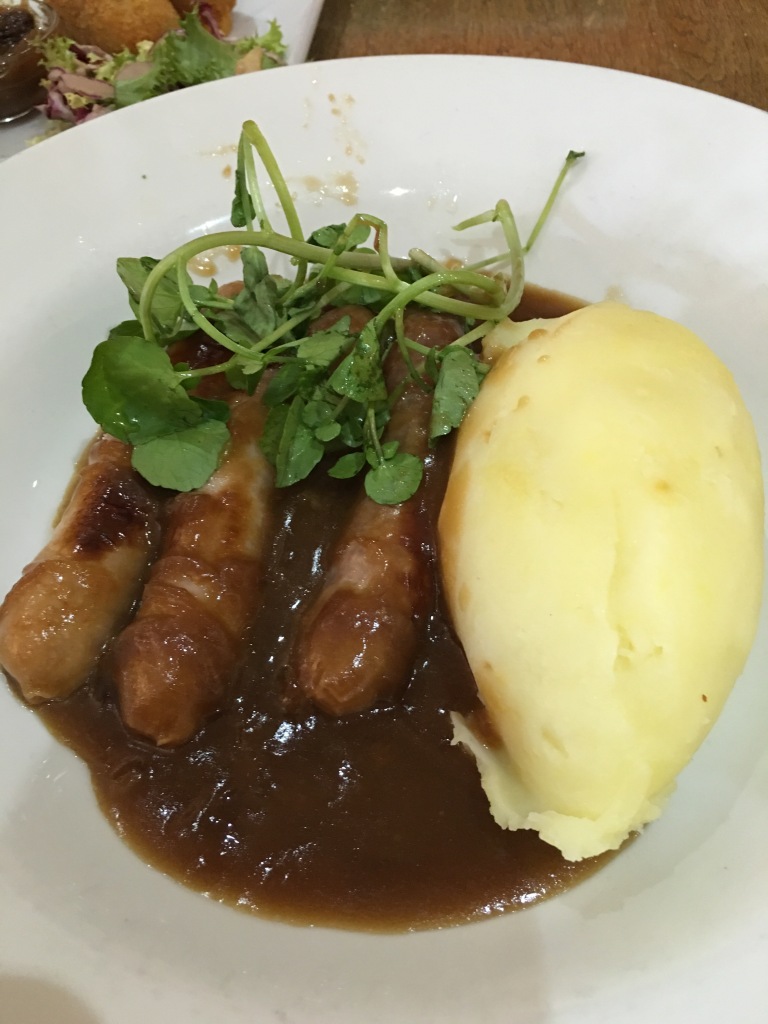 I’ve been trying different gins as we move from place to place and today I tried a local gin from the Orkney Gin Company.

As we are lunch, the Orkney goose hunters club walked through the hotel accompanied their dog. Dogs seem to go everywhere in this country!

The Highland Park whiskey called to us from behind the bar so we had a wee dram. The barley is steeped with peat so the whiskey has a smokey flavour. T’was a nice drop and available at home (as was the Stroma from yesterday!)

The other culinary delight we tasted was the award winning Orkney Icecream. Harry loved it so much he had 2 scoops, as did Josh. Harry tried chocolate, I had lemon curd (heaven!) and Josh had vanilla but after tasting mine went and got another scoop!

Farming is a big way of life in Orkney and we saw the world famous Aberdeen Angus Gold cattle at Quarterness. There are also sheep that eat only seaweed and that gives the meat a different flavour.

The Neolithic settlement of Skara Brae was accidentally discovered when uncovered by a storm in 1850.  Skara Brae gives a remarkable picture of life 5,000 years ago, before Stonehenge was built. The ancient homes are fitted with stone beds, dressers and seats. A replica house allows you to explore its interior and imagine what life was like living in a community by the sea. 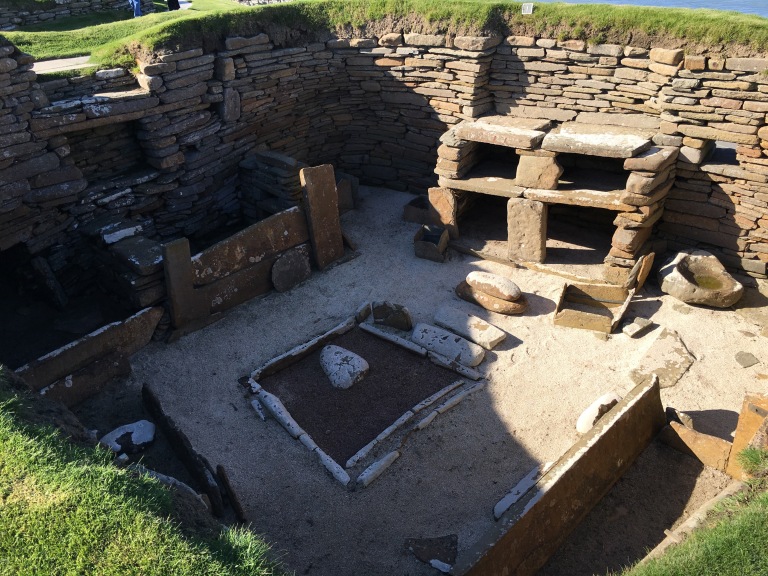 Part of the tour included visiting the home of the farmer who’s land Skara Brae was on and who stumbled on the ruins. 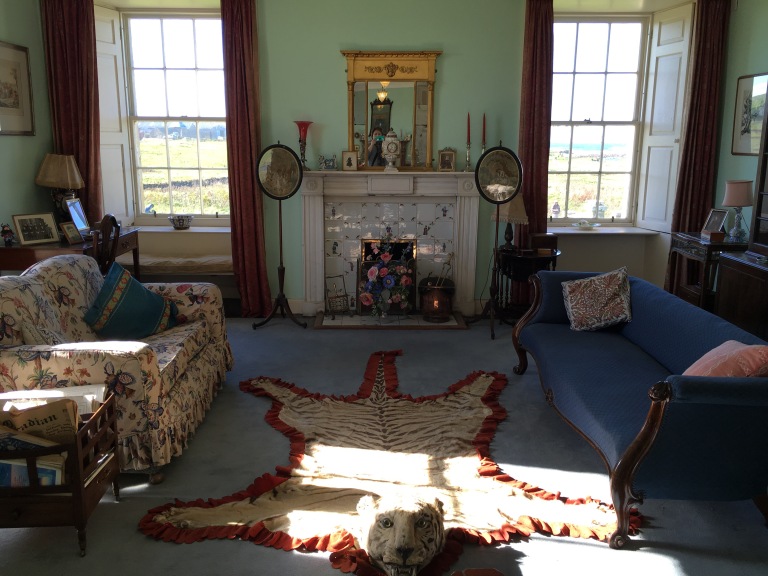 There are quite a number of standing stones in the Orkneys that it’s a wonder Claire didn’t end up here when she went through the stones! She could have fallen in love with a fisherman or a peat bog farmer instead of a Highland warrior!

Ring of Brodgar is just one of the circles. 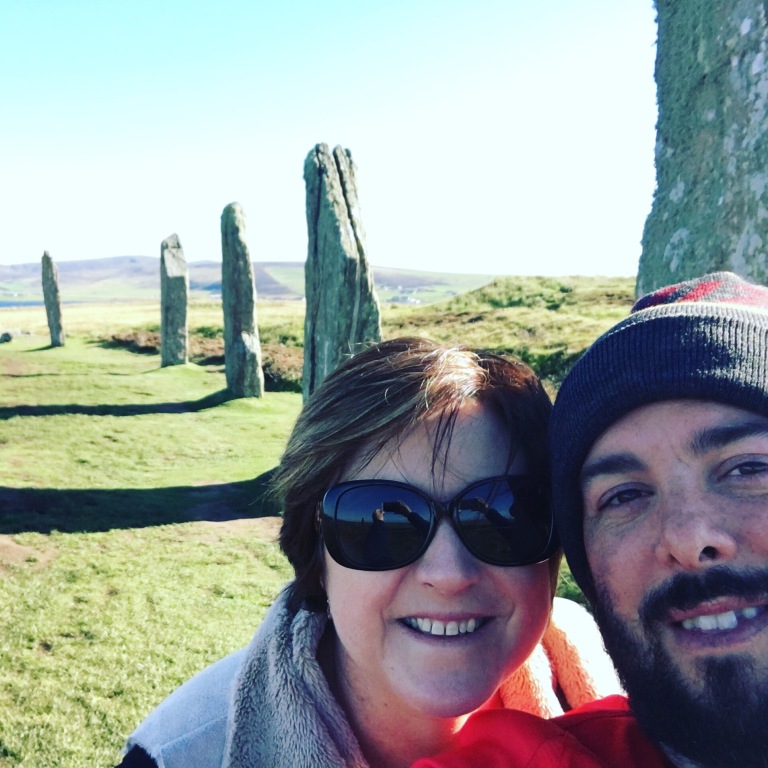 Nearby is Maeshowe, the finest chambered cairn (tomb) in north west Europe and is more than 5,000 years old. Viking crusaders broke into the cairn in the 12th century and carved graffiti runes on the walls of the main chamber. Maeshowe is part of the Heart of Neolithic Orkney World Heritage Site, along with Skara Brae, the Ring of Brodgar and the Stones of Stenness (which we saw only from the bus). We only glimpsed the cairn from the bus but it sounded so fascinating as during the Orkney winter solstice the Viking runes seem to glow. 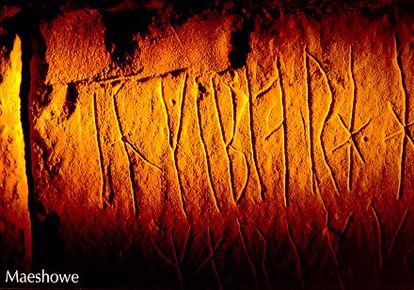 The rest of the afternoon was spent in Kirkwall exporting the St Magnus Cathedral (which has the bell from the Royal Oak) and the little ‘toon’ and harbour. 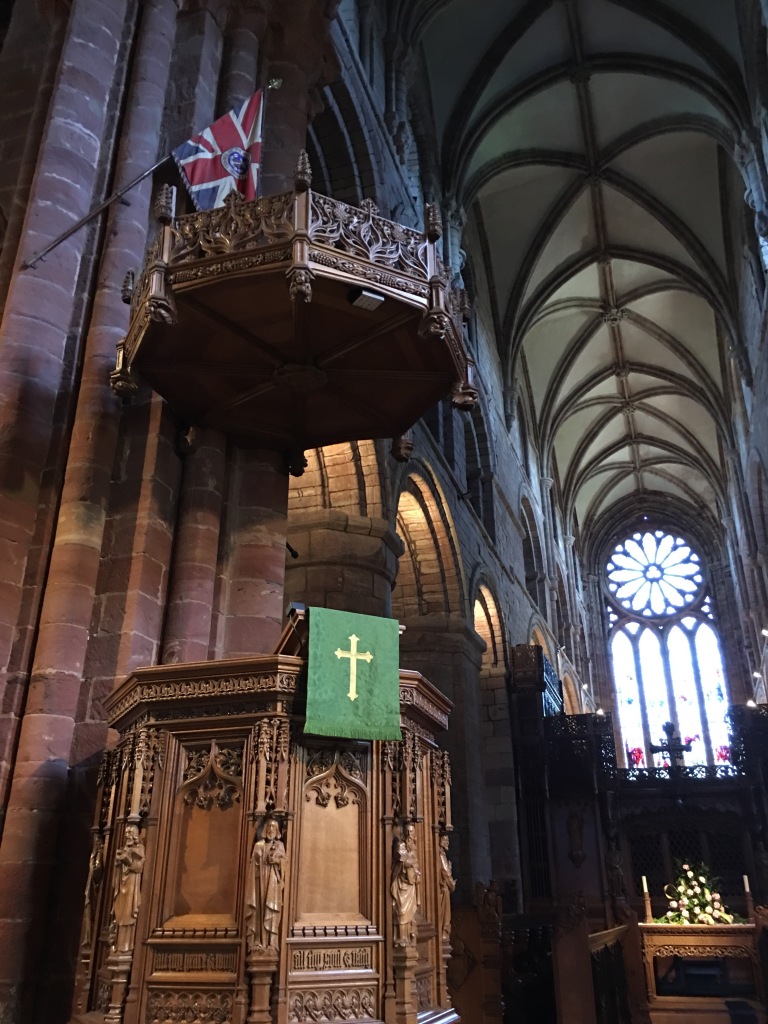 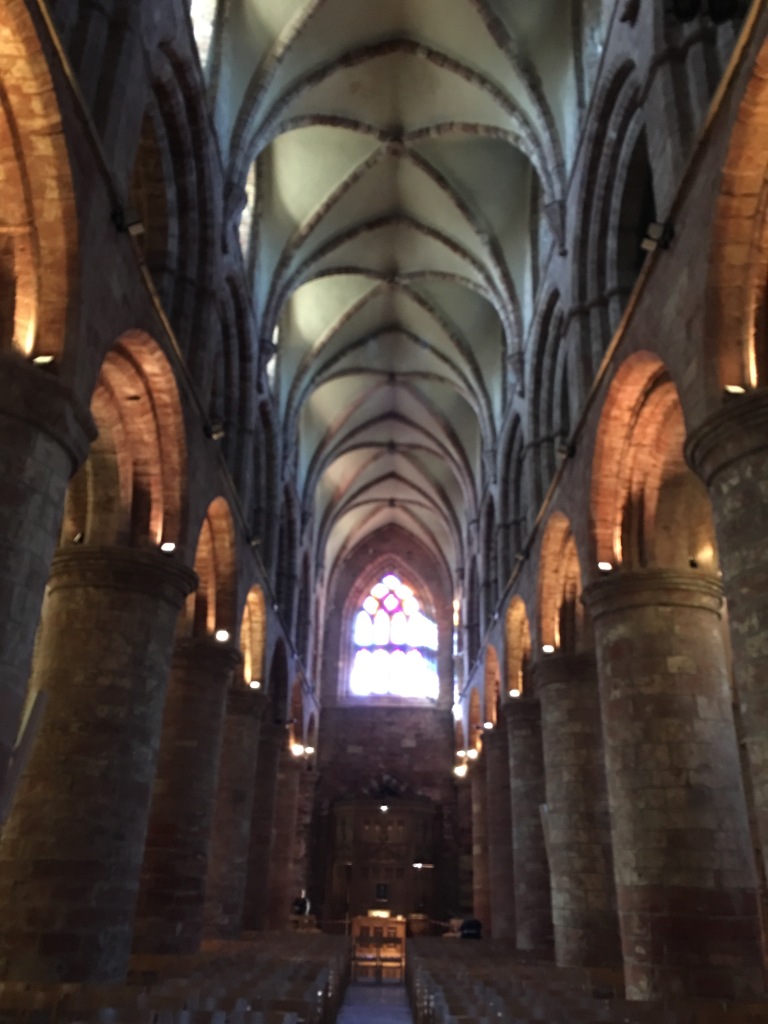 Back to the ferry for another smooth crossing, dinner and repacking to move on in the morning.  It was a fascinating trip and one of the reasons I chose this particular tour.

Hopefully the next stop will have bigger sleeping quarters for us!